Riehen (in Basel German Rieche [ ˈʀiəχə ]) is one of three municipalities within the canton of Basel-Stadt in Switzerland , along with the city of Basel and Bettingen . With over 20,000 inhabitants, it is the second largest municipality in north-western Switzerland .

The community is commonly counted among the wealthier suburbs of Basel. Among other things, it houses the internationally famous Fondation Beyeler , which is considered the most visited art museum in Switzerland.

Riehen is located at the lower end of the Wiesental and belongs to the agglomeration of the city of Basel . 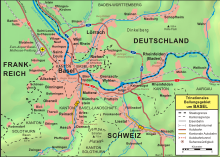 Riehen in the border triangle

The communities directly adjacent to Riehen are:

In the north, the Iron Hand forms part of the border with the neighboring German communities of Lörrach and Inzlingen.

Barricade on the border between Germany and Switzerland at the main customs office in Riehen, Division 4, 1914–1918

Neanderthals were already in this area 50,000 years ago . A permanent and continuous settlement is suspected since around 3000 BC. Around the 6th century AD, the Alemanni founded a village. The first written mention of "Wahinhofen" in 751 refers to today's Wenkenhof . The first mention of the name Riehen comes from 1113.

In 1270 Riehen belonged to the Principality of Basel. From 1444 to 1446 Riehen was plundered and sacked as a result of the battle of St. Jakob an der Birs , and also from 1490 to 1493 during the Kappel feud . In 1522 Riehen came into the possession of the city of Basel and introduced the Reformation in 1528 . During the Thirty Years War , Riehen received a military occupation. The village was also visited by many refugees.

In 1833 the cantons of Basel were separated . Riehen remained in the canton of Basel-Stadt, together with Kleinhüningen (a district of Basel since 1908) and the adjacent, much smaller municipality of Bettingen .

During the Second World War there was a (temporary) wave of emigration to the interior of Switzerland. The Riehen memorial in the railway keeper's house commemorates the fate of refugees.

In 1958, Riehen was the first Swiss municipality to introduce women’s right to vote in the civil parish .

A geothermal reservoir at a depth of around 1,500 meters has been used since 1994 , which supplies over 8,000 residents with heat .

In total, the municipality of Riehen submitted three proposals (in each case in 1885, 1898 and 1910) for a municipality merger with the city of Basel, which were ultimately not implemented.

The Riehen coat of arms is a floating, triple silver stepped gable on a blue background. It goes back to the coat of arms of the von Riehen family attested to in Freiburg im Breisgau and appears for the first time in 1536 in an inventory of the village church as a community coat of arms . It was given its current form in 1948.

The residents' council is the highest municipal authority and consists of 40 members. He is elected according to the proportional system for a term of four years. If a member leaves the council, the one with the most votes of all non-elected members on the same list moves up. The residents' council meetings take place once a month and are public.

The distribution of seats in the residents' council:

The seven-member council (including the mayor) is elected every four years according to the majority system. If not all seats can be awarded in the first ballot, where there is an absolute majority, there is a second ballot, which is held after the relative majority. If a member leaves the local council, a substitute election takes place at the ballot box (as happened in the unexpected death of the mayor Michael Raith in the summer of 2005).

Members of the municipal council in the 2018–2022 legislative period: 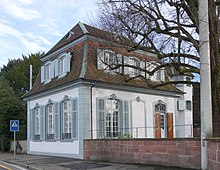 Partner communities in Riehens are Mutten in the canton of Graubünden and Miercurea Ciuc in Romania .

Together with the city of Basel, Riehen belongs to Zone 10 of the Northwestern Switzerland tariff association . Riehen has a dense bus network that is used by large articulated buses and small local buses. With the tram line 6 and the bus line 34 of the Basler Verkehrs-Betriebe , Riehen is connected to the city center of Basel. Riehen is also served by tram line 2 Monday to Friday (4:00 p.m. - 7:00 p.m.). From 8:00 p.m., taxis, which replace the small bus routes, can be called from “Riehen Dorf”. They can also be ordered for the trip from home to the “Riehen Dorf” tram station. Between 1948 and 2008, the community was also served by line 31 of the former Basel trolleybus .

Riehen is on the Wiesentalbahn , the S6 line of the Basel S-Bahn . Between 2004 and 2008, the Wiesentalbahn - Deutsche Bahn is responsible - was massively expanded. In Riehen itself, the train station was renewed and the new Niederholz stop was built in the south of the settlement area. The line is used by SBB GmbH with trains of the Stadler Flirt type ; it was extended to Basel SBB station in December 2006 . The trains run every 30 minutes on weekdays and every 60 minutes on weekends. The connection ends on the German side at Zell (Wiesental) train station .

Because of the ban on cabotage , the trains were not allowed to travel between the Riehen station on Swiss territory and Basel.

The village center has long been heavily burdened by commuter and heavy traffic flowing through it. In addition, the Baselstrasse, which is very busy every day, is to be completely renovated from 2015 to probably 2020, so that during this time an additional, significantly increased volume of traffic can be expected on the entire Riehen-Basel axis.

The two German cities of Lörrach and Weil am Rhein, both of which border Riehen, have been striving for a direct and duty-free road connection for more than a hundred years , but this was only feasible via Swiss territory. It runs 700 meters over the district of Riehen, required a bridge over the Wiese River and touches a swimming pool. Despite considerable protests, the road was built and opened to traffic on October 4, 2013.

The school is divided into three levels in the canton of Basel-Stadt .

The Basel gallery owner couple Hildy and Ernst Beyeler founded the Fondation Beyeler and made their art collection permanently accessible to the public in 1997 in a museum designed by the architect Renzo Piano . In addition to the works of art owned by the Beyelers - mainly pictures of classical modernism and oceanic art - there are also large exhibitions on a regular basis. For example, in 1998 Christo and Jeanne-Claude packed almost 200 trees in front of the building in their typical way. 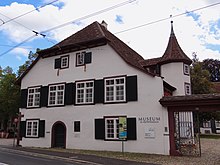 In the Old Wettsteinhaus, which dates back to the 17th century, is the toy museum, village and vine growing museum . It houses an extensive collection of European toys of all kinds, but mainly wooden toys , dollhouses and kitchens , tin toys , lead and tin figures , paper theaters and trains .

The art space Riehen in the former country estate “ Berowergut ” is the municipal exhibition building of the municipality of Riehen and its art commission. The presentations that have been taking place in the Kunst Raum Riehen since 1998 are dedicated to contemporary art in the region.

See also the list of sacred buildings in Basel

The Reformed Church of St. Martin is located in the historic center of Riehens and has only been slightly changed in its late Gothic style since 1694. The tower was built in 1395 and is 41 meters high.

The Riehener deaconess house with hospital was set up in 1852 on the initiative of Christian Friedrich Spittler based on the model of the deaconess mother house in Düsseldorf-Kaiserswerth in an original cooperage and wine merchant house that dates back to the Middle Ages and has since been rebuilt and expanded several times. The hospital has been operated by the municipality of Riehen since 1972, but since 2010 the hospital has been closed and a health center set up due to high costs. Today the deaconesses of Riehen are an evangelical community based on the rules of the Catholic Benedictine order .

The St. Franziskus Church is the Roman Catholic Church for the communities of Riehen and Bettingen.

There are some very large, well-kept parks in Riehen. These include the Wenkenhof , which also has a riding arena, the Sarasin Park, the park of the Bäumlihof estate (also known as "Klein Riehen") and the Wettstein facility.

Riehen is surrounded on the east side by Bettinger forest and on the west side by the long alder trees. These green zones are also what enable living in the country without having to forego the advantages of the city. The Riehen natural swimming pool, which opened in 2014, is located on the edge of this green zone .

Political communities in the canton of Basel-Stadt