The title of this article is ambiguous. Further meanings are listed under agglomeration (definition of terms ) .

An agglomeration - from Latin agglomerare `` firmly connect '', ( synonymous also: English urban area and largely synonymous in German: conurbation , conurbation , urban region or agglomeration ) - describes a concentration of settlements consisting of several, mutually intertwined communities , which are opposite to their Surrounding area is characterized by a higher settlement density and a higher proportion of settlement area.

As a rule, an agglomeration is grouped around one or more core cities , which are surrounded by a narrower, densely built-up suburban suburban belt and a geographically more extensive, partly rural catchment area. Major cities and their extensive catchment areas form metropolitan regions , the area of ​​which is usually larger than that of the agglomeration in them. One example is the area of Hovedstadsområdet around the Danish capital and the surrounding Öresund region , the region in and around the cities of Copenhagen and Malmö . The term regiopole is also used for metropolitan areas with a regional focus outside of metropolises , the surrounding area is called the regiopole region .

Depending on whether one or more regional centers exist in an agglomeration, a distinction is made between monocentric and polycentric agglomerations.

Other frequently used terms for such an area are, as mentioned, e.g. B. City region , metropolitan area and metropolitan area . Although these terms essentially refer to the same thing, there are minor nuances of meaning depending on how they are interpreted. In contrast to the broader terms of the greater region , metropolitan region or economic region , the urban region does not include the rural, peripheral sub-areas, but only the immediate, densely built-up area around the city center. But also settlements that are not directly adjacent to the core city can be counted as part of the urban region if the majority of the inhabitants work in the core city.

The criteria according to which figures are calculated for all of these terms ultimately depends on the delimitation method used in each case. There is no reliable standardization for these procedures, which is why the figures for different regions are only partially comparable. 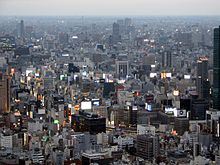 In legal texts and other publications of the European Union was held in the German translations of the term conurbation input, while in English texts agglomeration is used. In the EU directive on air quality (2008/50 / EG) , agglomeration and metropolitan area are defined equally:

The Statistical Office of the European Union uses the term Functional Urban Area (FUA), until 2014 also Larger Urban Zone (LUZ), to denote the functionally delimited urban area in the vicinity of a core city . In Brussels, for example, a distinction is made between the city (in the English sense, not the municipality of Brussels , but the capital region of Brussels ) with 1.2 million inhabitants and the functional urban area with 2.6 million inhabitants. According to a harmonized procedure, 323 urban regions in the European Union and 47 cities in Norway , Switzerland , Turkey and Croatia are currently defined, for which statistical data and indicators for quality of life have been collected and published as part of the Urban Audit since 2003/2004 .

Agglomeration is an ( urban ) area with a high population density. The otherwise largely synonymous term agglomeration is linguistically more precise because it is internationally standardized .

In the European Environmental Noise Directive 2002/49 / EC as a metropolitan area defines a zusammhängendes settlement area. This definition was adopted when the directive was implemented in German law through Section 47b of the Federal Immission Control Act . There is only an immediate legal consequence for the noise mapping or the information obligation of the authorities. Further legal claims - at least according to German law - cannot yet be derived from this.

The same order of magnitude can be found in the European guidelines for the clean air plan. According to this, the air quality should be recorded with measurements in all cities or urban agglomerations.

According to § 47 para. 1 i. V. m. Sections 27 to 29 of the 39th BImSchV stipulate air pollution control measures and can also be enforced by citizens and associations.

The metropolitan areas can, but do not have to, correspond to the respective political or administrative boundaries.

According to the “ Anthrome ” model published in 2008 by the two American geographers Erle C. Ellis and Navin Ramankutty , around 30% of all people on earth live in urban areas. While in the past metropolitan areas mainly formed around ports, storage facilities, industry and transport hubs, a strong change in the economic value creation causes the formation of metropolitan areas around research institutions and the associated economic networks.

In addition to the above-mentioned methodologies used by the UN and the EU, there are different definitions and delimitation criteria in different countries, legal norms and plans.

In Germany, the term agglomeration is hardly standardized, but it is used in different contexts. With regard to the number of inhabitants of cities in Germany, the number of inhabitants of the respective core city is usually given, figures from agglomerations or urban regions are less common. From a spatial planning perspective, however, there are two important spatial structural classification systems:

Both classifications represent a further development of the 70 city regions developed by Olaf Boustedt in the 1950s . Boustedt assumed that the cities would grow beyond their administrative boundaries, while at the same time the surrounding municipalities of the city adopt similar characteristics and thus form a coherent agglomeration. Both the BBR classification and the BIK regions are based on the data on commuter integration for employees subject to social insurance from the Federal Employment Agency . They differ with regard to the underlying structural level. While the typifications of the BBSR are based on the municipal associations, the BIK regions are based on the smallest administrative structure level, the municipalities.

As concentrations of living and working functions, the agglomerations are engines of economic development and arenas of cultural life and are therefore of importance for the entire country. As a room category, agglomeration or compression areas form the type of room with the highest density of use and form the opposite pole to the sparsely populated rural areas. The connecting axes between the agglomerations, some of which extend through the rural area, are called corridors.

Ratio within an agglomeration

Agglomerations are rarely grouped together in a single political administrative unit. As a rule, there is a strong political contrast between the core city and the politically independent suburbs, which is intensified in some cases by traditional rivalries, but almost always by the social , fiscal and settlement-structural effects of suburbanization .

Due to the ongoing intraregional shift in importance and population in favor of the surrounding area, the accumulation of socially disadvantaged people in the core cities, the provision or financing of infrastructure of regional importance (e.g. transport networks, cultural and leisure facilities) by the core cities without the financial participation of the suburbs benefiting from it as well as the ruinous competition for the settlement of companies ( trade tax dumping) the core cities get into ever greater difficulties. The financial and functional depletion can weaken a core city so much that it is no longer able to fulfill its central regional functions, which ultimately damages the entire urban region including the suburbs.

Since cities in Germany are divided uniformly into upper and middle centers in the regional planning , agglomerations in Germany can be divided into poly- and monocentral areas.

Many of the agglomerations in Germany are part of a larger European metropolitan region . Due to the frequent amalgamation of agglomerations, there are hardly any monocentral metropolitan regions in Germany, whereas it is more the rule in agglomerations that they are only formed around a regional center. According to the state planning, Aachen, Dresden, Hamburg, Munich and Stuttgart are the only regional centers in their agglomerations. In geographic reality, however, these formal definitions are opposed to large sub-centers within the urban areas of large cities, some of which achieve the functional importance of regional centers (including Berlin-Spandau , Frankfurt-Höchst , Hamburg-Harburg or Munich-Pasing ).

There are also cross-border metropolitan areas on German territory that have their center in a city outside Germany, such as Stettin and Basel ( TEB ). A special form of cross-border cooperation in metropolitan areas are the Eurodistricts , including Strasbourg-Ortenau , PAMINA , Saar-Moselle and the Freiburg / southern Alsace region .

The Statistics Austria has defined 34 statistical city regions on a core area of the city (as central site ) and its surrounding communities, and an outer zone based.

Together they comprised 5.567 million inhabitants (as of January 1, 2001), which is around 64% of the total population of Austria . Three quarters of this (3.81 million) were in the core zones and around 1.35 million in the outer zones.

According to the population of the urban region, four size classes can be distinguished:

The last delimitation was made in 2001.

Eurostat divides Austria into five major metropolitan regions, Vienna being the largest and Innsbruck the smallest.

Since 1930, the urban agglomerations have been statistically delimited every ten years based on the results of the censuses . Since 1980, municipalities located abroad have also been taken into account in cross-border agglomerations, which is important for Basel , Geneva and Lugano .

The following table shows the ten largest agglomerations (2000 / in brackets the population without the foreign part):

The largest agglomerations on earth with over ten million inhabitants are: 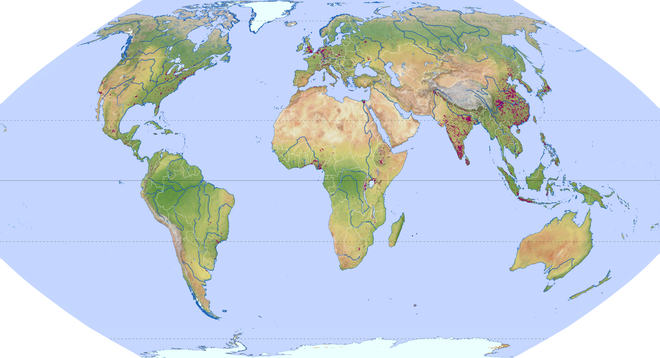 The data given can hardly be compared as different definitions were used depending on the city.

For US cities, for example, the figures for the expanded metropolitan regions, the Combined Statistical Areas, are shown, while for the agglomerations, however, the areas designated as Urban Areas would actually have to be used, whose population is significantly lower (in the case of Los Angeles, for example, 12 instead of 18 million ).

Another problem is the national delimitation of agglomerations. In the above list, for example, the Aachen agglomeration is only described using the German side of the urban area, although cities such as Heerlen or Kerkrade in the Netherlands are also included in this area.