View of Lahore and the Badshahi Mosque

Lahore ( laˈhoːɐ̯ , Panjabi لہور Lahaur , in Gurmukhi script ਲਾਹੌਰ IAST Lāhaur , Urdu لاہور Lāhaur ; Hindi लाहौर IAST Lāhaur ; English Lahore ) is the second largest city in Pakistan after Karachi with 11,126,285 inhabitants (as of 2017). It is the historical capital of Punjab and today as the capital of the Pakistani province of Punjab and historical cultural center of Pakistan, it is the industrial and cultural center of northeastern Pakistan.

Lahore lies on the banks of the Ravi River at an altitude of about 215 m above sea level. d. M. only a few kilometers from the border with India . The closest major city is Amritsar in India, about 55 km to the east .

Lahore is connected to the hinterland cities by both road and rail; India and Pakistan agreed to set up a bus connection between Lahore and Delhi in peace talks in 1999 . After an interruption from 2001 to 2003 due to the crisis of the attack on the Indian parliament in 2001, the buses have been running regularly since then.

The infrastructure in Lahore has been part of the ruling parties' party program for several years, as traffic is a significant problem. In addition to cars, motorcycles and auto rickshaws are particularly common on the roads, as they save more space and get through traffic jams more quickly. The consequences are massive congestion phases and the associated environmental pollution. In order to escape these problems, the Project Orange Line Train was launched in 2016 in cooperation with the Chinese National Development Reforms Commission. The above-ground rail system on pillars is intended to shift traffic upwards and reduce long waiting times and CO2 levels. The mega-project is expected to cost 1.6 billion dollars and be presented within 27 months as an alternative to local public transport.

In 2003 Lahore Airport was rebuilt. The airport is named after Muhammad Iqbal Allama Iqbal Airport . Today it serves many airlines, including the Pakistani airline Pakistan International Airlines .

Around 94% of the population are Muslims (1941: around 60%), Hindus , Christians, Sikhs , Buddhists , Baha'i and other religious groups form small minorities.

Since the splendid old town is particularly densely built and does not allow any new buildings, the outlying areas of the city have been developed and made habitable for many years. The districts around the old town were built in the style of closed residential communities, as these score particularly well due to their security with their own security staff. Defense and Bahria Town are the forerunners, with these mainly housing the upper class. For some years now, other districts have only offered closed residential communities that offer everything from hospitals, which are available specifically and free of charge to residents, to schools, universities, shopping centers and various leisure activities, thus increasing the feeling of life.

Lahore is the craft, mercantile, industrial and service center of the Pakistani part of Punjab. Here are schools and universities as well as clinics, etc.

Lahore is home to some of the oldest institutes in the country. In terms of the educational system, Lahore is the most developed city in Pakistan as it produces the most professionals in IT, engineering, medicine, nuclear science, pharmacy, biotechnology and economics. The national education system is heavily influenced by the UK system, which is why many degrees are internationally recognized. The city offers numerous universities, with private institutes being built more and more in recent years. Particularly renowned universities and schools include the University of Engineering and Technology, Lahore (UET Lahore), the University of Management and Technology (UMT), the Lahore University of Management Sciences (LUMS), the National College of Arts (NCA), King Edward Medical University, the University of the Punjab, Aitchison College, St. Anthony's College, Bloomfield Hall Schools (BHS), Lahore Grammar School (LGS), and the Beaconhouse School System. The University of the Punjab is also the only university in South Asia that is a partner in various experiments at CERN Laboratories.

Lahore is considered to be the stronghold of the Pakistani film industry and, based on Hollywood and Bollywood, is also called Lollywood . In contrast to Indian film , which has gained international renown in recent years, the Pakistani film industry has been in a crisis for years. Even high-quality productions are barely noticed outside of Pakistan. 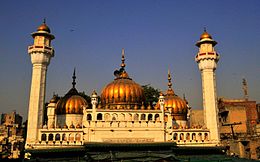 The city's history goes back at least 2000 years, with some historians also speaking of dates that go back as far as 4000 years. Since the 11th century Lahore has been one of the spiritual centers of Islam on the Indian subcontinent ; the city was the capital of the Mughal Empire between 1585 and 1598 . The Mughal ruler Akbar I was the initiator of the grandeur of Lahore in the 16th century and made the city one of the centers of Islamic culture on the subcontinent. Until the completion of the capital Shahjahanabad (today Old Delhi) by Emperor Shah Jahan , Lahore remained next to Agra , Delhiand Ajmer, one of the Mughal capitals where the emperors regularly resided. Even afterwards it remained an extremely important city because of its strategic importance as the center of Punjab and the starting point for the roads to the north. Important writers of the Mughal period from Lahore are above all Munir Lahauri, known for his sophisticated poems and essays, and the classic letter and essay writer Chandar Bhan Brahman, who was Shah Jahan's secretary

From 1799 until the conquest by English troops in 1848, Lahore was the capital of the Sikh Empire . Today it is one of the seats of the University of the Punjab, founded in 1882 . Lahore also plays an important role in modern history. It is considered the birthplace of independent Pakistan, as it was here that the future of the country and its independence were decided. A monument to this movement is the Minar-e Pakistan tower, which was built there after independence in 1947.

Muhammad Iqbal (1877–1938), who was posthumously chosen as the national poet of Pakistan, also lived in Lahore , whose philosophy of a humanistic Islam has recently attracted interest in Europe.

While Lahore was a cosmopolitan, tolerant metropolis at the time of British India , in which many religious communities lived side by side, the city in independent Pakistan has become a site of Islamist violence in recent decades. On March 3, 2009, there was an attack on the Sri Lankan cricket team . Armed men fired rocket launchers and machine guns at the crew's bus in Lahore - at least seven people died, including a. six players and a coach were injured. In March 2013, angry Muslims attacked the Christian minority in the Joseph Colony district after a Muslim blasphemy a Christian in a dispute between two acquaintanceshad accused. The mob burned or destroyed two churches and more than 150 houses of Christian families. The police did not intervene. The unwillingness of the police and authorities to protect the Christians led to a mass exodus; about 4,000 Christians left Lahore. At the 1998 census, Christians made up 5.8% of the city's population. An Islamist-motivated suicide attack in front of the Lahore police headquarters on February 18, 2015 claimed four lives. On March 27, 2016, there was an Islamist terrorist attack in Gulshan-e-Iqbal Park , targeting the Christian minority who celebrated Easter there. More than 70 people died.

Nonetheless, Lahore continues to be a center of culture, music, sports and fashion in Pakistan. It is home to three cricket teams (Lahore Qalandars, Lahore Lions, Lahore Eagles) as well as the football club WAPDA FC. Lahore Fashion Week is Pakistan's second largest after Karachi. Also known is the Lahore Literary Festival and the rich Lahore cuisine, especially known for its meat dishes.

Lahore has partnerships with the following cities:

The city of Nankana Sahib west of Lahore is an important pilgrimage site for the Sikhs .