This article deals with the designation of the members of Islam. For namesake see Muslim (disambiguation) . 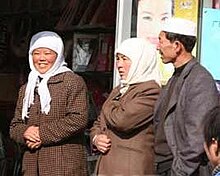 A Muslim or (now rarer) Muslim ( Arabic مسلم muslim ) is a member of Islam or a child of Muslim parents and is also (colloquially obsolete) referred to as a Mohammedan (actually a 'follower of the teachings of Muhammad '). The word Muslim is the active participle of the IV tribe ofسلم salima 'to be safe , to be intact' →أسلم aslama 'surrender, surrender, submit': " The surrender (to God) ". The submission expressed in the IV tribeis not to be understood in the sense of a worldly surrender, which is expressed with the X tribe:استسلم istaslama 'surrender' →مستسلم mustaslim 'the surrender'.

The female form in English is Muslim , Moslem or (rarely) Muslims . Since the 1990s, the Arabic word muslima has increasingly been used for the female form . The term Muselman , formerly also " Muselmann " (cf. also Persian مسلمان, DMG mosalmān ), is considered historical-literary to outdated in German, but in forms that are reminiscent of this term it is part of the current usage in several other languages, including those of Islamic countries (e.g. French Musulman , Turkish Müslüman , Persian Mosalman ).

In 2009 the number of Muslims worldwide was estimated at 1.57 billion. This makes them the second largest religious community after the Christians .

The number of Muslims in Germany is estimated on the basis of origin and membership in Islamic associations , since Islam is not organized in religious societies under public law in which Muslims are registered members. Islam has no status comparable to church membership.

As a religious name

A Muslim is someone who has spoken the Islamic creed ( Shahāda in Arabic ) with full awareness. It is binding under Islamic law if he speaks this in front of two adult Muslim witnesses. According to Islamic self-understanding, every newborn is a Muslim ( see Fitra ) and may only be dissuaded from the Islamic faith later by external influences (e.g. upbringing). When they reach sexual maturity, they also express this by speaking the creed (including with every prayer ).

According to Islamic self-understanding, a Muslim is a monotheist who recognizes Muhammad as the last prophet of God ( Allah ). Orthodox Muslims believe that the Qur'an is the revealed word of God transmitted to Muhammad through the Archangel Gabriel .

The Hanafi legal scholar asch-Shaibānī quotes in his Kitāb as-Siyar a hadith according to which the Prophet Mohammed said: "Muslims should support one another against outsiders, the blood of all Muslims has the same value, and the one who is the lowest ( ie the slave), can bind everyone else if he swears an oath of allegiance . "

In the Koran, a distinction is made between Muslims who profess Islam formally and real believers ( mu'min ):

“The desert Arabs said,“ We ​​believe! ”Tell them,“ You do not believe. Rather say: 'We only seemingly surrendered' (accepted Islam). Faith has not entered your hearts. When you obey God and His Messenger, God fully rewards you for your works. ”God is full of forgiveness and mercy.
The true believers ( mu'min ) are those who have confessed to God and His Messenger and have no doubt and fight with their wealth and their lives on God's way. These are the righteous. "

“We have accepted Islam” ( aslamnā ), the profession of Islam, is only an utterance ( qaul = “slogan”), but belief ( īmān ) is both utterance and deed. The acceptance of Islam through verbal expression during Muhammad's work was initially the guarantee that the Arab tribes of the Arabian Peninsula would no longer be fought by the Muslims. The Koran thus ranks faith higher than the mere formal entry into Islam. At this point, exegesis interprets the key word aslamnā (“we have accepted Islam”) not only in the usual sense of submission to the (only) God, but also understands the words of the Bedouins in the sense of “surrender” and “surrender” “( Istaslamnā ) for fear of imprisonment and further armed conflict.

The Sufis also differentiate between a Muslim and a "believer". In their opinion, a Muslim only outwardly submits to the commandments of God, but a believer also firmly believes in them and is aware that he "stands before his Creator" without interruption.

As an ethnic name

In some countries the term “Muslim” is or was also used as an ethnic name . This was the case, for example, in the Socialist Federal Republic of Yugoslavia (1962–1992). Here, in the 1960s, Muslim Marxist historians produced a large number of works on the history of the Bosnian Muslims and provided “scientific” legitimation for the recognition of a Muslim state nation. In the 1971 census, the overwhelming majority of Bosnian Muslims indicated their nationality as “Muslim in the sense of a nation”. This designation was officially recognized in the new Yugoslav constitution in 1974. One problem with the concept of the new Bosnian Muslim nationality was its ambiguity, because the term could mean membership of a religious community as well as a nationality. An atheist of Muslim nationality could therefore not be distinguished from a Muslim believer of another nationality (Albanian, Turkish). To overcome the problem, the word Muslim was capitalized when it denoted nationality ( Musliman ), when it denoted religious affiliation, it was capitalized with a lowercase letter ( musliman ). Yugoslav politics subsequently endeavored to keep the Muslim nationality concept away from any religious connotation, but anthropological studies have shown that this distinction could not be fully upheld. Even in the 1980s, for many Bosnian Muslims, national identity was still closely linked to Islam.

The term “Mohammedaner” for a Muslim is generally rejected by Muslims in the German-speaking area, as Mohammed is admitted but not worshiped and thus - measured against the term “Christian” - does not have the status of Jesus in Christianity .

The arabic muhammadi  /محمدي / muḥammadī  / 'mohammedanisch, Mohammedaner', on the other hand, is also found in other Islamic literary languages ​​such as Persian , ( Ottoman ) Turkish or Urdu .

The deification of Muhammad is not entirely alien to individual currents of Islam: Muhammadiyya (“The Mohammedans”) in Iraq in the 8th and 9th centuries was considered to be both the unknown god who did not open up to man and the only one true manifestation of God on earth. Also in some currents of Sufism from around 1100 a not undisputed Mohammed mysticism sets in, for which Mohammed is logos or universal spiritual being that is accordingly revered.

In Arabic-speaking Islamic literature, e.g. B. in the Koran exegesis of Ibn Kathīr , the expressions such as “prophetic legislation” are used as a synonym for “Mohammedan legislation”. The Islamic community also calls Ibn Kathir the "Mohammedan Umma". In addition to the Sunna of the Prophet Mohammed, Ibn Hajar al-naAsqalānī also speaks of the "Mohammedan Sunna" or the "Mohammedan message".