The Shahada ( Arabic الشهادة, DMG aš-šahāda  , testimony, testimony '), also Taschahhud ( Arabic تشهد, DMG tašahhud ) is the creed of Islam , which forms the first of the five pillars of Islam .

The meaning of the Shahāda, which as such does not appear in the Koran, is only emphasized in a Ḥadīṯ traced back to the Prophet Mohammed : “When the servant [of God] says: 'There is no God but God', then the exalted God says: ' My angels, my servant know that he has no master but me. You are my witnesses that I have forgiven him. '"

The wording of the Shahada is also known as Kalima .

The second part of the creed is the confirmation of Muhammad as God's messenger:

The form of the Shahāda presented above is, however, the result of ritual-legal compromises among the scholars of the legal schools , because according to traditions in traditional literature Mohammed is said to have taught:

“The greetings are for God, as are the blessings and the good things. Peace be upon you, Prophet, and God's mercy and blessings. Peace be with us and with the pious worshipers. I testify ... etc. "

The Islamic schools of law fall back on different versions of tradition in the wording of the alleged prophet's saying. However, in terms of ritual law, they all agree that the above form of greeting is not a compulsory part of the prayer ritual.

During the call to prayer ( Adhān ), after the four times Takbīr, both parts of the Shahāda are introduced with aschhadu an or anna أشهد أن "I testify that ...", spoken twice each time.

The Shahāda appears in a sacred building for the first time in the outer inscription on the Dome of the Rock from the year 691/692 in its combination with the Basmala as follows:

In secular life the Shahāda appears on Umayyad coins as early as around 705–714 and a little later. On the front (or on the edge) it says: lā ilāha illā ʾllāh…; on the reverse: Muḥammad rasūlu ʾllāhi; on the edge is the date of issue.

A variant of the Shahāda is documented in a protocol on papyrus from the year 705 in the following wording, as on the Dome of the Rock: lā ilāha illā ʾllāhu waḥdahu lā šarīka la-hu Muḥammadun rasūlu ʾllāhi - based on sura 6, verse 163: lā šarīka la-hu: "He has no partner (in rulership)".

A rock inscription from the central Negev , which was formulated on papyrus as in the above protocol and - this time with the addition: wa-ʿabduhu, "his servant ," shows that the Shahāda in the secular area did not take on a final form until the last decades of the 8th century “- is dated to the year 780–781.

In another rock inscription in this region, besides the name of Muhammad, ʿĪsā ibn Maryam , Jesus, son of Mary, is mentioned in the declaration of the creed . Subsequently, the idea of ​​pronounced monotheism according to sura 112 , verse 3 is expressed: “It testifies that God (is) one and only, God is the ruler, he does not (!) And has not been begotten. He wrote it in the year 197 ”(i.e. 812–813).

Epigraphic finds south of Medina from the late 8th century show that the above variant of the Shahada was also used in the 3rd Pers. Sing. Had formulated; it is then preceded by the name of the author. At the end, the eulogy is added after the name of the prophet:

The creed is the lettering on the flag of Saudi Arabia, the state whose territory includes the home of the Prophet Mohammed.

A number of Sufis (Islamic mystics), as a result of their multidimensional, dogmatically independent basic attitude, shorten the first part of the complete Shahāda to a formula that is repeated in the Dhikr ceremonies:

Another different Shahada formula is:

Most Sufis, however, are of the opinion that the second part of the Shahada is very important because Shaitan ( Arabic for Satan ) himself also accepts the first part of the Shahada. After all, he himself knows very well that there is only one God; However, he rejects Mohammed as a prophet . 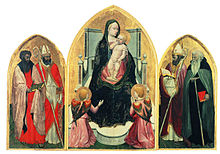 On the way from Florence to Arezzo in a small church in San Giovenale a Cascia, the Italian monument conservator Luciano Berti identified a hitherto unknown work, a triptych by the founder of the early Renaissance painting Masaccio (1401–1428). A few years later, the German orientalist Rudolf Sellheim was made aware of the published picture of the Madonna with the halo, which may possibly have oriental (Arabic) lettering. The phenomenon of using Arabic characters, even in an alienated form and distorted beyond recognition, has been known in medieval art since the 11th century - in book , glass , panel and wall painting . R. Sellheim stated that Masaccio had integrated the Islamic creed into the halo of the Madonna - albeit in a mirror image.

The work is dated April 23, 1422. It is believed that Masaccio's work was originally placed in the Brancacci Chapel of Santa Maria del Carmine . However, it is unclear how Masaccio came into possession of the Shahada’s motifs. You and the ligature of Allah in its combination of the letters Alif - Lām - LAM Hā' are in the ornamentation has been used more than once that time.