Drawing of the fragment of a grave inscription from Rome ( AE 1966, 26 ) by the epigraphist Géza Alföldy , with careful additions of broken letters and notes on the dimensions and the place of storage

The epigraphy or epigraphy (German " inscriptions ", from ancient Greek ἐπιγραφή epigraphē "inscription, inscription") is a historical auxiliary science . It deals with inscriptions or inscriptions on various materials such as wood, stone, glass, marble, metal, leather and others. Epigraphy is particularly important for ancient history .

Tomb of the Alberada of Buonalbergo in Venosa, late 11th century

The science of epigraphy has been developing steadily since the 16th century. The basics of epigraphy vary depending on the writing culture . Science in Europe initially focused on the Latin inscriptions. The largest collection of Latin and Greek inscriptions was founded in Berlin in the 19th century .

One of the most important institutions that deals with ancient inscriptions in Germany is the Munich-based Commission for Ancient History and Epigraphy of the German Archaeological Institute . The Canadian Center for Epigraphic Documents is one of the largest of its kind in America. Scholars who have contributed to the development of the discipline can be found in the list of well-known epigraphers .

The German and Austrian publishing company Die Deutsche Insschriften is working on the processing of inscriptions from the Middle Ages and modern times . In Munich, the Epigraphic Research and Documentation Center serves as the central point of contact for questions about epigraphy from the Middle Ages and the early modern period throughout Europe.

Inscription of the Trajan Column

Since such inscriptions are more durable than documents on ordinary writing materials such as paper or parchment, epigraphic sources are often the only means of obtaining contemporary information about extinct cultures.

In order to denote the extent to which inscriptions were set, as well as the usual occasions and contents, ancient historians refer to Ramsay MacMullen mostly of the epigraphic habit ("epigraphic habit") of a certain time. The oldest ancient Greek inscriptions date from the late 8th century BC. BC, from the Hellenism onwards they become much more common. The Latin epigraphy deals with all traditional Latin written documents from Roman times . Overall, it can be observed in antiquity that the number and quality of the surviving epigraphic evidence has increased sharply since Emperor Augustus , reached a peak in the 2nd century and decreased rapidly around the year 260 (according to some researchers, however, this can be explained by the fact that now more and more transient materials have been written). Nevertheless, Greek and Latin inscriptions were still used in late antiquity - in the west of the Mediterranean region up to the 6th century, and in the east for a few decades longer. Traditionally, the “end point” of Latin epigraphy is usually the end of the Visigoth Empire in 711, but although the tradition of secular epigraphy was almost completely extinct for some time, texts were still engraved in the Middle Ages, especially in a religious context - not least, of course, grave inscriptions.

Much was lost in ancient times, however. Much of the ancient inscriptions were engraved in marble, which was later often burned into lime (this is still done in some remote regions today); other inscriptions, such as the lead pipe inscriptions and many decrees and laws, were placed on metal, which was often melted down, or on perishable material such as wood. As a result, most of the original inscriptions have been lost over the centuries. All that remains is a tiny, completely random section; Despite all of this, the number of ancient inscriptions known and published today still amounts to at least 600,000, of which around 150,000 are in Greek and 250,000 in Latin (Trout 2009). New discoveries are made every year; According to the renowned German epigraphist Klaus Hallof , the total number of ancient inscriptions preserved is likely to be more than 1,000,000.

Distribution of the inscriptions

In the course of time, the individual branches of science developed, which correspond to the division of the inscriptions according to different characteristics:

Distribution according to the inscription carrier

A distinction is made between different types of inscription that fulfill different functions:

The transitions between the types of inscription are fluid. For example, a building inscription can also be an honorary inscription if the inscribed building is an honor for a person.

Consecration stone for the goddess Noreia from the 1st century AD, which was used ("secondarily") as building material for the church on Ulrichsberg (Carinthia) in the late Middle Ages

In most corpora the inscriptions are organized according to where they were found. The analysis of a group of inscriptions is usually also based on their geographical distribution.

The location is another very important aspect of inscription research. The position or location of the inscriptions depends largely on their purpose or intent. When they are directly related to the sculptures, reliefs, or paintings with which they are associated, they often form a kind of pattern that fills background or empty spaces between the figures; but sometimes, especially in Mesopotamia, inscriptions on statues or reliefs are placed across the figures without any regard for the artistic effect. In late Greek or Roman times it is customary to place the inscription in connection with the statue or relief on which it is placed. Short inscriptions such as dedications or artist's signatures are often placed in some inconspicuous part of the work of art. In the case of the painted vases, the inscriptions relating to the subject have usually been painted, dedications and other inscriptions are often incised after the vase has been fired.

Copy of an Athenian list of dead from the 5th century BC Chr. 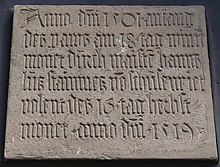 A significant part of epigraphy is the investigation and publication of newly found or unpublished inscriptions. This is done through a precise analysis and examination of the possible readings on the inscription carrier, but in the case of stone inscriptions also through the creation of copies . In this method, moistened paper (in some cases also liquid latex) is applied to the stone so that it takes on the shape of the chisel. Many inscriptions are often easier to see on a copy because the paper has a uniform color and can also be held against the light. Photography has been another important part of the study of inscriptions since the 20th century. Especially when the inscription is illuminated diagonally from the side, even small chiseled areas emerge more clearly as shadows and are therefore easier to recognize. For the publication of inscriptions - often in the form of corpora or articles in specialist journals - the Leiden bracket system has been used since the 1930s , with which it can be clearly identified which letters and symbols are still recognizable on the inscription carrier and which can only be recognized afterwards can still be tapped.

For a comprehensive analysis of epigraphic sources, in addition to the present text, the context in which it was created and attached must always be taken into account. Many conclusions can be drawn from the material (quality, origin, preciousness, effect), the shape and decoration of the inscription, the techniques used and the fonts and symbols used. In this context, palaeography is of particular importance. Another aspect of epigraphy is the determination and analysis of the context of the find and the possible original installation context, which is often based on the evaluation of archaeological findings .

Questions that epigraphy seeks to answer regarding the inscriptions under study include:

Latin epigraphy of the ancient world

Epigraphy of the Middle Ages and Modern Times