The German Archaeological Institute ( DAI ) is an international scientific research organization, which in 1829 in Rome as Instituto di corrispondenza archeologica was founded and today as a public institution of the Federal , headquartered in Berlin reports to the Foreign Office belongs. Its more than 350 employees work at 20 locations around the world and carry out excavations and research in the field of archeology , ancient and cultural studies .

The institute belongs to the division of the Federal Foreign Office of the Federal Republic of Germany . The institution has the right to scientific self-administration. Relationships are maintained with many scientific organizations worldwide; on the other hand, in addition to many German archaeologists and representatives from neighboring disciplines, many foreign researchers are also members of the DAI. Branch offices and research stations are maintained in several countries.

The DAI carries out archaeological and cultural-historical studies around the world and often works with scientists from the host countries and other international scholars. Traditionally the Mediterranean and the Middle East are the main areas of activity, and since 1979 it has also been worldwide. Excavations are carried out, expeditions undertaken and other projects carried out. Since 2009, the DAI has been building centers of excellence in research and teaching as part of the Foreign Science Policy initiative. The facility is one of the internationally recognized top research institutes. In order to maintain this standard, the DAI receives special research funds from the Genshagener program of the federal government.

The aim of the DAI is to ensure a deeper understanding of cultures among one another. It wants to make a contribution to the dialogue between cultures. In addition, it should contribute to Germany's high reputation in the world.

From the Hyperboreans in Rome to the Reich Institute in Berlin

The German Archaeological Institute was founded in the early days of archeology as a scientific discipline. Even before that there were learned societies with the Accademia Etrusca , which dealt with the material legacies of the ancient peoples, but this research was mostly of an antiquarian nature. The first thoughts on an organization arose in Rome in the 1820s among the " Roman Hyperboreans ", a group of friends of European scholars, artists and diplomats. They recognized that the new knowledge and artifacts that were being gained at an ever faster pace required a scientifically organized international cooperation. The early attempts to found such a Roman-Hyperborean Society are still echoed today in the logo of the DAI, which shows a Hyperborean griffin . On January 2, 1829, the archaeologist Eduard Gerhard , the Prussian ambassador Christian Karl Josias von Bunsen , the Hanover chargé d'affaires in Rome August Kestner , the Commissario della antichità Carlo Fea and the Danish sculptor Bertel Thorvaldsen called for the establishment of the Instituto di corrispondenza archeologica . The founding event took place on April 21st of that year, the mythical birthday of the city of Rome. The Prussian Crown Prince and later King Friedrich Wilhelm IV could be won as protector . The first president was the French envoy to the Kingdom of Naples , the Duc de Blacas d'Aulps . Secretaries were responsible for managing the company and the general secretary was in charge. After Blacas d'Aulp's death in 1839, Prince von Metternich became president in 1841 . After his death in 1859, the office for political and social representation, which was important in the early days of the organization, was no longer filled and expired. Otto Magnus von Stackelberg and Theodor Panofka were also founding members .

Initially, the institute's aim was to collect and publish all archaeological discoveries in the field of classical antiquity. The focus was on the Greek and Roman antiquities, but finds from Egypt and the Middle East should not be excluded. There were two forms of membership. On the one hand, the corresponding members ( socii ordinarii ), who should be organized as informers in a network spread across Europe. Sections in Italy, Germany, France and England served for this purpose. The Paris section in particular developed a lively activity in the first few years under the leadership of the Duc de Luynes . The second group were the ordinary members ( membri ). They were obliged to provide scientific contributions, but also to accept the publications.

When the institute's most important idea generator and conceptual designer, Eduard Gerhard, was appointed to the Royal Museum in Berlin in 1833 , the focus of the institute, at least the management, increasingly shifted there. At the same time, national interests increasingly prevailed and the organization increasingly lost its internationality. Nevertheless, great strides were made during this period. The first, albeit modest, institute building was erected in 1836 on the premises of the Prussian legation on the Capitol . The secretaries were paid from 1842, and finally in 1859 the Prussian Ministry of Education took over the total costs. The governing body, the Central Directorate, was initially made up of international members; since the revolutionary year of 1848 , only German members were represented. In 1871 the Institute for Archaeological Correspondence , as it was now called, was formally converted into a Prussian state institution. Three years later it was named the Imperial German Archaeological Institute .

The establishment of the Instituto di corrispondenza archeologica was one of the groundbreaking processes in the scientification of archeology. Regardless of the importance of the individual monuments, a start was made for the first time to collect and publish all archaeological finds, which made archaeological historical research possible in the first place. With the Bullettino degli Annali dell'Instituto di Corrispondenza Archeologica , the first archaeological periodicals were published and the possibility of continuous publication of the new findings was created. The creation of a large reference library that was open to all researchers was also new. This was the first time that a permanent research facility of this kind was created. There were also public lectures and adunances (discussions). All these actions made the Roman Institute one of the focal points of archaeological research in Europe and a model for many of the subsequent national institutes in the Mediterranean countries and in the Near East. The development from an international private law association in Rome to a Prussian-German institute was not the result of a targeted takeover by the Prussian state. It only reflects the political situation in Europe at the time. An international organization of this kind could not yet last due to the external circumstances. Nevertheless, the research continued to be internationally oriented.

The growing Reichsinstitut until the end of the Second World War

With the conversion into an imperial institute, a second branch office was opened with the Athens department in 1874 , which, like the Roman department, was supposed to record and publish the monuments, but whose focus from the beginning was also on archaeological field work, archaeological regional studies and topographical research . The Roman department took up such research only after the Second World War . It was the second such institution in Athens after the French institute, which was founded in 1846.

The establishment of the Roman-Germanic Commission (RGK) in 1902 was due to the changed scientific framework. Under the influence of historicism , the interest changed from the art-historical - philological orientation of archeology more and more to an empirical subject knowledge based on the results of field research. The aim was to create an organization that gave newer archaeological disciplines of prehistory and early history as well as provincial Roman archeology a roof. The RGK should become the focus of archaeological research in Germany, which until now was carried out by regional institutions for the preservation of monuments and antiquity associations on the one hand, and the Reich Limes Commission on the other. As in Italy, no excavations of its own were initially carried out, but the commission took part in ventures in, for example, Haltern and Trier .

For the 100th anniversary of the DAI, the organization continued to expand and took over existing structures. The Cairo department was established in Egypt and was based on several German predecessor organizations. When the Istanbul Department was founded, the DAI was able to fall back on the structures of the Berlin museums that had been active in Asia Minor since the late 19th century. The opening of a branch in Madrid had also been envisaged since 1929, but was only implemented on a modest scale in 1943. 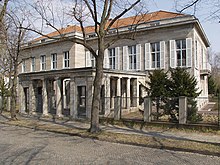 The Wiegand House in Berlin-Dahlem, seat of the President of the DAI

Kurt-Bittel-Haus, the new entrance area and the central library of the DAI at the headquarters in Berlin

In the headquarters of the DAI in the Podbielskiallee in Berlin-Dahlem , in the Wiegand house , are the offices of the President, the Secretary General as well as central services and service facilities.

At the head of the German Archaeological Institute is a president, since 2011 Friederike Fless has been a woman for the first time. At her side is the General Secretary, Philipp von Rummel since 2014 . He represents the President and primarily relieves her in matters of science organization and science policy. The president is bound by the requirements of the central management.

Franziska Lang is currently the President's representative in the chairmanship of the central management.

The members of the Board of Directors take part in the meetings in an advisory capacity.

Until a new statute came into force on January 1, 2005, classical archeology was even more important. It provided ten of the university professors, and each of the other departments sent a representative. In addition, the General Secretary of the Roman-Germanic Central Museum in Mainz was an ex officio member of the Central Management.

The Central Directorate is also responsible for awarding scholarships, apart from scholarships awarded by the commissions. The most important of these is the annual travel grant from the German Archaeological Institute , which has been awarded since 1859 . Members of the scholarship committee are Friederike Fless, Franziska Lang, Ortwin Dally, Christian Kunze, Johanna Fabricius and Jürgen Hammerstaedt.

The members of the select committee of the central management are Friederike Fless, Franziska Lang, Katja Sporn, Kaja Harter-Uibopuu, Jürgen Kunow and Christian Kunze. The project committee consists of Friederike Fless, Felix Pirson, Stephan Seidlmayer, Johanna Fabricius, Michael Heinzelmann, Jürgen Kunow and, until her death, Ulrike Wulf-Rheidt. The monument committee is the only committee headed not by the director, but by Thekla Schulz-Brize. Other members are Friederike Fless, Philipp von Rummel, Ulrike Wulf-Rheidt †, Friedrich Lüth , Steffen Laue , Klaus Nohlen , Andreas Schwarting , Axel Seemann and Josef Steiner . It is therefore the only one of the committees that is largely made up of people who are not members of the central discussion.

The Board of Directors consists of the President, the Secretary General and the Directors of the seven departments and the three commissions. The task of the directorate is laid down in the statutes.

The departments for cultural property protection and site management as well as for technology development are subordinate to a joint special representative.

A list of the publications (journals, series, monographs) of the DAI can be found on the Internet.

The DAI publishes some of the most important German specialist journals for archeology: (in brackets the common abbreviations according to the DAI guidelines)

The German Evangelical Institute for Classical Studies of the Holy Land in Jerusalem is also the research center of the German Archaeological Institute. It is led by Dieter Vieweger , the executive director for Jerusalem and Amman , who also heads the sub-institute in Jerusalem. The branch in Amman is headed by Jutta Häser .

Departments, commissions and central units of the German Archaeological Institute