Divided into several departments, the institute works in the area of ​​the Old World and its contact zones from the Paleolithic to the Middle Ages. In addition, it maintains a permanent exhibition and, through its numerous publications and events, is aimed at communicating the latest research results to a broad public.

East wing of the Electoral Palace in Mainz, location of the exhibition rooms of the Roman-Germanic Central Museum

In the first few years after it was founded, the museum was confronted with financial difficulties because at the beginning there was no regular financial support from the sovereign. Only small sums of money were made available to the museum by the state government, princes, kings and later also the emperor. At that time, the voluntary contributions from citizens of Mainz and sales of copies were very important. In 1855 the Nuremberg Museum made an initial offer to merge the Mainz and Nuremberg locations. Lindenschmit rejected this and another offer in 1866/67 on the grounds that he feared that the department of the Roman-Germanic Central Museum would be neglected. It was not until 1872, after the founding of the empire, that the RGZM received an annual grant. Ludwig Lindenschmit the Elder Ä. shaped the character of the museum as a scientific collection of copies for the study of classical antiquity and prehistory in Germany, including mainly ancient objects from the Germanic and Roman periods.

After the death of Ludwig Lindenschmit the Elder Ä. In 1893 Karl Schumacher became the new 1st director of the RGZM in 1900, Lindenschmit's son, Ludwig Lindenschmit the Elder. J. , received the post of 2nd director. In the following years, the collection was expanded again and again through new casts and the acquisition of originals. The available rooms were also extended by 22 newly furnished rooms in 1910. Later came armory (Sautanzgebäude) and magazine (1930) and the Schirrmacherei as a workshop (1934) to the buildings of the RGZM it. During the Second World War, large parts of the exhibition halls as well as the armory and the workshop were destroyed and the castle was occupied, initially by Americans and later by French. In 1952 the "Society of Friends of the Roman-Germanic Central Museum" was founded. 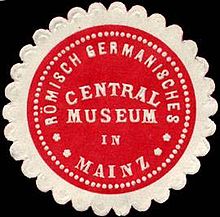 The previous presentation in Mainz continues the character of a study collection, which is aimed more at experts and laypeople interested in the subject than at a broad public. The museum, which has been financed by the federal and state governments since 1977 and has belonged to the Leibniz Association of German Research Institutions since 2002, offers not only science education programs but also special exhibitions on current research. At times, the RGZM also took on the task of preserving monuments for Rheinhessen and carried out excavations. The museum's restoration workshops form a basis for his scientific work. There are also numerous research projects in the various research areas.

At the beginning of December 2007, it was decided to build a new building on the southern edge of downtown Mainz, next to the Museum of Ancient Shipping . His archaeological center is being built there. In June 2017, the permanent exhibition in the Electoral Palace was closed to the public as part of the preparations for the move. There are also opportunities to visit special events and the Museum of Ancient Shipping.

The RGZM researches the archeology of the ancient world. Time-limited research fields were created across departments and across time, in which scientists from the various departments work together on questions of cultural history. These are the following research fields:

Research topics that have already been completed are:

In addition to this research with focal points, other topics are researched in the RGZM:

The unique in-house knowledge base of the RGZM combines extensive technical infrastructures with a wide range of technical and personnel-based scientific expertise, which is spread across ten areas of competence of the company. Within these closely interlinked areas, basic projects and exploratory research contribute to expanding the knowledge base. They serve to open up important material sources or to develop and test new methods to a degree that subsequent projects with more extensive research questions can build on them.

One focus of the work of the RGZM is the processing of found objects. This happens in the major restoration workshops. Among other things, the equipment of the glacier corpse “ Ötzi ” or the brass boar from Soulac-sur-Mer were examined and processed. The workshops are divided into the areas of restoration / conservation, documentation and archaeometry . With over 30 employees, these are among the largest institutions of this type in the world and enjoy an international reputation. There is close cooperation between restorers, natural scientists and archaeologists, as well as cooperation with the archaeological and geoscientific faculty of the University of Mainz and the Institute for Spatial Information and Measurement Technology at the University of Mainz. The workshops are divided into:

For the investigation of the chemical composition of inorganic materials:

The selection of objects is primarily based on scientific interest. Finds of cultural and historical significance, which require particularly difficult restoration / conservation using special processes and a highly developed logic, are also of great interest. The most extraordinary and important finds are faithfully reproduced for the collection of the house. Another task of the workshops is the development of new, modern restoration, conservation and reproduction processes.

Since the 2007/2008 winter semester, the RGZM and Johannes Gutenberg University Mainz have been offering a dual BA degree in Archaeological Restoration .

For decades, winter lectures have provided insight into current research. Specialized lectures from the Byzantium series in Mainz are integrated into this lecture program .

At the RGZM, the Samian Navigator , an online find database on Terra Sigillata , was created in cooperation with the universities of Reading and Leeds . Today around a quarter of a million entries can be linked and examined.

The museum is financially and ideally supported by the Society of Friends of the Roman-Germanic Central Museum in Mainz e. V. supports and conducts an extensive lecture and guided tour program as well as excursions.

Publisher of the RGZM

The RGZM publishing house publishes scientific journals and monograph series on archeology. In addition, exhibition catalogs and popular science books inform a broad audience about new research results in archeology. The publication program currently comprises three journals and eight series of monographs, most of which are - often in foreign languages ​​- scientific publications for international experts. However, some of the publications are also aimed at a wider audience.