Xi'an ( Chinese  西安 , Pinyin Xī'ān , W.-G. Hsi-An  - "Western peace", IPA [ -ɕi-an ], obsolete after Post Sian ), historically also: Xi'an Fu ( 西安 府 , Xī'ān Fǔ  - "Official seat of Xī'ān Prefecture", obsolete after Post Sianfu ), is the capital of the Chinese province of Shaanxi and one of the 15 sub-provincial cities of China. Xi'an has an almost completely preserved city ​​wall and was the starting point of the Silk Road . The city is the seat of the University of Northwest China and the starting point for visits to the Terracotta Army .

At the county level, Xi'an is made up of eleven boroughs and two counties:

Under the Qin Dynasty, Xi'an was the first capital of the Chinese Empire and, over the course of 1120 years, it was the capital of an imperial family, mostly under the name Chang'an („=" Long Peace "). The Chang'an of the Han period was about 5 kilometers northwest of today's Xi'an and had a population of about 240,000 at the turn of the century. In 18 AD, the city was devastated in connection with the Red Eyebrow Riot , after which the capital was moved to Luoyang . In 582 a new capital named Daxing was built under a Sui emperor southeast of the Han city, in the area of ​​today's Xi'an - at that time and during the following Tang dynasty (618 to 907) in area (88 square kilometers) and with about one Million inhabitants otherwise the largest city in the world. Under the Tang it got the name of the old Han metropolis back: Chang'an. The city was named Xi'an in 1369 from the first Ming emperor Hongwu , who also wanted to move his capital here, but ultimately decided in favor of Nanjing . Xi'an became world famous with the archaeological excavations in 1974 when over 8,000 life-size terracotta soldiers were discovered in battle formation. The tomb of the emperor Qin Shihuangdi (221 BC to 209 BC) (literally: first emperor of the Qin, more precisely the first of the sublime, deified ancestors), who was the first to unite China as a country and who founded the Qin dynasty , is one of the most visited tourist attractions in China.

Xi'an was already a city of over a million people in the 7th century and did not reach this population again until the second half of the 20th century. Due to China's urbanization, the city's agglomeration has grown rapidly and is now one of the largest in the country. A population of over 10 million is expected in the metropolitan area by 2035.

The tomb of Emperor Qin Shihuangdi , discovered by farm workers near Xi'an in 1974, is one of the most important archaeological finds of the twentieth century. At the age of 13 (246 BC), shortly after his accession to the throne, the emperor had the construction of his tomb begin. During the 36 years of construction, up to 700,000 workers were busy at the same time. A burial chamber, protected by an army of life-size clay soldiers, the clay soldiers army (terracotta army), was built on an area of ​​several thousand square meters.

During the reign of Qin Shihuangdi, the previously independent Chinese feudal states were united into one great empire for the first time. The driving force behind this political and military feat was the emperor's chancellor, Li Si , one of the most capable statesmen in Chinese history. Further achievements of this first emperor of the Chinese empire were the expansion of the Great Wall, the construction of highways and canals as well as the use of uniform writing and currency. At the age of 49, Qin Shihuangdi died while on an inspection tour to the province and was buried in his burial chamber.

The second son of the Qin Shihuangdi, Qin Er Shi , who assumed rule, was nowhere near as capable as his father. Riots broke out just three years after the emperor's death, and the rebel general Xiang Yu devastated the tomb (207 BC). The shafts with the clay soldiers were broken into and a large part of the weapons stolen. The wooden walls that enclosed the soldiers were burned and many figures were destroyed. 206 BC Qin Er Shi was killed and the end of the Qin dynasty was sealed.

Unlike the tomb of Qin Shihuangdi, the clay soldiers were not mentioned in any of the contemporary or later records. Their discovery was therefore a sensation even for experts. So far, more than 3,000 soldiers and horses as well as more than 40,000 weapons have been excavated and restored, an estimated 5,000 figures are still hidden in the ground. 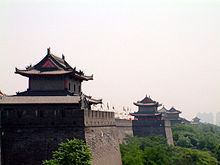 Xi'an's city walls were built between 1374 and 1378 and renovated in the 1980s. It is the largest largely preserved city ​​wall in China. With a total length of 13.74 km, it encloses downtown Xi'an. In terms of structure, it is a walled earth wall. Its width is 18 m at the base and 12 m at the crown . Its height is 12 m. Four gates (north gate, west gate, south gate and east gate) used to give access to the city protected by drawbridges . These drawbridges were lowered in the morning by a signal from the bell tower and pulled up again in the evening by a signal from the drum tower .

Additional openings have now been created for car traffic. A section of the wall near the train station that was torn down earlier was bridged so that a complete tour of the city wall is possible.

The Great Wild Goose Pagoda was originally a temple from the Sui Dynasty , which was expanded in 647 by Emperor Gaozong ( Tang Dynasty ) in honor of his mother. The monk Xuanzang (玄奘) lived in this temple ; he had traveled through India for 17 years and got to know Buddhism there. He translated the Buddhist scriptures that he had brought back from this trip in this temple.

The story is recorded in artistic form in the novel The Journey to the West (西游记 - Xī Yóu Jì ) from the Ming Dynasty (mid-16th century) by Wu Cheng'en (吴承恩), whom every child in China knows and knows which was filmed several times. In memory of the monk Xuanzang, there is a large bronze sculpture behind the pagoda.

The Big Wild Goose Pagoda has seven floors. Inside there is a wooden staircase on which one can get to the seven floors and (when the air is clear) enjoys a good view.
The name wild goose pagoda goes back to an Indian legend: “There was once a Hinayana Buddhist monastery in which monks were also allowed to eat meat. One day the supplies of meat ran out and one of the monks called; 'We have run out of meat and Buddha should know that'. At that moment a goose fell dead from the sky from a flock of wild geese that were flying over the monastery. The frightened monks - believing that Buddha had sacrificed himself - built a pagoda for the goose ”.

The current building was erected in the middle of the 18th century, although there are said to have been mosques in the same place earlier. The building is adapted to the Chinese architectural style and is surrounded by gardens. The mosque of Xi'an is one of the largest mosques in China. The forecourt is open to the public, the prayer rooms are reserved for Muslims.

The drum tower dates from the 14th century. In earlier times, when the city wall was closed at night, the drums raised the drawbridges at the four gates in the evening. Today the tower is used for exhibitions. 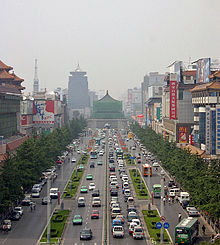 Wangji Temple, a small temple, whose history in the Tang Dynasty goes back

The bell tower is located at the intersection of the two streets that run from the north to the south gate and from the east to the west gate. In earlier times, when the city wall was closed at night, the striking of these bells in the morning caused the drawbridges to be lowered at the four gates. The square pavilion is enthroned on a 9 m high base and is now used for concerts. The bell is new.

The Small Wild Goose Pagoda is very similar to the Big Wild Goose Pagoda. However, with a height of 43 m, it is 21 m lower, but still has a total of 13 floors, i.e. six floors more. For this reason, the individual floors are extremely low and the ascent is very narrow.

The Xingjiao Temple is located at the foot of the Shaoling Plateau, 20 km south of Xi'an. It is famous as the tomb of Xuanzang . The emperor Tang Suzong left a calligraphy with two characters on the stupa , which mean something like "Blossoming Teaching" (Xingjiao). The temple was named after them.

The stele of Xi'an (in the stele forest of Xi'an)

Also known as the Xi'an Monument, the stele with inscriptions is one of the oldest evidence of Christian mission (Nestorianism) in China.

The museum is one of the most important archaeological museums in China. Jade works of art from the 3rd millennium BC are on display. BC, relief bricks from the palace of the First Emperor , a 2000 year old iron gear , old paper and porcelain as well as wall paintings from the Tang period.

The Neolithic village of Banpo

The museum has been open again since the beginning of 2007.

Not to be compared with the bar and pub streets of Beijing and Shanghai , there is also a street in Xi'an with pubs, bars, teahouses and cafes. The so-called Coffee Bar Street is parallel to Nan Da Jie (main street in Xi'an) and offers the kind of entertainment that every pleasure seeker desires. There are also a few discos and bars (some with live music) in the city center near the bell tower.

The city wall and many buildings and parks are brightly lit in the evening. At the big wild goose pagoda there are big, musically accompanied water games every evening.

In addition to the tourism industry, the economy of the city of Xi'an is mainly divided into the two industrial areas Xi'an Economic & Technological Development Zone and the Xi'an Hi-tech Industries Development Zone . Telecommunications companies such as the local Datang Telecom and Huawei as well as the foreign companies CTE , CATT , NEC , Fujitsu and Siemens are based here . Numerous software developers, personnel service providers and outsourcing companies are also located here. Since November 2006, the city has also been important for the aviation industry when the city council in agreement with the China Aerospace Science and Technology Corporation decided on a joint venture and established the Xi'an Aerospace Science and Technology Industrial Base . Another economic area of ​​the city is the automotive industry, which is dominated by the Shaanxi corporation .

In a ranking of cities according to their quality of life, Xi'an ranked 145th out of 231 cities worldwide in 2018. Compared to other Chinese cities, it was behind Shanghai (103rd place), Beijing and Guangzhou (both 109th place), Shenzhen (130th place), Chengdu (133rd place) but still ahead of Chongqing (147th place) and Shenyang (157th place).

Xi'an is a railroad hub. In addition to some lines of conventional rail traffic that approach the main station, there are currently (2018) high-speed lines in four directions that use a new station on the outskirts:

The construction of the Xi'an – Yan'an railway line has been approved. It should go into operation in 2023.

The first line of the Xi'an subway opened on September 16, 2011, and the network has been continuously expanded since then. It is planned to expand the route network in the long term to a total length of 986 kilometers, so that the subway will cover 60 percent of Xi'an's local public transport.

Xi'an has twinned cities with the following cities: