Han Dynasty Territory and Foreign Relations at the New Age 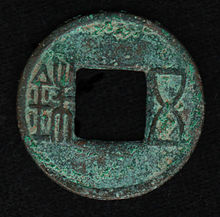 The fall of the previous Qin dynasty happened through several simultaneous peasant revolts that were directed against the merciless oppression. The occasion was the order to execute a group of 900 workers who were late for work on the Great Wall due to heavy rainfall. Those affected rose and assembled within a few days to form an army of allegedly 300,000 men.

Low officer Liu Bang prevailed among the leaders of the uprising . His opponent on the imperial side was the nobleman Xiang Yu from Chu (232–202 BC), against whom he had been fighting since 206 BC. Carefully and ultimately successfully fought. When Xiang Yu fell, Liu Bang became emperor. He allowed the Qin Dynasty's administrative apparatus to continue and adhered to the majority of its laws and ordinances, including the ban on books.

The population was classified into 24 ranks (jue) . One could be promoted for special achievements (war, tax, bribery), but also be demoted as a punishment. The benefits to the state consisted of poll tax, forced labor and military service. Population resettlements took place in order to defend the border, reclaim land and relieve the conurbations.

As before, the administrative apparatus was divided into three parts: civil affairs, military affairs and inspection / control. This affected both the capital Chang'an , the province (where a distinction was made between jun and prefectures xian ) and the fiefs, which were initially left to the imperial family and deserving generals.

At the time of Qin and Han Dynasty in Imperial China the power of vassals, d. H. of the nobility eliminated and the feudal system abolished. The empire was finally centralized, divided into provinces and administered by a bureaucratic apparatus. An opposing revolt of the Seven Kingdoms, i. H. old feudal bearer, became 154 BC Smashed.

In addition, there was the defense of the danger by the Xiongnu under Emperor Wu (e.g. in 119 BC, a loss-making and victorious campaign to the Orkhon in Mongolia ). Furthermore, China expanded southward through the subjugation of the Yue ethnic groups or kingdoms (111 BC conquest of Canton ) or the Dian (in Yunnan), which also increased the population. The course of Han policy at the time was clearly aimed at expansion.

The Han dynasty also experienced a cultural and economic boom. The teachings of Confucius were recognized by the state, even if Daoism initially dominated. Buddhism , which originated in India , also found its way into China. Around 65 BC They tried to restore the 213 BC with considerable partial success. Burned and lost literature. The Chinese garden culture developed considerably further.

The economy experienced an upswing, recognizable by the exploding silk , lacquer and jade trade and a multitude of inventions: steel production , ship's rudder (2nd century), hand crank, vernier caliper (bronze model from the year 9), wheelbarrow , chain pump (earliest mention in Chinese Philosopher Wang Chong around the year 80), suspension bridge , drilling according to Sole (grave relief 1st century), rotary winnowing machine , seed drill , paper(oldest find from the time of Emperor Wu), seismoscope a . a. However, many of the inventions mentioned were already known to the ancient Greeks and Romans, so that these are parallel Chinese inventions, which does not detract from the achievement of the Hanseatic inventiveness.

The important industries iron and salt were state monopolies for a good century (since 117 BC). But there were also private companies run by wealthy merchant families, B. in the equally important field of silk production. The Chinese officials also tried to enlarge the arable land, to cultivate it more intensively and to persuade the nomadic tribes on the borders to cultivate arable land .

The growing economic strength of Han China and its politico-military expansion favored trade between the Chinese countries and various regions of Asia. Specifically, Han China spread along the Silk Road as part of the war with the Xiongnu and their vassals (102/101 BC and 73-94, the latter under General Ban Chao ) . This was followed by the settlement of Chinese soldiers (who were farmers here in so-called tuntian military colonies ) and a stream of middlemen in this region. The loyalty of the defeated nomads was bought with extensive gifts that made up over 1/6 of the Chinese state budget.

A similar expansion took place in the subtropical areas, where the connection to the Indo-Iranian sea trade was created via the canton and North Vietnam. Han China first came into contact with Persia and (indirectly) even with the Roman Empire . Thus, according to Chinese reports, envoys from the Romans (country " Daqin ") first appeared in China at the time of Marc Aurel (166, then 226, 284). Indian embassies reached court between 89 and 105, and official relations with Java were mentioned for 132 .

Intermediate period of the Xin Dynasty

Because of their economic successes, wealthy provincial families became increasingly influential over time, especially when they were able to combine agriculture with industrial enterprise and trade. For example, a family named Zhuo in Chengdu employed B. 800 craft slaves (iron, paint, textiles), operated salt trade and owned huge estates.

This economic success led to the expropriation of the small peasants through loans and usury, which also explains the high number of slaves (including convicts and insolvent debtors). Merchants openly displayed their wealth so that there were bans at times. When that didn't help, taxes were levied on ships and wagons and state monopolies were introduced . Nevertheless, the social balance got mixed up, which discharged during the reign of Wang Mang (9-23) in the civil war.

The fall of the Early Han Dynasty came from the Wang family; H. that of an empress. Her nephew Wang Mang usurped the government with her permission and in the year 9 finally proclaimed himself emperor. He was overthrown by the simultaneous peasant revolt of the " Red Eyebrows " and three Han princes 23. Of the Han princes, Liu Xiu (Emperor Guang Wu) ascended the throne in several battles 25 and established the Eastern (Late) Han Dynasty.

The accession of the Late Han to the throne did not resolve the accumulated problems; it only postponed them. In principle, it was the large landowners who supported the late Han emperors, while the early Han still used the small farmers as a counterweight to the fiefs and wealthy families.

At the time of the Late Han there were increasing population shifts from the north to the Red Basin in Sichuan and the Yangtze River . The reason was the unrest among the former nomads (South Xiongnu, Proto-Tibetans). By 107 a general withdrawal from the northwest was being considered. The uprooted peasants and former military settlers were looking for land, increased the workforce in the south and became dependent on the wealthy landowners, who amassed huge fortunes and set up their own militias.

The decline of the powerful Han Empire was initiated by various developments. At the imperial court, brutal power struggles often broke out between various groups struggling for influence, with the last Han emperors increasingly becoming puppets of the court, who lost control of the central administration and the army. This was promoted by another development: the steadily growing influence of very rich and powerful large landowning families, who gained more and more power locally, which was also at the expense of the imperial central government. In the provinces, their patronage was often more important for military leaders than a connection to the distant imperial court. Most recently, there were unrest in the country that could no longer be controlled.

The final fall of the late Han dynasty in the reign of Emperor Ling (168–189) was initially accompanied by unrest and banditry. Then the religious and social peasant uprising of the Yellow Turban broke out among the Zhang brothers in 184 , which soon spread to the whole empire. In order to master the situation, the emperor gave the provincial governors and generals far-reaching powers, thereby liquidating the influence of the central government. This was joined by the social-religious movement of the Five Rice Sheffels of Zhang Daoling and his grandson Zhang Lu , which became an independent territory around Hanzhong from 190controlled. After Emperor Ling's death, a dispute over the succession broke out in the capital, in which General Dong Zhuo prevailed. He ruled the last Han emperor, Xian , until he fell victim to a conspiracy and was murdered.

At that time the country was in a civil war. In 196 the general Cao Cao seized the person of the emperor and tried to reunite the empire. However, he failed in the Battle of Chibi (winter 208) and had to accept the Yangtze River as the southern limit of his sphere of influence. Subsequently, the empires of the warlords Liu Bei and Sun Quan formed south of the Yangtze River . Cao Cao died in the spring of 220, and his son Cao Pi , who initially ruled for the emperor, deposed him that same year and proclaimed himself emperor of the Wei Dynasty . This marked the beginning of the Three Kingdoms Period in China . 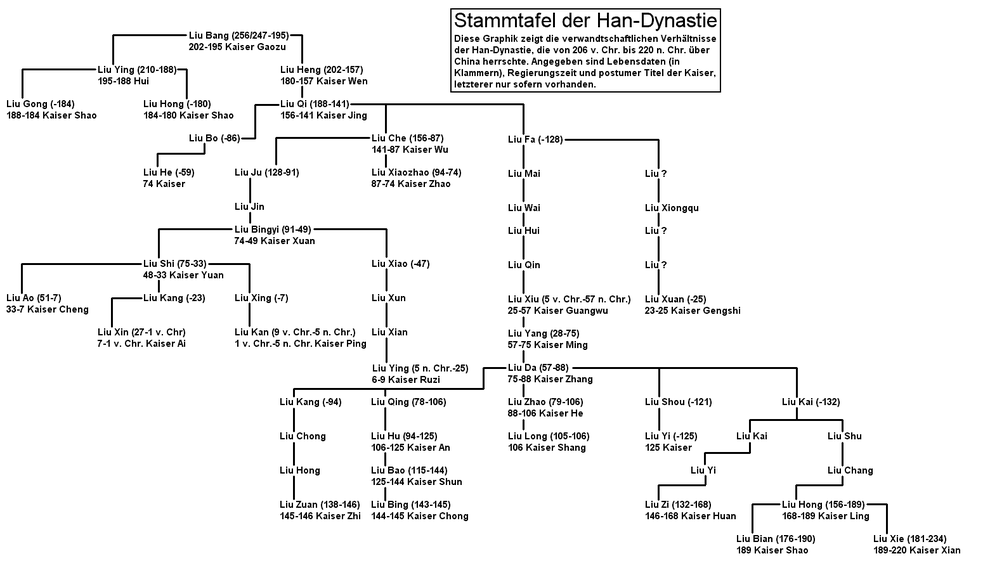 Family tree of the Han dynasty

The emperors of the Han Dynasty claimed to be rulers of Tianxia , i.e. the entire world known at the time. This Tianxia, ​​however, is to be seen as a political, not a geographical dimension: the Chinese were very well aware at the time that there were other empires, and geographically they saw China as a small part of the world. In terms of foreign policy, the conflict with the inner-Asian steppe peoples continued as a dominant problem throughout the Han dynasty; the empires to the south and east played a subordinate role for the Han emperors.

In 209 BC The Chanyu Mao-tun succeeded in uniting the Xiongnu and organizing them better politically. He founded a capital in Outer Mongolia and enlarged the territory ruled by the Xiongnu considerably, including recapturing the Ordos Plateau at the transition from Qin to Han during the war . The Xiongnu represented a great danger because of their frequent attacks in the Han border area, but also because of the danger of deserters from Han to the Xiongnu. Emperor Gaozu took the defection of the king from Han in the year 200 BC. As an occasion to go into battle against the Xiongnu. With 300,000 men he succeeded in taking the Xiongnu as far as Pingchengto push back in the north of today's Shanxi . However, there they were surrounded by the Xiongnu cavalry and the emperor barely escaped with his life.

The result of this devastating defeat was the Heqin devised by Liu Jing-Politics. It provided that a Han princess would be given to the Chanyu of the Xiongnu as a wife, that Han would regularly send "gifts" to the Xiongnu and that the Chanyu and the Han emperor would recognize each other as rulers of fraternal states with equal status. In 198 BC BC the first (alleged) princess was brought to the Chanyu, with which the treaty came into force. However, this policy of marriage alliances was very expensive for China and did not achieve its goals. The “gifts” due to the Xiongnu became more and more extensive and the Xiongnu, spurred on by their rapid territorial expansion, became more and more bold: After the death of Emperor Gaozu, the Chanyu even asked his widow to be married. The border areas were regularly plundered by the Xiongnu despite the peace treaty,

A more active policy towards the Xiongnu could only be pursued when the empire was financially and militarily consolidated under Emperor Wudi. An ambush aimed at getting hold of the Chanyu struck in 134 BC. Chr. Fails. 127 BC General Wei Qing succeeded in retaking the Ordos region in 121 and 119 BC. BC, under Huo Qubing and Wei Qing, massive cavalry contests against the Xiongnu and managed to displace the Xiongnu towards the north. As a result, the Gansu Corridor became part of the Han Empire and four new command posts were established: Jiuquan , Zhangyi , Dunhuang and Wuwei. Due to a chronic shortage of horses, further blows against the Xiongnu could not be carried out. 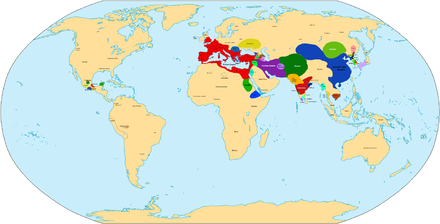