The title of this article is ambiguous. Further meanings are listed under Chang'an (disambiguation) .

Chang'an ( Chinese  長安  /  长安 , Pinyin Cháng'ān ? / I , W.-G. Ch'ang-an ) was a city in ancient China. It was originally located five kilometers northwest of present-day Xi'an , but has been relocated and re-established several times. Chang'an served as the capital of the Western Han Dynasty as well as the Xin , Sui and Tang Dynasties . Its name was eventually changed to Xi'an under the Ming Dynasty . 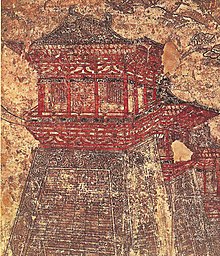 City gate of Tang-era Chang'an, painting from the tomb of Prince Li Chongrun

Chang'an was first mentioned during the spring and autumn annals (722–481 BC) and had been around the year 650 BC. A population of over 33,000. The first historical emperor of the united China, Qin Shihuangdi († 210 BC), built his mausoleum near the city, which was discovered in 1974 with the famous Terracotta Army. Xianyang , the capital of the Qin, was also not far from today's Xi'an.

Chang'an, which served as the capital of the Western Han Dynasty (206 BC to 9 AD), was a cosmopolitan city by the time scale. During the reign of the first Han emperor Gaozu, the city ​​had around 120,000 inhabitants. The construction of the imperial capital Chang'an is divided into three periods, which together lasted more than 90 years. Emperor Gaozu had the imperial palace built outside the city. In 202 BC He had the Xingle Palace ( 兴 乐 宫 ) of the Qin Dynasty renovated and renamed it Changle Palace ( 长乐宫 ). In the year 200 the emperor built the Eternal Palace ( 未央宫 ), seven kilometers northeast of today's Xi'an , in which the government resided from then on. After the death of Emperor Gaozu (195 BC), his successor Hui built the city fortifications of Chang'an, which were completed in September 191 and covered an area of ​​36 km². He and his later successor Emperor Wu gave the city many more palace buildings. In the 1st century BC In the end, Chang'an reached around 250,000 residents.

After the embassy of the imperial official Zhang Qian , during which he toured Central and Western Asia, Chang'an became China's “gateway to the world” as the port of call for the newly emerging Silk Road . However, with the decline of the Han Dynasty, the city's prosperity also ended. By the year 2 AD, when the empire was already fully controlled by the official Wang Mang (who founded the short-lived Xin dynasty in 9 AD ), the population had already fallen sharply. Their destruction in the civil war (until 23 AD) sealed their fate. It was chosen as the capital by Emperor Gengshi , but after his death (25 AD) his successor Guangwu decided to make the prosperous Luoyang the capital. His dynasty is therefore called the Eastern Han Dynasty . Chang'an, which was now called the Western Capital , sank into insignificance and by the year 100 only had 81,000 inhabitants.

In the civil war after the collapse of the Eastern Han Dynasty (184-220), the usurper Dong Zhuo decided to move the government from Luoyang to Chang'an, as the city was easier to defend in the shadow of the mountains. After his death (192) and the demise of his successors (195), the young emperor Xian left the city and set out for the completely destroyed Luoyang, where he was welcomed and received by the warlord Cao Cao .

Chang'an became the capital again under the Sui Dynasty . Emperor Wen chose a site south of Chang'an as the location for his new palace, which he named Daxing , in AD 582 . In 589 he united China, which had been divided since 313. Chang'an had 95,000 residents at that time.

The Sui dynasty was followed by the Tang dynasty in 618 and took over the capital of its predecessors. With 1,000,000 inhabitants in the 8th century, the city was the largest in the world at that time. Its layout was the model for the capitals of Japan in antiquity ( Fujiwara-kyō , Heijō-kyō , Heian-kyō ) and Gyeongju in Silla (Korea). The city's Ximing Temple was a focal point for pilgrims from all over the world. Here Indian pilgrims translated their sutras into Chinese. The Japanese founder of Shingon Buddhism Kūkai stayed here around 805 and studied Sanskrit . After the Battle of the Talas in 751, in which the Abbasids were able to weaken the Chinese influence in Central Asia, Arab traders came to the city.

End of the 8th century - beginning with the An Lushan Rebellion, Chang'an was occupied and destroyed by rebels several times. In the year 900 Chang'an had only 500,000 inhabitants. After the Tang Dynasty, the former imperial capital fell into insignificance. Under the Ming Dynasty , the provincial city of Chang'an, whose area within the mighty city walls was only 12 km², was renamed Xi'an .

The site of the Hanse capital Chang'an and the site of the Daxing Palace of the Sui dynasty in the Tang period Chang'an are on the list of monuments of the People's Republic of China .

To the east of Chang'an City belongs the Daming Palace , which for a long time represented Tang power and culture with splendor, size and sophistication; also the Taiji Palace in the west and the Xingqing Palace in the south.