The Sui dynasty ( Chinese  隋朝 , Pinyin Suícháo , 581 - 618 ) was one of the great dynasties of the Chinese Empire despite its short life , as the country was under their rule after a long period of fragmentation of the central power since the fall of the Han dynasty in Year 220 was reunified for the first time. 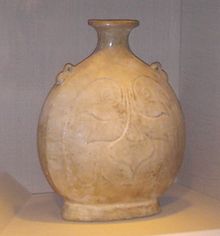 General Yang Jian , the founder of the dynasty, was a successful man who overthrew the Northern Qi Dynasty on behalf of the Zhou in 577/78 . When the last emperor of the Northern Zhou dynasty (a sick despot) died in 580, Yang Jian eliminated all heirs and took power himself in 581 as emperor with the title Wendi . With that the Sui dynasty was founded.

This was made possible by the passivity of the Kök Turks , the patrons and opponents of the detached dynasties, whose state was to split into two parts after the death of Khan Taspar in 581, something Wendi's diplomacy played a certain part in. In 585 even the new Turkenkhan Sha-po-lo / Isbara (r. 581-587) confessed himself as a vassal of China.

Finally, Emperor Wendi also conquered Jiankang (today Nanjing ) in 589 and eliminated the Chen dynasty there , with which China was reunited after more than 200 years of division. The consequences of this split were, however, only slowly overcome, because the mutual contempt of the North and South Chinese was great (“uncivilized” North Chinese versus “decadent” South Chinese), and the way of life differed significantly in the meantime, if only in matters of marriage. Emperor Wendi accelerated the "rapprochement" of north and south in his own way by destroying Jiankang and plowing the ground. His successor Yangdi, on the other hand, stayed in the south for years, avoided the aristocracy of the north-west in favor of scholars and poets when he held court in Luoyang, and had Yangzhou expanded into the future capital. This deprived him of the support of the Sinised Turkish nobility and promoted his overthrow.

With the Sui began a strong population growth in China. The Sui dynasty began with numerous reform projects , which achieved great things in a short time, but placed heavy demands on the country in terms of taxation and public works and thus brought the dynasty to fall prematurely. There are to be mentioned:

Under Emperor Yangdi, however, there were three badly waged wars against the North Korean-Manchurian Goguryeo (612–614) and a setback against the eastern Kök Turks in 615 , which shook the dynasty's reputation. To make matters worse, these wars had been fought during flood-induced famine, causing the peasants to rise from 610 onwards. In this difficult situation, the Emperor Yangdi retired on a pleasure trip to the south, leaving the north alone. A general named Li Yuan (with the approval of the Turk Khan Shibi) rose promptly in 617 , conquered the capital Chang'an and founded the Tang dynasty . Yangdi was strangled by his counselors in Jiangdu on the grounds that "Heaven has rejected the Sui, let us take care of ourselves!"