North China ( Chinese  中國 北方  /  中国 北方 , Pinyin Zhōngguó Bĕifāng ) and South China ( 中國 南方  /  中国 南方 , Zhōngguó Nánfāng ) are names for the two halves of the " real China ". They differ geographically, but also linguistically, ethnically, religiously and culturally as a result of different historical developments. The demarcation is not clearly defined; the Qin Ling Mountains and the Huai He or the Yangtze are mentioned .

Northern China mainly includes the valley of the "Yellow River" Huang He , the old capitals Chang'an , Luoyang , Kaifeng and finally Beijing . In a broader sense, it also includes the areas beyond the Great Wall : Inner Mongolia and Manchuria . This northern half of the country ( 中國 北方  /  中国 北方 , Zhōngguó bĕifāng ) must not be confused with the Huáběi region ( 華北  /  华北  - "Northern China"), which only covers part of this area.

South China ( 中國 南方  /  中国 南方 , Zhōngguó Nánfāng ), on the other hand, stretches from the metropolises of Nanjing and Shanghai (both on the Yangtze) to Guangdong , Hainan and Hong Kong . In a broader sense, this also includes the island of Taiwan and the South China Sea claimed by China .

In terms of climate, China is mainly divided by the Qinling Mountains. The northern area is generally drier and cooler. While the north of China, especially beyond the wall , consists more of steppe , taiga and desert ( Gobi and Tarim ) and is therefore less populated, the heavily populated south of the country, especially in the extreme south, is dominated by a mountainous and hilly landscape with almost subtropical vegetation. Northern China has a larger share of China's arable land . While the north is very fertile due to blown loess , the Qinling Mountains prevented the deposition of loess soil in the south - with the exception of the fertile mountains in the Red Basin . The cold north is influenced by dry Siberian snowstorms, the warm south by Pacific monsoons . In the area of ​​the south coast of China the climate is already tropical, in Southeast Asia the climate is finally completely dominated by monsoons.

North and South China may have been settled from different directions, with the South coming from India first. In terms of development history, before the emergence of a high Chinese civilization, nomads raised horses and pigs dominated in the north, while farmers with cattle and water buffaloes in the south dominated. The farmers in the north tended to grow wheat and millet, while those in the south tended to grow rice.

The northern neighbors of the Chinese, the Manchurians, Mongols, Uighurs and Turkic peoples remained nomads and still dominate closed minority areas in northern China. In the south, on the other hand, the Chinese sprawled the areas of the agricultural minorities Miao , Yao , Zhuang , Yi , Dong , Bai , Hani , Naxi , Tujia and others, which still exist today. While the Chinese in the north were repeatedly subjugated by Turkic Mongolian minorities, the Chinese in the south subjugated numerous minority peoples. The northern minorities were more influenced by North and East Asia, the southern minorities were more Southeast Asian and Ind (ochines), see peoples of China 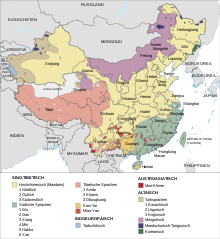 The North Chinese dialects are relatively similar, so they can be referred to as one language (" Mandarin "). They form the basis for standard Chinese , which is the official language of all of China (and Taiwan).

Different Chinese languages ​​are spoken in the south of China: Gan , Hakka , Min , Wu , Xiang and Yue (Cantonese) . In the south-west ( Sichuan , Yunnan ), which experienced massive immigration from the north during the Ming and Qing dynasties , dialects of Mandarin are spoken today. Then there are the non-Chinese minority languages.

To communicate across language borders, the Chinese now use standard Chinese or fall back on the common written language.

Northern Chinese cuisine is more likely to use wheat, especially noodles; the south chinese rather rice. Due to past famines, many food sources are used in the south. A northern Chinese proverb derides that the southern kitchen "prepares anything that has feet or wings - except tables and airplanes".

Among the religions in the People's Republic of China , the proportion of Buddhists , Daoists and Confucians is roughly the same throughout the country, but communists continue to dominate in the north . It was from here that Maoism began to seize power, while the formerly nationalist South is still more market-oriented and pro-Western today. Most of the former contract or lease ports and all of China's special economic zones are located in southern China. 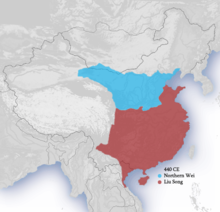 The first Chinese empires emerged in the north. It was not until the beginning of the Chinese Empire ( Qin dynasty , 221–207 BC and Han dynasty 206 BC – 220 AD) that the south was incorporated into the empire and sinized. In the course of its two thousand year history , the empire was divided several times, with northern and southern empires or dynasties almost always facing each other:

With the conquest by the Mongols ( Yuan Dynasty , 1279–1368), the empire was permanently reunited. The capital was Dadu ( Beijing ) in the north. With the Ming Dynasty , Nanjing ("Southern Capital") in the south became the capital, then Beijing (Beijing, "Northern Capital") again . The Manchurian Qing dynasty ruled from 1644 to 1911, with revolts of the Chinese and non-Chinese minorities breaking out again and again. The anti-Manchurian Taiping uprising, for example, covered the entire south from 1850, the Promanjurian Boxer uprising around 1900 only the north.

In 1912 the monarchy was abolished by the Xinhai Revolution, which for the most part came from the south. Nanjing then became the capital of the republic again . In Beijing attempts at monarchist restoration failed in 1915-17 and the country fell under the rule of regional warlords . The “ Northern Militarists ” of the “Beijing Army” fought southern rivals but also each other for power in Beijing. In the south, the republican nationalists of the Kuomintang rose above all from 1917 , whose counter-government conquered Nanjing Canton in 1927 and Beijing in 1928, but was then embroiled in a Chinese civil war with Mao Zedong's communists and in the war with Japan . After the defeat of Japan in 1945, Mao's troops succeeded in conquering Nanjing and the south in 1949 after taking Beijing. The nationalists under Chiang Kai-shek had to retreat to the island of Taiwan .