The Tarim Basin ( Chinese  塔里木盆地 , Pinyin Tǎlǐmù Péndì ), which is located in the far west of the People's Republic of China , is the largest basin landscape in Central Asia with an area of ​​around 1,020,000 km² .

The large landscape without drainage, which is about 1,500 km long in west-east direction and around 600 km wide in north-south direction, is located in the Uyghur Autonomous Region of Xinjiang between 780  m altitude (at the former salt lake Lop Nor ) in the east and 1410  m (near Hotan ) in the south.

In the center of the Tarim Basin , through which the Tarim flows in a west-east direction, extends the Taklamakan desert , which has emerged over the course of millions of years because of the continental climate and the low rainfall resulting from the shielding of the aforementioned mountains.

Beyond the foothills, in the north - from west to east - lie the historical region of the Seven Rivers , Djungaria and the Turpan Depression , in the west the Ferghana Valley with the transition to Transoxania and in the east the Hexi corridor as a connection to China proper. In the south, behind the Kunlun Shan Mountains, lies Tibet .

The Tarim Craton extends under the Tarim Basin , the beginnings of which extend into the Neo-Archean . The docking of the Tarim Craton and the North China Craton adjoining it to the east with North Asia resulted in the Central Asian mountain formation, with the South Tian Shan Ocean being closed. In the early Permian a quarter of the area was one of Trapp covers, which, like the whole basin of the Permian with strong his part sedimentary layers was covered. The northward movement of India pushes the north edge of the Tarim Basin under the Tian Shan , the south edge under the Kunlun Mountains. 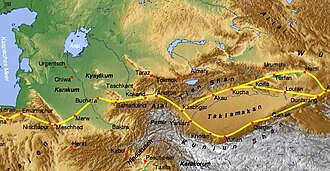 Central Asia with the Tarim Basin (right, around the Taklamakan Desert) and the course of the Silk Road (yellow) 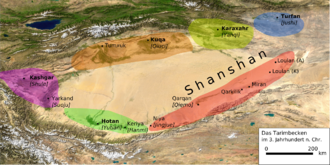 Tarim Basin in the 3rd century

The old Uighur name for the Tarim Basin is 'Altishahr' (آلتی شهر, Алтә-шәһәр, translated: 'Six Cities'); this name was used widely in the 18th and 19th centuries. 'Kashgaria' is another name of the Yarkant Khanate , which existed from 1514 to 1680 and is also called the Kashgar Khanate. The insurgent Jakub Bek was also called 'Emir of Kashgaria' from 1867; another name for the country he ruled was Jetti-Schahr ('Seven Cities Land').

The basin lay on the route of the Silk Road , which divided here: the two branches led along the northern and southern edges of the central, but inaccessible Taklamakan Desert. Oasis cities such as Hotan ( Khotan ), Kashgar and Aksu developed around them . Other cities are Korla (Kurla) and Aral . Ruined cities are Shorchuk , Niya and Andi'er .

From 200 BC A climate change began: the rivers became richer in water and the conditions for agriculture improved. Numerous cities were founded (for example in Loulan, Miran, Haitou, Yingpan, Merdek and Qakilik); however, some cities had to be abandoned after another change in climate up to the 5th century due to lack of water.

The Assi (Tocharer) were temporarily resident in the region around the basin. In the west also Saken . The Tarim mummies are partially assigned to these two groups. 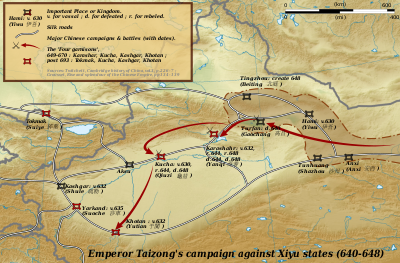 The advance of the Chinese from 640 onwards. With the 4 garrisons of Anxi (red) and other cities (black)

In the 6th century the cities of the Tarim Basin came under the rule of the Hephthalites , around 630 under that of the western Kök Turks , from 635 onwards the Tang Chinese established themselves . They established the “General Protectorate for the Pacification of the West” and the four garrisons of Anxi .

The Tibetans reached the Tarim Basin as early as 670 and gained influence on the southern edge; they had sovereignty especially in Kashgar until 728. The Chinese influence declined during this period, but Khotan remained allied with them. In 791 the Chinese were completely expelled by the Tibetans.

From 787 there were clashes between the Tibetans and the Uighur Kaganat over Beiting , Khotan and Turfan . The Tibetans could claim Khotan, the border was probably the area around Turfan. During this time the allied Chinese and Uyghurs faced the allied Tibetans and Karluks .

In 840, after the destruction of their empire , the Uyghurs fled to the northern Tarim Basin and founded rulers such as the state of the Ganzhou Uyghurs, which lasted until 1030, and the empire of Kocho , which defended itself against the advancing Qarakhanids in the 11th century and subjugated it in 1130 the influence of the advancing Kara Kitai fell.

After capture by the Mongolian from the area 1218 to belonged Mongolian Reich and after the division of the Mongolian Empire 1294 to Tchaghatai-Khanat .

The Islamic Yarkant Khanate (also 'Khanate of Yarkand' or 'Khanate of Kashgar') was founded in 1514 as the successor to Eastern Chagatai Khanate and existed until 1680.

The Tarim Basin was conquered by the Djungarian Khanate , which was established in 1640 - during its decline from 1745 the oasis cities tried to gain their independence and also refused to pay tribute to the Qing dynasty until they were conquered by the Qing by 1758.

Lake Lop Nor had already dried up due to drought in 1921. Starting in 1949, hydraulic engineering projects increased the water shortage in the basin, which was perceived as an environmental catastrophe from the 1980s at the latest.

Large oil and gas reserves have been discovered roughly in the middle of the Taklamakan. To develop it, an asphalt road was built at a cost of around 10 million euros per kilometer, which completely crosses the desert from Bügür ( Luntai ) to Minfeng (Niya) in a north-south direction. This road is provided with sand dune reinforcements on both sides and has its own street cleaning service.

Oasis economy exists in the Tarim basin on the Tarim and its tributaries as well as at the edge of the basin.