The Aneto in the Pyrenees 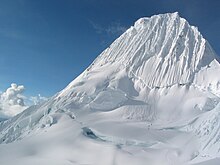 The Alpamayo in the central Peruvian Andes

The Fitz Roy in the Patagonian Andes

Hamlet in the subalpine zone

According to the definition in Diercke's dictionary of general geography, a high mountain range is understood to mean “a larger full form that rises significantly above sea level and has special geo-ecological features”.

In the history of high mountain research , there has long been a search for a generally applicable definition for high mountains. It arose from the need to mark the Alps in Central Europe as opposed to the low mountain ranges of Central Europe and it should include all high mountains from the Arctic to the inner tropics, the oceanic coastal mountains to the high mountains of the absolutely dry zones as well as volcanoes with a high mountain character. Carl Troll's definition , which “ required recent or former glaciation, an elevation above the climatic tree line and the existence of a solifluction stage with the geomorphological processes of frost weathering” , had first proven to be powerful .

Since the definition of trolls only included the area above the tree line, but not the foot of the mountain, and did not include polar and dry mountains and volcanoes in the definition, the attributes were further added. The following criteria are therefore necessary:

Physiogeographically , high mountains in the middle latitudes (approx. 40–70 ° north / south) are characterized by glacial forms such as cirques, ridges and wall distributions, which can be found in the summit corridors at heights from about 2000 to 2200  m , wall distributions also deeper. Likewise, the occurrence of recent solifluction and the reaching of the tree line are used as landscape ecological aspects. In terms of landscape (geomorphological), steep forms and large differences in height in a small area are characteristic of high mountains, associated with a pronounced structure in vegetation levels.

In addition to the designation of a mountain range as such, the term also only describes the altitude level , the high mountain level, which - in the Alps and other mountains of the temperate latitudes - comprises the two levels divided at the frost line , alpine and nival , and above the low mountain range (montane ) extends.

While in Central Europe the demarcation to the low mountain range or the low mountain range , which do not even reach the high mountain range, is from about 1500 or 2000  m after the tree line (because from this altitude level the rock formations are largely exposed) as well as colonization (upper limit of ecumenism , the permanent settlement area ), the picture is very different depending on the climatic zone : In the (sub-) tropical Andean area, for example, even larger cities are preferably located at 2000 to 3500  m above sea level, the criterion of settlement does not make much sense here, and the situation is similar in Ethiopian highlands of Abyssinia or the Himalayas .

Overview of the most important high mountains 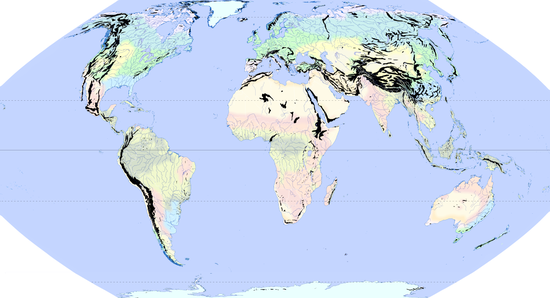