The title of this article is ambiguous. Further meanings are listed under settlement (disambiguation) . 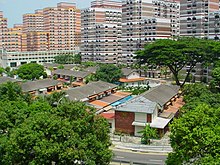 Traditional and modern form of settlement in Singapore , Toa Payoh district in the central region

A settlement , also settlement, place or locality, is a geographical place where people have settled and live together for the purpose of living and working . The term settlement usually refers to sedentary forms of life; H. permanent, at least long-term living in buildings . In this case one also speaks of the fact that people settle in a place or in a region or settle there (see also settlers ). People may initially live in makeshift or temporary structures before permanent buildings are erected. In the case of makeshift accommodation or sleeping places that are only intended for short use from the outset, it is more likely that a camp is set up or set up (e.g. tent camp , field camp , holiday camp , base camp for expeditions, protest camp). Refugee camps are mostly set up with a provisional character, but can develop into a permanent form of settlement.

Settlements can have very different dimensions, from Einsiedlerhof to villages to metropolitan areas with several million inhabitants. From a certain size onwards, a functioning settlement usually also includes economic , cultural , social and transport structures . Settlements and places usually have their own settlement name (place name, oikonym).

Deviating from this, districts or satellite towns of existing localities are also referred to as settlements that were laid out as planned districts; often these are residential areas in open construction . This applies in particular to large housing estates , larger cooperative housing estates , satellite towns, but also settlements made up of so-called settlement houses ( small settlements ). In the latter case, the term settlement is sometimes simply the name of the district, especially if the core town has more village dimensions (e.g. Trogen , district settlement).

Informal settlements are built without a permit and without land ownership.

In archeology, the term settlement serves as a neutral term for any site with houses, huts or other structures that were used for residential purposes. The length of stay can range from a few days to several centuries, if not millennia ( Tell ). Single houses are also referred to as settlements. The term village assumes the existence of jointly used structures or facilities.

In larger municipalities, different types of settlement often exist side by side. When 11 million displaced persons had to be taken in in Germany in the immediate post-war period , new building areas with uniform house types (“ settlement houses ”) emerged, often along a street in the outskirts of the villages. The population of many villages in rural areas doubled in the course of the settlement construction in the 1950s.

New living space also had to be created for the repatriates and ethnic repatriates who arrived in the 1990s and 2000s . In addition, there were comparatively few single-family houses in the new federal states . After the fall of the Wall, new "settlement areas" emerged, but these were laid out more individually and more generously than after the war.

Differentiation according to the size of the settlement

Even a plot of land with a single inhabited building can be a settlement. A single settlement comprises a single building or two neighboring buildings; a hamlet consists of a few buildings. For very small settlements with only one or a few buildings there are different names, some of which are only regionally customary, such as homestead or wasteland .

A distinction is made in the topographical settlement identification of Statistics Austria :

Especially in northern Germany, Flecken is a name for a smaller but locally important settlement. It can be a village or a city or a district.

Small settlements above a certain size are called "village", medium and large settlements " city ". In practice, however, this rough distinction does not always match the circumstances. Village is a term used in the rural settlement structure, and the right to use the designation city in Europe does not depend directly on the number of inhabitants, but on city ​​law (the Croatian town of Hum has around 17 inhabitants).

In Germany, if the settlement bears the title "City", a distinction is made according to the number of inhabitants:

Cities with more than 1 million inhabitants are called metropolis referred beyond agglomerations as a megacity . The term metropolis does not only refer to the size of a city. A metropolis is a large city that forms the political, social, cultural and economic center of a region or country.

Differentiation according to the arrangement of the buildings

Newly created settlements often have very special shapes. However, over time, the characteristic shape often disappears. But especially in village forms of settlement, the shape is often retained for a long time.

A distinction is made between the following forms:

Differentiation according to the type of development

Examples of naming according to the type of apartment or house:

Differentiation according to social aspects

Examples of settlements in which only people live who meet certain criteria or in which special rules apply:

Types of settlement in individual countries and regions

In Austria there are a total of about 55,000 places (settlement names  ) - listed in the Austrian map (ÖK) / Geonam -, from cities to individual locations. There are also numerous homesteads with vulgar names that are not recorded in this map series. These places are combined into a total of 17,368 localities (postcode areas) and 2,357 municipalities (political units).

The lower limit of the UN settlement unit  (SE) was chosen in Austria with 501 inhabitants. According to this international definition, there are 1,629 settlement units. They comprise a total of 1,653,456 buildings (71.1% of all buildings in Austria), their total population is 6,682,076 (79.8% of the total population), that is, one fifth of all Austrians live in places with less than 500 inhabitants. The average size of a settlement unit is 1,015 buildings with 4,102 inhabitants, so it is in the range of a small town. On the other hand, a significant part of the approximately 2,300 municipal capitals and a large part of the other 15,000 local capitals are smaller than 500 inhabitants.

The relationship between the settlement names, villages and settlement units provides information about the local settlement structure: The state of Salzburg has 6,300 places, but only 114 settlement units, which speaks for many small settlements, while Burgenland has 850 places out of 129 units, i.e. primarily larger places. Styria has most of the towns in Austria, but only half as many settlement units as Lower Austria, so it is structured in a more small-town manner. Lower Austria has three times as many inhabitants as Salzburg, but only twice as many place names, which is due to the scattered settlement unnamed in the ÖK, while Salzburg has more closed places. The 150 place names in Vienna are the ingrown pre- and surrounding places , now the districts , parts of the district and Grätzl form, still has the city as much rural areas that in the east of Vienna three other currently independent settlement units result ( Aspern , New Sling , Süßenbrunn ).

According to a resolution of the All-Russian Central Executive Committee and the Council of People's Commissars of September 15, 1924, urban settlement types are all settlements with at least 1,000 inhabitants on the condition that only 25% of the population live from agriculture .

The rural settlement types include:

Other types of settlements

In some parts of Russia populated by Turkic peoples and Islamic successor states of the Soviet Union, villages are referred to as Aul (Russian Аул ).

Parts of Poland belonged to Russia in different periods of Russian history . The Russian term Местечко comes from this period from the Polish Miasteczko for urban-type settlements and thus also correspond to a minority town . In rare cases this term is also used to refer to settlements with a significant Jewish population.