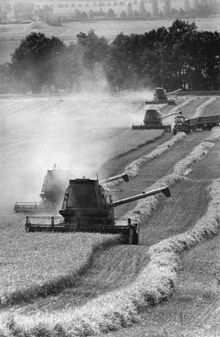 Combine harvester of the progress E 512 type during the wheat harvest near Großbothen , Grimma district , 1986.

The collectivization and industrialization of agriculture is one of the basic ideas of socialism .

“We will break the rule of the big landowners, we will expropriate their land without compensation and hand it over to the poor peasants, we will create Soviet goods with state-of-the-art machinery, equate the working conditions of the rural proletariat with those of the urban workers and involve many millions of working peasants in the construction of socialism. "

- Program declaration of the Central Committee of the KPD for the national and social liberation of the German people of August 24, 1930

See also : Agriculture in the GDR

Establishment of the LPG

On June 8, 1952, farmers from Merxleben near Bad Langensalza founded the GDR's first agricultural production cooperative with the approval of the Central Committee of the SED. At the Second Party Conference of the SED in July 1952, its chairman Ernst Grossmann gave a speech as a delegate, which Walter Ulbricht praised. The SED then decided to take measures to set up further cooperatives . This allowed agricultural production cooperatives to be approved.

The LPG were established in a founding meeting, had to give themselves a statute according to the legally prescribed model statute and were confirmed by state bodies. Not only farmers with their own farms could become members of an LPG, but also agricultural workers and other citizens.

Initially, three different types of LPG were formed (Type I, Type II and Type III). Depending on the type, the farmers brought their arable land (I), their machines (II) and the entire agricultural operation with cattle, machines and buildings (III) into the cooperative. The farmers also had to bring in cash ( inventory contribution ). Type III LPG were initially rare because there was a lack of sufficiently large stables. Many LPGs only changed later, often under pressure from the party and state, from Type I or II to the now dominant Type III.

Particularly in the late 1950s, farmers were increasingly subjected to economic and psychological pressure to join the mostly uneconomical LPG. The individual farms were systematically disadvantaged when lending machines through the machine lending stations (MAS), later machine-tractor stations (MTS), so that the duty, the obligation to deliver a certain amount of agricultural products, was increasingly difficult to meet. After the Second Party Conference of the SED in 1952, until the Wall was built in 1961, numerous farmers fled the GDR in order not to have to become members of an LPG. Their operations were initially managed by the local state farms (ÖLB) and later integrated into the LPG after the land was expropriated .

Harvest kindergarten of the LPG in Gerdshagen , 1983

In the spring of 1960, the collectivization of agriculture was forcibly terminated by a campaign by the SED, the so-called Socialist Spring in the countryside . From this point in time, apart from exceptions such as the Marienhöhe farm , there were hardly any individual farmers. On April 25, 1961, Walter Ulbricht announced “full collectivization”. About 20% of the GDR population were affected by the despotism of this forced collectivization.

From the mid-1960s onwards, cooperation between the LPGs was promoted with the aim of achieving greater concentration and specialization in production. During this process and beyond, many LPG merged, the number of which thus fell from 19,313 to 9,09 between 1960 and 1970. At the end of these upheavals, the Cooperative Plant Production Departments (KAP) stood. In these, the field management of several LPGs was operated jointly, so that the "remaining businesses", as they were sometimes called, largely only kept livestock. In the mid-1970s, the SED forced the conversion of the KAP into LPG plant production (LPG (P)) and VEG (P). The administrative separation of animal husbandry ((T) = animal production) and agriculture, which was manifested with the formation of the plant production operations, was highly controversial among farmers, as it had numerous negative effects. For example, the transport and administration costs increased. The specialization corresponded to general trends in the western countries, but was exaggerated, so the KAP had in some cases the unmanageable size of entire districts. In this regard, under Werner Felfe , the SED made tentative changes in agricultural policy in the early 1980s.

Up until German reunification, agriculture was mainly carried out in around 4,500 LPGs. After reunification in 1990, the LPG had to adapt to the new social and economic circumstances and, in particular, to the existing structures of federal German commercial law. The LPG dissolved completely or partially, remaining or reduced LPG changed mainly as a registered cooperative (e. G.) or as a GmbH , since the form of the uniform cooperative ownership of the LPG did not correspond to federal German commercial law. These remaining large farms largely dominate agriculture in eastern Germany. In the event of dissolution, the cooperative ownership was divided in favor of the cooperative owners, who in turn began their farming as restorers and were paid out. In accordance with the Agriculture Adaptation Act , which regulates the dissolution of the LPG and its transition to other legal forms, the inventory contributions were also to be repaid, provided that the LPG was able to do this economically. In many cases - in the opinion of the authors of a comprehensive legal study in "almost all" - the transition was not legally compliant. There were numerous legal disputes that were conducted with "unprecedented severity", so that the Frankfurter Allgemeine Zeitung spoke of a new "peasant war" between former members and LPG board members.

The majority of the LPGs were transformed into agricultural cooperatives during the substantial restructuring processes up to 1992. As a result of the far-reaching structural change from a planned to a market economy, more than three quarters of those employed in agriculture lost their jobs within a decade. The large farms that emerged from the LPG are heavily dependent on subsidies and the attractiveness of the rural areas of Eastern Germany still suffers significantly from the former socialist agricultural monostructure, as the dominance of the large farms that emerged from it was cemented. This explosive topic is largely taboo and concealed by the East German state politics and regional press. While almost all agricultural areas were intensively cultivated in the GDR era, regardless of the quality of the soil, parts of the cultivated areas used for agriculture were taken out of cultivation with the adaptation to the heavily regulated and subsidized EU agricultural market, in order to make structures more competitive in view of the tendency towards overproduction and high competitive pressure to be able to build. 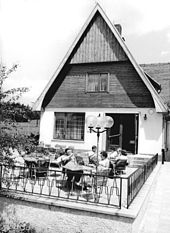 The cooperative and land law was regulated in the special field of LPG law . The land brought in by the farmers remained their property, but with far-reaching sales restrictions. The LPG had a legally guaranteed comprehensive right to use the agricultural land. Agricultural buildings, inventory and forest areas became the property of the LPG.

The LPG operated as a legally independent company. The LPG members received, insofar as they worked for the LPG, a performance-related wage and a profit share, which was included in the year-end payment. Farmers who brought in agricultural land also received an area-related share of the profit, the so-called land share.

Honoring the LPG in Treppendorf

GDR postage stamp from 1987 for the anniversary "35 years LPG"

The LPG were formally managed democratically. The model statute stipulated that the board of directors and important matters of the LPG would be decided at a general meeting. The SED and state organs, however, exerted a great deal of influence on the decisions, so the very influential chairmen were often appointed from outside the SED party. The work in the LPG was organized through brigades and departments. The LPG members were legally obliged to dedicate all their work to the LPG. According to the model statute, leaving an LPG or taking up employment outside the LPG was dependent on the approval of the LPG's general assembly and was considered politically undesirable. So it was not easy for members to leave the LPG if the other members resisted.

Most of the LPG statutes stipulated that the cooperative farmers could run " individual housekeeping " to a small extent in addition to their work in the LPG . Each member was entitled to 0.5 hectares of land on which they were allowed to keep livestock, until 1977 only in limited numbers.

Other forms of industrial agriculture

In addition to the LPG, there were, albeit in a much smaller number, state-owned agricultural production companies, the state-owned goods . In horticulture it was the GPG, Horticultural Production Cooperative, with a comparable structure .

The LPG were very similar to the Soviet collective farm , but the land was state property. There were similarly organized farms in all Eastern Bloc countries , albeit to different degrees.