This article is about a Berlin newspaper. For the term daily mirror see also daily policy .

Der Tagesspiegel (spelling: DER TAGESSPIEGEL ) is a daily newspaper from Berlin founded in 1945 . Before the Berliner Zeitung and the Berliner Morgenpost, it has the highest circulation among the Berlin subscription newspapers and, unlike the Berliner Zeitung, is mainly read in the western districts of the city. The sold edition is with the Potsdam Latest news together 106,303 copies, down 24.1 percent since 1998. He appears in the publishing Der Tagesspiegel , where the DvH media with 80 percent stake and Sebastian Turner with 20 percent. The newspaper's motto is rerum cognoscere causas  - "to know the causes of things".

The first edition of the daily newspaper founded by Erik Reger , Walther Karsch , Heinrich von Schweinichen and Edwin Redslob appeared after the Second World War on September 27, 1945 under the license of the Information Control Division of the American military government . The paper was initially distributed in Berlin and Brandenburg, but was undesirable in the Soviet occupation zone . In 1949, the Berlin blockade limited sales to West Berlin.

For the establishment of the newspaper, the businessman and former paper dealer Heinrich von Schweinichen provided his co-partners with the founding capital of 5000 Reichsmarks and financed the newspaper out of his own pocket in the first few months of its existence. In June 1946, for reasons that had not yet been fully clarified, von Schweinichen's license was withdrawn by the US occupying forces. While the other founding editors are still mentioned today in the imprint of the Tagesspiegel , the name of Schweinichens is not mentioned. 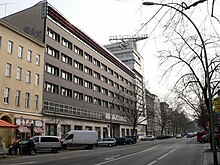 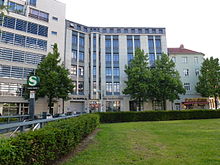 Internally, in 2001, the sheet was included in the national newspapers. Accordingly, it describes itself on its front page as the "newspaper for Berlin and Germany". In 2002, when the application to the Federal Cartel Office for approval of the merger of the publishing houses Holtzbrinck and Berliner Verlag was finally rejected, it was asserted that a dominant position on the Berlin newspaper market was not to be expected as a result of the merger. The Tagesspiegel serves a different market in that it pursues a higher quality standard than the other two Berlin subscription newspapers Berliner Zeitung and Morgenpost , and it competes more strongly than these with large national newspapers. At that time, however, less than seven percent of the circulation was sold outside the core circulation area, although this proportion was higher than the other Berlin subscription newspapers. In 2007 the Tagesspiegel was by its own account the most cited capital city newspaper for several years. In 2009, the publisher Dieter von Holtzbrinck announced that he would give the Tagesspiegel a long-term increase in national importance. At the end of 2014, the jury of the industry magazine medium magazin still honored the Tagesspiegel with a prize in the regional newspapers category.

One of the editors , Giovanni di Lorenzo, described his conception of the sheet and layout with the words: "A quality newspaper can only choose between being and appearing."

Like most German daily newspapers , the Tagesspiegel has lost circulation in recent years , albeit significantly less than its local rivals Berliner Zeitung and Berliner Morgenpost . Since the third quarter of 2015, the circulation has been reported together with the Potsdamer Neuesten Nachrichten , whose last separate circulation report amounted to 8,276 copies. The number of copies sold has fallen by an average of 2.1% per year over the past 10 years. In contrast, it rose by 0.9% last year. It is currently 106,303 copies. The share of subscriptions in the circulation sold is 82.4 percent.

from 2015 including Potsdam Latest News

Motto on the Tagesspiegel building: Rerum cognoscere causas - Recognizing the causes of things

Since 1946, under a globe in the head of the newspaper, the Latin motto has been : rerum cognoscere causas . The quote is from Virgil and can be translated as "Recognize the causes of things" or more freely as "Get to the bottom of things".

The sheet initially appeared in the Rhenish format , originally set in four columns, later in five columns. After the production technology was changed ( Nordic format , farewell to lead typesetting ), a thorough renovation took place in 1991 (six columns, four books, daily leading article, etc.). In 1995 there was a redesign by Mario Garcia , which was characterized by more elaborate front pages for the weekend supplements and the Gulliver bread font. In 1999 the design was revised under the new editor-in-chief Giovanni di Lorenzo and later replaced by another redesign, which still shapes the Tagesspiegel today.

For its layout is Tagesspiegel with the World's Best-Designed Newspapers Award was awarded of 2004.

The paper is divided into the classic sections of politics , business , sport , culture , miscellaneous and the Berlin-Brandenburg part between politics and business. On Saturdays the newspaper contains a section with car ads and a real estate section . On Sundays, in addition to the job and travel market, the magazine supplement Sonntag appears , which always contains a large interview .

In 2007, the offer sheet “ Second Hand” was taken over, which has been an online portal for classified ads since the print edition was discontinued in 2013 .

With the address tagesspiegel.de under the Tagesspiegel Online brand , the publisher operates an online news portal. The online editor-in-chief is Christian Tretbar.

An online archive is partly accessible free of charge and contains parts of the online edition from January 1, 1996. Additional articles published at tagesspiegel.de can be found via the search mask of a separate, chargeable archive of the Tagesspiegel using the supraregional " coat " and layout Potsdam Latest News can be accessed. Older print articles can also be requested for a fee. However, the texts adopted by news agencies are missing.

On July 1, 2020, Tagesspiegel Plus launched a paid content offering.

Since November 24, 2014, the Tagesspiegel online offer has been supplemented by the daily newsletter Tagesspiegel Checkpoint, designed by editor-in-chief Lorenz Maroldt . In December 2016, around 93,000 people subscribed to this. The newsletter was awarded the Grimme Online Award 2015 and the European Digital Publishing Award 2020 in the “Business Model” category. The editor in charge of the Checkpoint is Ann-Kathrin Hipp.

Since May 2019, Tagesspiegel Checkpoint has been available from Monday to Saturday as a paid subscription and has its own website. As a short-haul checkpoint, there is still a free abridged version of the newsletter from Monday to Friday, which provides information on the most important news of the day. A monthly podcast format has been in existence since March 2020 under the title "Eine Runde Berlin".

In 2015, the Freischreiber interest group awarded the paper the Hell Prize for its irresponsible treatment of freelance authors. The reasoning stated that the publisher had shown "particularly shabby" behavior towards its freelancers . After an “advertising gap” in October 2015, he “put the collaboration with his freelance employees on hold from now on” and thus demonstrated a low level of appreciation for these long-term employees.

The editors-in-chief are Lorenz Maroldt and Mathias Müller von Blumencron .

The members of the editor-in-chief are Anna Sauerbrey and Christian Tretbar.

The managing directors are Farhad Khalil and Ulrike Teschke.

Other members of the editorial team include a.