This article or section needs revision: List of Award Winners
Please help us improve it , then remove this checkmark. 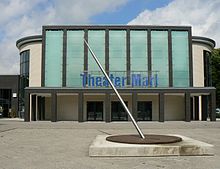 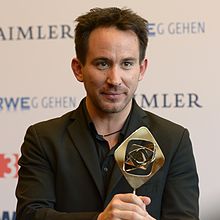 Press conference to announce the 2013 winners

The television prize is awarded annually by the Grimme Institute in Marl . Since 1964, this has honored productions and television achievements that "make excellent use of the specific possibilities of the medium of television and can serve as a model for television practice in terms of content and method" (Statute of the Grimme Institute). The prize was donated by the German Adult Education Association (dvv) on the initiative of Bert Donnepp . Until 1973, the prize was awarded by the island's adult education center .

In 1977 there was no award ceremony because of the relocation of the Marl Education Center. With ten Grimme Awards, the director Dominik Graf is the most frequently awarded award winner (as of 2013). In addition to the Grimme Prize, the institute also awards the Grimme Online Award and the German Radio Prize .

The trophy of the Grimme Prize was designed by Development Group 5 of the Ulm School of Design (HfG) under the guidance of Otl Aicher . The design includes several reflective surfaces that are reminiscent of a screen. They are arranged one inside the other in such a way that a complex mirror image is created that can be understood both for the technology of broadcasting through a relay and for television itself, the means of broadcasting and dissemination.

The pricing goes through a three-stage process:

In the first stage, viewers, broadcasters and producers can submit proposals. The proposals can, but do not have to be justified. All proposals that meet the formal requirements of the competition will be accepted neutrally and equally. Between 500 and 600 proposals are submitted each year.

In the second stage, three nomination commissions discuss in three meetings lasting several days which proposals are to be nominated, i.e. presented to the jury for decision. Between 50 and 60 programs are selected for the three competition areas of fiction , entertainment, and information and culture .

In the third stage, the three juries decide on the final award of the prize in meetings lasting several days. A maximum of twelve Grimme Prizes will be awarded in all competition areas.

The nomination commissions and juries that are appointed by the Grimme Institute for this task are made up of television critics, journalists, media scientists and education experts.

In addition, there were special honors and honorable mentions . In addition, the press jury awarded a prize and also awarded honorary recognitions . From 1970 to 1985, the General Programs jury took over .

Since 1968 a special prize has been awarded by the state government (since 1975 the Minister of Education and Cultural Affairs ) of North Rhine-Westphalia . Since 1969, the so-called audience award of the Marler Group has also been awarded as part of the award ceremony . From 1970 to 1979 a special award, sometimes also a sponsorship award, was awarded by the Stifterverband für die Deutsche Wissenschaft .