The title of this article is ambiguous. Further meanings are listed under Relay (disambiguation) .

A relay [ ʁəlɛː ] ( Pl. : Relay [ ʁəlɛːs ]) is a by electrical current driven, electromagnetically acting, remote controlled switch with normally two switch positions. The relay is activated via a control circuit and can switch other circuits. 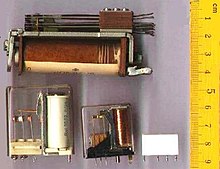 Telegraph relay from Hasler AG . These relays were used for the Gotthard Railway's telegraph network around 1900.

A mechanical relay mostly works on the principle of the electromagnet . A current in the excitation coil generates a magnetic flux through the ferromagnetic core and a movably mounted, likewise ferromagnetic armature located on it . A force is exerted on the armature at an air gap, causing it to switch one or more contacts . The armature is returned to its original position by spring force as soon as the coil is no longer excited.

Circuit diagram representation of a relay with a changeover contact

A contact is referred to as a normally open contact or normally open contact if it is open when the armature has dropped or the excitation coil is de-energized and closed when the armature or the coil is energized. A contact is referred to as a normally closed contact or normally closed contact if it interrupts the circuit when the relay is energized. A combination of NC and NO contacts is called a changeover contact or a changeover contact. A relay can have one or more such contacts.

A relay is "closed-circuit relay" when it is in idle state current flows through it and is attracted, for example, to monitor power failure or wire breakage. In the other and predominant case, in which it is de-energized in the idle state, it is referred to as an "operating current relay".

In the circuit diagram , relays are always drawn in the dropped-out state, even if they work as closed- circuit relays. Only in rare exceptional cases is the active state shown, which is then specially marked.

Relays are electromechanical components. They are mainly used for the following use cases:

Advantages and disadvantages of electromechanical relays

Electromechanical relays have been replaced in many applications by electronic switches that operate with transistors because of their disadvantages . Relays also have advantages over semiconductor switches, which is why they cannot be replaced everywhere 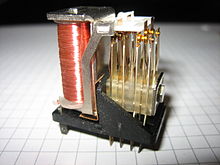 There is a very large number of different types and designs of relays. In addition, relays can be typed according to various aspects, for example according to the number of switching states possible in the de-energized state, according to design, size, area of ​​application, type or material of the contacts, switching capacity or functional principle. A relay can therefore often be classified as belonging to different types.

The main types are:

A relay for considerably higher outputs in heavy current engineering is called a contactor . The current strength and electrical voltage in the load circuit can be many times greater than in the coil. Contactors have a tie rod, the control of which requires a somewhat higher power, and they usually have several switching contacts of the same type, as are required for switching three-phase consumers. There are also so-called auxiliary contactors, which in turn serve to control the aforementioned main contactors.

Semiconductor relays are implemented with transistors or thyristors or triacs . They are very durable, suitable for high switching frequencies and unfavorable environmental conditions (moisture, aggressive or explosive gases).

With solid-state relays it is possible to switch alternating voltage during the zero crossing ( zero crossing switch ), with which disruptive impulses can be avoided. There are also semiconductor relays that switch at the peak of the mains voltage or immediately when activated, i.e. momentarily. Peak switches are used to switch inductivities that have little or no residual magnetization and therefore no hysteresis .

A galvanic separation between control circuit and load circuit is achieved with semiconductor relays by means of optocouplers integrated in the component . Compared to mechanical relays, semiconductor relays have higher losses in the load current path and therefore often have to be mounted on a heat sink .

So-called OptoMOS or PhotoMOS relays are similar in structure to optocouplers . On the control side, they work like an optocoupler with an infrared LED and, unlike the semiconductor relays described above, on the load side do not have triacs or thyristors, but MOSFETs with which they can switch direct and alternating voltages. They can only switch small currents, do not have to be cooled and have a lower voltage drop than semiconductor relays, but typically show a higher “ contact resistance ” than mechanical signal relays. They work bounce - free and wear - free and with switching speeds of a few microseconds.

Bistable relays are characterized by their property that they can adopt two different stable switching states when de-energized. The bistable relays include:

There are two types of relays that require polarity:

Automotive relays are robustly built relays that can withstand the increased requirements in motor vehicles with regard to shock resistance and temperature range. They work with the on-board voltage of 12 V or 24 V and can switch higher currents. As a rule, they have connections with 6.3 mm flat plugs . Often they already contain components (resistor, diode) in the housing to limit the mutual induction voltage of the coil. 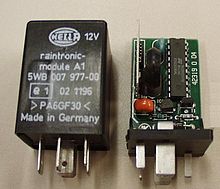 The "relays", which are designed as plug-in assemblies and a. are installed in the fuse box of motor vehicles, are often relays with additional functions or electronic assemblies or small control units .

Many of these small control units actually still contain a mechanical relay, but the term relay for the entire unit is more historical. In modern cars, most of the functions are integrated in larger central control units - the typical sound of the flasher relay is often generated either by loudspeaker or with a relay that does not switch any load. 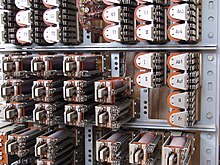 Flat relay and round relay in a telephone system from 1975

Relays have been used extensively in the electromechanical exchanges and telephone systems . They were used for the logical flow control when setting up and clearing the dial-up connections. Relays were permanently assigned to the subscribers in the subscriber circuit as well as the switching network , which mostly consisted of voters . The most important representatives of this type of relay, which can only be found very rarely today, include the flat relay , the round relay, the ESK relay and, as relays with special tasks, e.g. B. the test relay 55 . 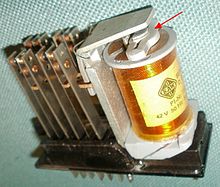 Electromagnetic relays cannot easily be operated with alternating voltage, since the magnetic field that is supposed to hold the armature constantly reverses its polarity and is therefore too weak or zero in the meantime. As a rule, the armature picks up at voltages with line frequency, but rattles and precise switching of the contacts is not guaranteed. The following relays can be operated with alternating current: 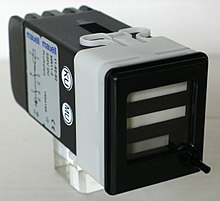 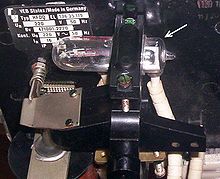 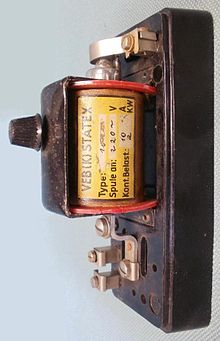 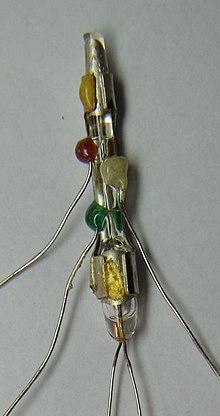 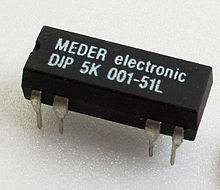 Relay in the broader sense 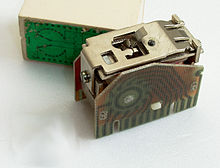 These relays are also provided with more or less complex mechanics or electronics.

Timing relays are available in electronic or electromechanical versions; they are used for time control in machines and devices.

One form of the timing relay is the pulse relay. After receiving an activation pulse, it switches the contact for a defined period of time, so it works in the same way as a monostable multivibrator . A typical example is a stairwell switch.

Monitoring relays use a sensor to report when certain preset values ​​are exceeded or fallen below. For example, temperatures, fluid levels , voltages, asymmetries in three-phase networks can be monitored using asymmetry relays or any other physically measurable variables.

The following table lists the most important characteristic values ​​used to specify a relay. In addition, a dimensional drawing, connection assignment, etc. is of course also of interest. The examples relate to a typical 12 V vehicle relay.

Identification of a relay

Standardized identification of the connections

If relays have several actuating coils, the other coils are labeled A3 / A4 etc. The first digit of the contact designation is increased numerically in a relay with several contacts, the last one indicates the type of relay contact. So called z. B. 53/54 the 5th switching contact, which is a normally open contact.

In the (German) telecommunications system, the following regulation is common (DIN 41220): One designates:

Usual designation of the switching contacts

In data sheets and comparison tables for relays, English abbreviations are often found for the number of switching contacts and positions:

The simplest switch has a contact point; one of the conductors is directly connected to the movable switching element:

There are also switches with two contact points, whereby the movable switching element either creates or disconnects the connection between the two conductors (common with contactors):

Switching of relays with transistors 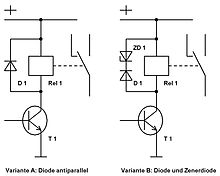 In order to prevent the destruction of the switching transistor (T1 in the figure), this counter voltage is short- circuited by a freewheeling diode (D1 in the figure) or limited to the forward voltage of the diode. However, this means that the magnetic field in the coil collapses more slowly and the switching time of the relay is significantly longer.

The disadvantages with regard to the switching time of variant A are solved by adding a zener diode (ZD 1 in the figure, variant B), the zener voltage of which should roughly correspond to the nominal voltage of the relay - the magnetic field in the coil can collapse much more quickly. It should be noted, however, that the reverse voltage of the switching transistor must still be greater than the operating voltage plus Zener voltage in order to prevent its destruction.

There are other protective circuits, for example with a parallel protective resistor or with an RC element ( snubber ) matched to the inductance of the coil . These measures work independently of polarity and are also suitable for relays with AC actuation.

Some relay types already have a built-in free-wheeling diode or a protective resistor.

There are also special switching transistors suitable for switching inductive loads, which in turn have a built-in limiter diode (e.g. the Darlington transistor 2SD1843).

History of the relay

Around 1820, research into electronic data transmission focused on electromagnetism. Early models were designed by André-Marie Ampère, Pierre-Simon Laplace and many others. Became known z. B. Joseph Henry in 1835, who developed communications from his laboratory to his house himself, or Charles Wheatstone , who introduced rail telegraphy in England in 1837 with William Fothergill Cooke. After correspondence with J. Henry, Samuel Morse improved the relay so that it responded to weaker impulses and used it as a signal amplifier . The idea of ​​a telegraph had been around since the mid-18th century, but the relay was ultimately the key to success. It had to be inserted into the signal path of the telegraph lines every 30 km in order to regenerate the incoming weak signals. This created the basis for transmitting impulses over long distances. The first demonstration of the telegraph took place between Washington, DC and Baltimore in 1844 . Based on the post office relay stations, where the mail riders could exchange their horses for fresh ones, the new device was named relay .

A major impetus for the further spread of the relay was the introduction of subscriber self-selection in telephone switching technology at the end of the 19th century. The first self-dialing device in Germany was put into operation on July 10, 1908 in Hildesheim for local traffic with 900 participants. National telephone traffic was gradually automated from 1923 and would have been inconceivable without the massive use of relay technology.

Relay at the beginning of computer development

The relay also enabled the development of the computer , which was first built in 1941 by Konrad Zuse under the name " Z3 " with 2,000 relays for the arithmetic unit and the memory.

In computer technology, however, relays were largely replaced by electron tubes as early as the mid-1940s . Later the function of transistors and integrated circuits (IC) was taken over.