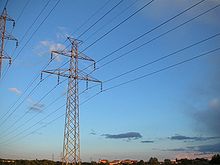 High-voltage lines for the transport of electrical energy

In addition to the generation of electrical energy, its transport and distribution are other areas of activity in energy technology. Electrical energy is transported and distributed with the power grid in the form of alternating current , from the generating power plants to the individual consumers. The use of three-phase alternating current in the form of three-phase high-voltage transmission has become established for energy transport , due to the savings in conductor material compared to single-phase alternating current. Distribution in medium-voltage and low-voltage networks is usually also carried out with three-phase current .

Cables made from high-temperature superconductors are already in use over short distances (<1 km).

The resistance of the conductor can also be reduced by using improved materials.

A lower current intensity and at the same time a voltage which is higher by the same factor can also be used for the same output, which leads to the high-voltage lines . The power grid is divided into different grid levels (high voltages for long distances, lower voltages for short distances). Power transformers in substations are used to convert voltage between the individual network levels .

However, the distances that can be overcome are also limited here, since the voltage cannot be transformed to any high level: the higher the voltage, the more difficult it is to design the insulation , and additional losses occur due to gas discharges such as corona discharges . In addition, the capacitive reactive current of a line increases proportionally to the square of the voltage. This leads to a reactive power requirement of the transmission line, which the line can already utilize to a large extent when idling, depending on the capacitance and the length of the line. The conductor now acts as a transmitting antenna and generates electrical and magnetic fields, the constant reloading of which causes considerable losses.

In the case of underground cables (as well as submarine cables ), which naturally have a large capacitance (the surrounding soil has a much higher dielectric constant than air), the cable distances are limited to around 70 km. This is why high-voltage direct current (HVDC) transmission is used for long cable runs, as is common with submarine cables . However, HVDC has the technical disadvantage that it can only transport electrical energy between two points, and it requires high-tech and cost-intensive converter stations to convert direct current into alternating current. In addition, a large-scale, meshed transmission network with multiple branches and cross-connections is not technically possible when operated with direct voltage, since, in contrast to alternating voltage networks or three-phase networks, the power flows cannot be controlled by means of phase shifts.

The electrical power loss is

d. H. a decrease in the current strength has a quadratic effect.

The demand for electrical energy in the public grid is strongly influenced by seasonal fluctuations. Less electricity is required for light and heat in summer than in winter. Large fluctuations in the load profile also occur during a day . A peak in the electricity demand of the network can be noticed especially in the morning between 6 and 8 a.m., between 11 a.m. and 1 p.m. and between 7 and 10 p.m. With today's technological developments, electrical energy cannot be stored economically to any significant extent . It follows that the generation and consumption of electrical energy must always be in balance. This leads to a complex and expensive infrastructure and regulation of the network and the power plants. Fluctuations in the generation and demand of regional power grids are compensated for by connecting several regional power grids with each other and in this interconnected network, if the energy requirement is too low, power plants are turned down or switched off or if there is an increased energy requirement, energy storage devices such as B. Pumped storage power plants and medium load power plants and peak load power plants are regulated up, or load shedding takes place.

In Europe, for example, the transmission grids , which are operated by the transmission system operators, are interconnected in the Association of European Transmission System Operators (ENTSO-E for short), formerly UCTE . The network frequency is regulated by two coordination centers in Brauweiler (Pulheim) / D and Laufenburg / CH.

Many energy producers are interrelated in a large power grid. The required amount of electricity must now be provided in coordination with one another. In fact, the provision of electricity depends on other factors as well. The German electricity market has been liberalized since the Energy Industry Act came into force in April 1998 and electricity is traded like a commodity on the EEX (European Energy Exchange) in Leipzig. Large energy supply companies ( E.ON , RWE , municipal utilities, etc.), but also private customers and industrial companies buy electricity from power plant operators. So depending on how much electricity an energy supplier sells, it will also produce it.

Subdivision according to the load responsibility 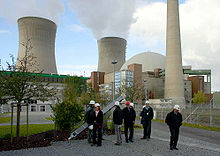 Subdivision according to the energy source

District heating power plants can only be implemented in the vicinity of metropolitan areas, as the heat generated must be taken from the immediate vicinity. District heating power plants are often combined with steam power plants, but can also be operated individually. In the thermal power stations, the remaining energy of the water is used at the turbine outlet. The steam is not cooled down to ambient temperature, but is fed directly or in the form of pressurized hot water at a higher temperature level through large pipelines into a district heating network. At the consumer, the steam or hot water gives off its heat and comes back to the power plant as water with a lower temperature.

Electricity is generated by rotating the rotor of a generator . In large power plants, these generators are exclusively synchronous machines . Such a synchronous machine generates a rotating field by means of its rotor, in whose winding a direct current flows . This field induces three sinusoidal voltages in the three winding systems of the stator, each phase shifted by 120 ° .

If the electricity demand of a power grid is increased, the generator has to provide more power . So, for example, the steam or water turbine has to transmit a greater amount of power to the generator. If it does not do this, the generator will run slower due to the greater resistance. Thus the frequency also changes - it becomes smaller until the load is shed . The network frequency is a characteristic feature that describes the electricity demand of a network. In fact, power plants are regulated according to the frequency of the power grid. If it is too low, the steam or gas turbines have to generate more power. If it is too high, the performance is reduced. This requires complex control technology.