Energy storage are used to store currently available but unused energy for later use. This storage is often accompanied by a conversion of the form of energy, for example from electrical to chemical energy ( accumulator ) or from electrical to potential energy ( pumped storage power station ). If necessary, the energy is then converted back into the desired form. Losses - mostly thermal - always occur during both storage and energy conversion .

According to energy form

District heating storage of the Theiss power plant with a capacity of 50,000 m³, which feeds the Krems district heating network. Storage capacity 2 GWh per charging process 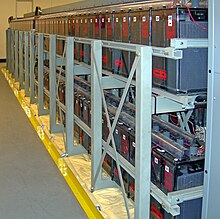 In addition, the term is sometimes used for containers that do not themselves contain energy, but fuel or fuels :

According to storage period

In addition, energy storage can be divided into short-term and long-term storage based on the storage period. For example, different fluctuation patterns in electricity generation by means of photovoltaics (PV) and wind power plants on the one hand and electricity consumption on the other hand require storage capacities for different periods of time. Depending on the time scale considered, different technologies are used, whereby the following time windows can be identified:

Long-term storage systems, on the other hand, can store energy for days or years and have a very high energy storage capacity per unit of power. They have a low self-discharge and have lower storage efficiencies and lower cycle numbers than short-term storage. These include gas storage, sensitive and latent heat storage, district heating storage, combustibles and fuels as well as some pump storage.

Electrical energy can only be stored directly in relatively small amounts in capacitors or superconducting coils. It is therefore still more economical to convert the energy into another type of energy with a loss and convert it back with a loss if necessary. The storage system itself can lose energy during the storage period. The sum of all individual losses can be considerable and make the process as a whole uneconomical.

When it comes to energy storage, the focus is mostly on the economic efficiency of the process, i.e. the investment and operating costs of the system and the overall efficiency. At least with large systems, it is usually not about a short-term increase in output. In the case of very small systems, such as electronic flash, the focus is sometimes on increasing the output, for example because the original energy source cannot deliver sufficient output. Also hybrid storage systems are possible, in order to provide long-term low or short-term high power requirements.

The information relates to the largest systems implemented in continuous operation .

Storage requirements due to the energy transition

Due to the energy transition, which u. a. For reasons of environmental and climate protection, as well as the finite nature of fossil fuels, plans to switch from conventional power plants with base load capability to mostly fluctuating renewable energies , there will be additional global demand for energy storage in the long term. Every storage solution has to assert itself economically against available alternatives. Examples of such alternatives are demand side management , demand response , additional power lines or the use of synergy effects (e.g. between water and solar / wind energy).

In this context, it is important to look at the energy system as a whole and in a coupled manner, and not just the electricity sector. This is the point of the so-called sector coupling u. a. in creating a very flexible electricity consumption across the various sectors of the energy system, which has the necessary flexibility to absorb the fluctuations in the generation of variable renewable energies. While z. B. Approaches that only consider the electricity sector alone, often requiring comparatively high and expensive electricity storage capacities, enable sector-coupled energy systems to reduce the use of comparatively expensive electricity storage systems, since the fluctuating generation of wind and solar electricity no longer only has to be balanced in the electricity sector, but less among other things, the heating sector or the transport sector can provide the necessary flexibility to compensate for fluctuations. So are z. B. large district heating storage is currently the cheapest form of energy storage.

There is only a need for integration measures for renewable energies from the second phase of the energy transition, which Germany has meanwhile arrived at. In this second phase of the energy transition, measures such as B. the establishment of intelligent power grids ( English Smart Grids ), the expansion of power grids, etc. take place. From this phase onwards, the use of short-term storage devices such as B. pumped storage or battery storage makes sense. Long-term storage systems such as power-to-gas technology are only necessary if there are high and longer excess electricity in the electricity system, as can be expected from a share of renewable energies of at least 60 to 70 percent. Here, too, however, it makes sense not to convert the synthesis gas back into electricity first, but to use it primarily in other sectors such as B. used in transport . The reconversion is the last step in the conversion of the energy system to 100% renewable energies.

A storage infrastructure that is set up too early can be ecologically counterproductive. So is z. For example, up to a share of approx. 40% renewable energies in annual electricity production, more flexible utilization of existing conventional power plants is the most advantageous option for integrating renewable energies. Only then will additional storage power plants be required. Instead, storage facilities that are built beforehand enable lignite power plants to be better utilized at the expense of less environmentally harmful power plants ( hard coal and natural gas) and thus increase CO 2 emissions . For a supply with 100% renewable energies, energy storage systems are absolutely necessary, whereby the necessary storage requirements can be greatly reduced by measures such as the international expansion of the power grid and the increase in network interconnection points. Building up storage facilities increases the production costs of renewable energies; with a full supply with 100% renewable energies, the costs of energy storage make up approx. 20-30% of the electricity production costs .

For homeowners who generate their own electricity through photovoltaics , decentralized electricity storage systems have been economically viable since 2013. According to the German Solar Industry Association , the prices of battery storage systems ( solar batteries ) fell by 25% in 2014 . Since May 2013 KfW has been promoting the installation of battery storage systems, including incentives for grid stabilization. As a result, the demand rose by leaps and bounds. After the funding for battery storage was initially due to expire on December 31, 2015, the funding was extended in a modified version, contrary to Sigmar Gabriel's original position, after fierce criticism from numerous associations and companies. It is expected that home energy storage will become more prevalent, given the growing importance of decentralized power generation (especially photovoltaics) and the fact that buildings represent the largest share of total energy consumption and feed-in tariffs are below the grid tariffs. A household with only photovoltaics can achieve an electricity self-sufficiency of a maximum of around 40%. In order to achieve a higher level of self-sufficiency, an energy storage device is required in view of the different time courses of energy consumption and electricity production from photovoltaics.

The combination of photovoltaics with battery storage has seen high additions, especially in Bavaria and North Rhine-Westphalia, as the storage monitoring of the Federal Ministry of Economics shows. It is also possible to use old batteries from e-cars for storage power plants. These then still have around 80% of their storage capacity and can be used for another 10 years to store electricity or to provide control power. A study by the Fraunhofer Institute for Systems and Innovation Research (ISI) published in January 2020 comes to the conclusion that from 2035, due to the growing market share of electric vehicles, an annual battery capacity of 50 to 75 GWh will be available from disused electric vehicles. These inexpensive "second-life batteries" could then be used for industrial electricity storage and ensure greater system security. For optimal use, however, standardized battery management systems would be required so that there are as few compatibility problems as possible. Pilot projects are carried out, but only with batteries from one vehicle model. There is therefore still a need for further research.

Portal: Energy  - Overview of Wikipedia content on the subject of energy