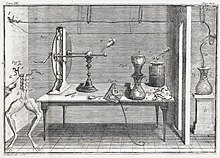 Experimental arrangement of the frog legs experiment, from the De viribus electricitatis in motu musculari

The name goes back to the Italian doctor Luigi Galvani . He discovered that a frog's leg nerve touched with instruments made of various types of metal triggers muscle twitching, since the redox system thus formed, as a galvanic element, builds up voltage so that current flows.

The evidence of the earliest galvanic cells in antiquity is controversial; it was possible to generate an electrical voltage with a replica of the approximately 1800 year old Baghdad battery . Whether the original antique clay pot was originally used for this purpose is not known and is a hypothesis.

The development of galvanic cells, as they are common today, began in the more recent modern times . The research work was triggered by observations made by Luigi Galvani around 1780: When he touched frogs' legs with two wires made of different metals, the muscles twitched. In 1790, Alessandro Volta showed that animal components are not necessary for the construction of battery cells. In the following years he used paper soaked in saline solution, which was stacked between metal plates made of copper and zinc and was known as the voltaic column .

The Leclanché element was patented by Georges Leclanché in 1866 and is one of the “wet batteries” that are no longer used today. It is an electrical battery (primary element), so it is not rechargeable and in its original form was equipped with liquid electrolyte. Technical improvements to the Leclanché element led to a gelled electrolyte and it is a forerunner of dry batteries such as the zinc-carbon cell and the alkaline-manganese battery that are common today.

The nickel-iron accumulator , one of the first rechargeable accumulators (secondary cell), was developed almost simultaneously and independently of each other by the American Thomas Alva Edison and the Swede Waldemar Jungner around 1900. It is considered the forerunner of the later developed and improved nickel-cadmium accumulator .

Symbol of a galvanic cell with terminal inscription 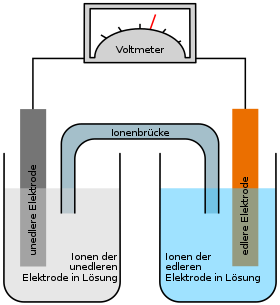 Principle of a galvanic cell

The function of the galvanic cells is based on a redox reaction . Reduction and oxidation take place separately in a half-cell ( half- element). The circuit is closed by connecting the two half-cells with an electron conductor and an ion conductor . The voltage of the electric current can be calculated using the Nernst equation . It depends on the type of metal ( electrochemical series ), the concentration in the solution of the respective half-cell and the temperature. In contrast to electrolysis , for example in electroplating , electrical energy can be obtained in the galvanic cell, while electrolysis requires electrical energy.

Whenever two different metals are in an electrolyte solution, a voltage (galvanic cell) is created. This is due to the tendency of the metals to go into solution and to form ions, the so-called solution tension . In addition to the Daniell element (copper / zinc), a galvanic element can also be created from copper and silver electrodes: The copper electrode is immersed in a copper sulfate solution, the silver electrode in silver nitrate solution, and these are connected by a wire (electron conductor) Voltmeter and an ion conductor . 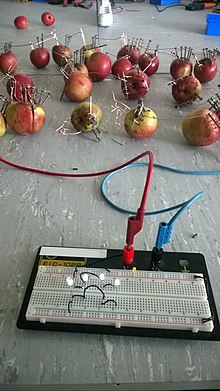 So silver ions are reduced to elemental silver at the silver electrode:

The silver electrode is therefore the cathode (electrode on which the reduction takes place) and the positive pole of the galvanic cell (since there is a lack of electrons here).

On the other hand, the following oxidation takes place on the copper electrode:

The copper electrode is the anode (electrode on which the oxidation takes place) and the negative pole of the galvanic cell (since there is an excess of electrons here).

A redox reaction takes place in the galvanic cell, the reaction parts of which, however, are spatially separated from one another.

If the two electrodes are now connected in an electrically conductive manner, a voltage is generated , but no current flows yet. The reason for this is that there is an excess of Cu 2+ ions in the copper sulfate solution and the solution has a strong positive charge, which prevents further copper atoms from being dissolved.

That is why the electrode spaces are connected to one another via an ion bridge (salt bridge) , which is necessary to close the circuit. The ion bridge is often a U-tube that is filled with an electrolyte and the ends of which are provided with a membrane or a diaphragm . The ion exchange takes place via the salt bridge in order to counteract the charging of the individual cells. Another possibility of separating the electrode spaces from one another is a selectively permeable (selected permeable) membrane, which also enables charge equalization. The salt ions (in this case nitrate ions) migrate via the ion bridge from the cathode to the anode, i.e. from the silver half-cell to the copper half-cell.

There are also galvanic cells with two identical half-cells, which differ in their concentration, these are called concentration elements .

The deflagrator is also a galvanic cell.

A galvanic cell is sometimes described in abbreviated form. The Daniell element shown graphically above would look like this in this notation:

Both half cells are separated in a galvanic cell by a diaphragm , i.e. a thin, semi-permeable membrane ( semipermeable membrane ). Almost exclusively the negatively charged anions are allowed to pass through this membrane . In the case of the Daniell element, these are SO 4 2− ions (sulfate ions), which are present in the salt solutions of both half-cells.

This diaphragm is represented in the abbreviated form by the double vertical line (||). To the right and left of this double line, the two half-cells of the galvanic cell and the reactions taking place in them are shown in abbreviated form. In addition, the concentration of the metal salt solution, i.e. the concentration of the dissolved metals in both half-cells, is given. The anode half-cell is usually on the left.