A redox reaction (actually reduction-oxidation reaction ) is a chemical reaction in which one reaction partner transfers electrons to another reaction partner. The partner known as the reducing agent (e.g. hydrogen ) releases electrons and is oxidized in the process . The partner known as the oxidizing agent (e.g. oxygen ) accepts the electrons and is thereby reduced . Redox reactions are of fundamental importance in chemistry: many metabolic and combustion processes , technical production processes and detection reactions are based on such electron transfer reactions.

Redox couple oxidation: Substance A releases an electron as a reducing agent.

Redox couple reduction: The electron is absorbed by oxidizing agent B.

Redox reaction: substance A releases an electron to substance B.

The oxidation numbers can be used to determine which substance is oxidized and which is reduced in a reaction .

One speaks of a disproportionation when, in a chemical reaction, elements with a medium oxidation state change into those with a lower and a higher one. These reactions often take place under the influence of a catalyst (a substance that accelerates a chemical reaction without changing).

The reaction of hydrogen with oxygen ( oxyhydrogen ), which produces water (H 2 O), is called the oxyhydrogen reaction . Every combustion represents a redox reaction. This also applies to the burning of petrol , diesel and kerosene in vehicles, ships and aircraft. Fuels that release a lot of energy can be used as rocket fuel . In pyrotechnics , oxidizing and reducing agents are also used for various fireworks effects. In the case of explosives , a sudden exothermic redox reaction occurs, in which gas is released, expands strongly due to the temperature and thus causes the explosive force.

If a metal atom reacts with an oxygen atom, the oxidation of the metal can be understood using the following reaction equations:

Redox reaction: Oxygen oxidizes the metal and is itself reduced in the process.

In this case, oxygen tends to build up a stable valence electron shell with a total of eight electrons by absorbing two electrons ( octet rule ). The metal, in turn, can dissolve partially occupied shells by releasing the electrons and thus reach the next lower stable electron configuration . If iron is oxidized, the rust that is familiar from everyday life is created . With active cathodic protection against corrosion , redox reactions are used.

The combustion of fossil fuels such as coal , crude oil and natural gas is used in thermal power plants to generate electrical energy. Numerous reactions from the field of metallurgy are classic examples of technically important redox reactions in industry. 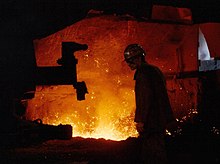 In the blast furnace process , iron is reduced with coke . One of the side reactions is the strong reducing agent carbon monoxide , which does not immediately react to carbon dioxide when there is a lack of oxygen in the furnace.

Energy-producing combustion of the coke.
2) 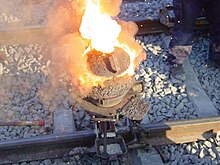 Aluminum can be used as a reducing agent in the manufacture of numerous metals from their oxides if the metals are more noble than aluminum. The process in which aluminum powder or chips are used is called the aluminothermic process . A mixture of iron oxide and aluminum is called thermite and is used, for example, to weld railroad tracks together and for incendiary bombs.

During the production of margarine , vegetable oils are catalytically hydrogenated ( fat hardening ).

The reddening of meat by curing salts is also a redox reaction. Stable complexes of bright red color (nitrosylmyoglobin and nitrosylmetmyoglobin) are formed.

Antioxidants are added to fatty foods in order to prevent oxidation damage to the product (and thus becoming rancid ). Instead, the added antioxidants are attacked oxidatively.

In the Haber-Bosch process , ammonia is produced from the elements nitrogen and hydrogen . Among other things, this is an important precursor product for the production of nitrogen fertilizers and thus of enormous importance for agriculture.

Many cell biological processes involve redox reactions. The coenzymes NAD , NADP and FAD , which transfer reducing agents in the form of hydride ions , are often involved . These reduction equivalents often serve to convert energy through substrate chain phosphorylation or oxidative phosphorylation in the form of GTP or ATP .

During cell respiration , glucose (grape sugar) is oxidized to carbon dioxide and oxygen is reduced to water. The simplified sum formula is:

The reverse reaction is photosynthesis , in which green plants from carbon dioxide and water - by supplying energy ( light ) - build up glucose and release oxygen. The gross reaction equation is:

Organisms like baker's yeast can convert sugar into drinking alcohol ( ethanol ) and carbon dioxide during alcoholic fermentation in order to generate energy.

Archaea from the group of methane producers can produce methane from carbon dioxide in the absence of oxygen . The process is called methanogenesis .

The electrochemistry is the branch of physical chemistry , which deals with the relationship between electrical and chemical processes. Therefore, when a redox reaction is forced or supplies an electrical current , this is an electrochemical process. The processes that are decisive for electrochemistry take place at the phase boundary . Electrochemistry is the science of the processes between an electron conductor ( electrode ) and an ion conductor ( electrolyte ). The Nernst equation , which describes the concentration dependence of the electrode potential, is of central importance . This can be used analytically with the help of redox titration to determine ions in solution. Theoretically, the transfer of external electrons in solution is described by the Marcus theory .

If the redox reaction is forced by an externally applied electrical voltage, this process is called electrolysis - if the chemical reaction of suitable substances produces a measurable voltage, a galvanic element is present. These voltages ( redox potentials ) are characteristic of the respective reactions and are documented on a scale, the electrochemical series . Here the strength of an oxidizing or reducing agent can be measured .