The physical chemistry (in short: PC or . Phys.Chem , including: physical chemistry ) in addition to the inorganic and organic chemistry of the "classical" branches of chemistry . It deals with the border area between physics and chemistry, in particular the application of methods of physics to objects of chemistry, which is why the term chemical physics is sometimes used. While preparative chemistry focuses on the methodology of the chemical synthesis of known and new substances, physical chemistry tries to describe the properties of substances and their transformation with the help of theoretical and experimental methods, with the aim of creating generally applicable mathematical processes for all relevant processes Set up formulas with clearly defined units and exact numerical values. 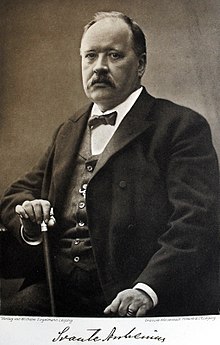 The first courses on subjects from physical chemistry were held around 1752 at the Lomonossow University in Moscow by Michail Lomonossow . In 1890, Svante Arrhenius , Jacobus Henricus van 't Hoff , Wilhelm Ostwald and Walther Nernst first introduced physical chemistry as an independent subject at universities. Josiah Willard Gibbs is considered the founder of physical chemistry in the Anglo-Saxon region with his article "On the Equilibrium of Heterogeneous Substances" published in 1867, in which he developed the basic concepts of free energy , chemical potential and phase rule . The work of Gibbs, Robert Mayer , Hermann Helmholtz , Jacobus Henricus van 't Hoff formed an important link between the concept of energy from a chemical point of view for Wilhelm Ostwald.

Wilhelm Ostwald founded the German Electrochemical Society in 1894 , which was renamed the German Bunsen Society for Applied Physical Chemistry in 1901 . In England, the Faraday Society (now the Faraday Division of the Royal Society of Chemistry ) was founded in 1903 . In the meantime, countless university and several Max Planck institutes are concerned with physical chemistry.

Physical chemistry is divided into different sub-areas in which different phenomena are examined. The most important are theoretical chemistry , thermodynamics , kinetics , spectroscopy and electrochemistry .

In theoretical chemistry one tries to predict the properties of single molecules or macroscopic amounts of substance with the help of mathematics or computer simulations and calculations. The quantum mechanics provides the basis for understanding the structure of matter and the chemical bond , while the statistical thermodynamics provides the interconnection with the macroscopic thermodynamics.

Chemical thermodynamics unified the energy terms of electrochemical work ( electromotive force ), thermal energy by increasing the temperature of a substance, work with gas expansion ( steam engine , combustion engine ) and heat energy with the conversion of substances ( enthalpy , e.g. combustion of coal or gasoline).

Chemical thermodynamics also enables statements to be made as to whether material conversions are possible, which energies develop or have to be added during a reaction, which substance concentrations are to be expected with regard to products for starting materials (starting materials) according to the law of mass action , whether an increase in temperature or pressure promotes or attenuates which redox potential or which ion concentrations of individual substances is to be expected.

Behavior of gases with changes in temperature, volume and pressure

When the temperature changes and the external pressure remains constant, the volume of a gas changes proportionally to the temperature change ( Gay-Lussac law ). When the temperature rises , the gas expands ; when it cools, it contracts. In the case of ideal gases, the volume is proportional to the absolute temperature ; This assumption is often a good approximation even for real gases . If a gas is compressed under high pressure, the temperature and internal energy of the gas rise. This internal energy of a gas can also give work by the gas expanding. This process was used, for example, to drive steam engines. If you expand a gas very quickly in a cylinder with a piston to a larger volume, the gas cools down. This process is used, for example, in refrigerators or air liquefaction systems .

In a steam engine, only a certain part of the thermal energy is converted into mechanical energy. The heat energy becomes work, but the total energy of a closed system does not change. The quotient of the share of thermal energy that is released unused into the environment during this process to the temperature is called entropy . The discharge of a gas into a vacuum is also associated with an increase in entropy; the process does not take place voluntarily in the opposite direction.

Chemical conversions of substances, changes in the physical state or the dissolution of salts or concentrated acids or bases in water are often associated with a heat release or absorption. Chemists used to believe that heat generation is the basis for chemical reactions between substances to occur. However, reactions in which cooling occurred were also found later. Scientists recognized that in the case of material conversions with a decrease in heat, the entropy for chemical processes had to play an important role.

Before the development of the Haber-Bosch process for the production of ammonia, it was known from thermodynamics that the formation of ammonia from hydrogen and nitrogen should be possible. For a long time, however, the formation failed, only with catalysts and under higher temperatures and pressure did the reaction proceed as desired. The pressure was necessary to compensate for the decrease in entropy; although a high temperature had a negative effect on the entropy, it was advantageous for the catalytic activation.

A particularly important law, the van 't Hoff equation , describes the change in equilibrium as a function of the change in temperature. Also, solubility of inorganic and organic salts in water and other liquids can be produced from the free reaction and calculate the law of mass action. In redox reactions , the Nernst equation provides a way of calculating the concentrations of ions or the electromotive potentials (for example of potassium permanganate in acidic, neutral and basic solutions).

Spectroscopy is a collective term for a class of experimental procedures that investigate how a sample can absorb or release energy in the form of electromagnetic radiation (radio waves, microwaves, infrared, visible light, UV, X-rays). The aim of spectroscopy is to draw conclusions about the sample from the spectrum obtained, for example about its internal structure ( intermolecular force ), material composition or dynamics.

The Electrochemistry deals with the properties of charged particles, especially ions and the effect of electric current on fabrics. The most important areas of investigation in electrochemistry are the processes in mostly aqueous solutions of ions, electrolytes and on electrodes . The interaction of these processes is crucial in display and refining electrolysis, corrosion processes and the field of electricity storage in batteries and accumulators . Other technically important applications of electrochemistry are fuel cells and the deposition of metals on surfaces in electroplating .

Relevance in technology and in everyday life

Physical chemistry deals with many objects that have great application potential or are of crucial importance for the quality of life of mankind.