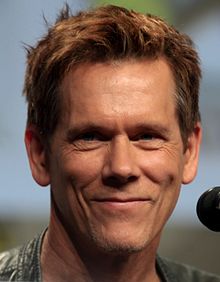 Kevin Norwood Bacon (born July 8, 1958 in Philadelphia ) is an American actor , director and producer as well as musician and, among other things, Golden Globe prize winner.

After graduating from the Julia Reynolds Masterman Laboratory , Bacon left Philadelphia, Philadelphia, in 1975 and moved to New York City to become an actor. After a short basic training at various academies, he first appeared on stage at the age of seventeen in the Circle In the Square Theater , which he left at the age of 18. In 1978 he made his screen debut in the comedy I believe a horse kicks me .

After appearing in Friday the 13th , American Diner and the Broadway -Stück Slab Boys (with Sean Penn ) Bacon succeeded with the dance movie Footloose 1984 breakthrough.

The Big Picture was a failure, but Bacon's work was discovered by Ron Underwood , with whom he made Tremors (1990). After the success of this blockbuster , Bacon got a lot of film offers: Flatliners , Born in Queens , typical! , JFK - Dallas and Pirates Crime Scene .

In the following years, Bacon played mainly theater on various New York stages and roles in smaller film productions to counteract his image as a teenage idol.

In 1992, Oliver Stone made him a comeback by casting him for his political thriller JFK - Tatort Dallas . The rather minor role of a homosexual witness in the Garrison trial earned Bacon a lot of critical acclaim and a reputation for being an excellent character actor.

With A Matter of Honor , Apollo 13 , Sleepers and Hollow Man - Invisible Danger , he was able to record further successes. In 1996 he made his directorial debut with Losing Chase , for which he received three Golden Globe nominations. In 2003 he starred in Clint Eastwood's critically acclaimed drama Mystic River , and a year later he took on the role of a released pedophile in The Woodsman . In 2009, he starred in the true-event televised film Taking Chance . For the role of Lieutenant Colonel bringing the body of a US soldier from Iraq to his family, he received his first Emmy nomination in 2009 and the Golden Globe and Screen Actors Guild Award in 2010 .

Bacon is also active as a musician. Together with his brother Michael he plays in the band The Bacon Brothers , with whom he has already released six albums and a live CD and DVD.

Bacon lives in New York City with his wife, actress Kyra Sedgwick , and their children. They met in 1987 during the TV production Lemon Sky and have been married since 1988. Both children (Travis and Sosie Bacon ) are also actors and musicians. Bacon's nephew is singer Justin Nozuka .

Together with his brother Michael Bacon in the band The Bacon Brothers :

In addition, Bacon was nominated for numerous other awards, which he did not win.