This article is about the US state. For additional meanings, see Pennsylvania (disambiguation) .

The name literally means "Woodland of Penn" (from Latin silva "forest"). Pennsylvania is nicknamed Keystone State ( keystone state, after the central wedge-shaped stone in the middle of an arch).

The highest point of the state is at 979  meters above sea level of Mount Davis , which was named after its owner, a teacher who on the part of the Union in the Battle of Gettysburg fought. Pennsylvania’s lowest point is at sea level on the Delaware River . The average height is 336 m.

The main river through the country is called the Susquehanna River . Pennsylvania is characterized by deciduous forests and rolling hills. In the east of the country you can find the low mountain range of the Appalachians .

In the south of the state is the archaeologically interesting site of Meadowcroft .

The age structure of Pennsylvania is composed as follows:

German-speaking immigrants, Pennsylvania Dutch , among them Mennonites and Amish , settled mainly in the south, particularly in Lancaster County , down. Germantown was founded in 1683 . Berks County was mostly populated by Protestant Germans in the 18th century. 30,000 immigrants from 1727 to 1776 are published by name with details of the names of the ships, the place of embarkation and the date of arrival in Philadelphia.

The map shows the parish division of Pennsylvania

The religious communities with the largest number of members in 2000 were the Catholic Church with 3,802,524, the United Methodist Church with 659,350 and the Evangelical Lutheran Church in America with 611,913 followers.

Pennsylvania does not officially have an official language. However, mainly the English language and partly also the German language are officially used.

Stone blades from the Bridge Valley, 1893

Pennsylvania was originally the settlement area of ​​the Susquehannock, exterminated by the Iroquois and European colonists . In 1643 the first settlers from Sweden settled. It later came under the control of England .

From 1671 onwards, William Penn traveled to many European countries and promoted the Quaker colonies in the New World. The greatest immigration of Quakers began in 1681, when Charles II of England gave the Quakers a large area of ​​land on the then western border of the populated areas and appointed Penn governor of the area later known as Pennsylvania. The "sacred experiment," as Penn called it, was the only Quaker state ever to exist. From the beginning there was full religious freedom in him .

In 1774 and 1775 the Continental Congress met in Philadelphia , where on July 4, 1776 the Declaration of Independence was signed in Independence Hall (then Pennsylvania State House ). This deprived the Penn family of all privileges in the sense of Benjamin Franklin . In 1787, the United States Constitution , which is still in force today, was ratified in Philadelphia during the Constitutional Convention known as the Philadelphia Convention . After Delaware , Pennsylvania was the second state to approve the constitution, making it one of the 13 founding states of the union. From 1790 to 1800 Philadelphia was the second capital of the USA after New York . During the Civil War (1861-1865) Pennsylvania sided with the Northern states . Approx. 350,000 Pennsylvanians served in the Union Army alongside approximately 8,600 African American volunteers.

From July 1-3, 1863, one of the most important events in American history took place on the soil of Pennsylvania. In the Battle of Gettysburg, the Northern States triumphed over the Southern States. The battle is one of the crucial turning points of the American Civil War. The drilling for oil that Edwin L. Drake carried out on August 27, 1859 at Oil Creek in Titusville became world famous . This triggered an oil boom in the region, similar to the gold rush . Numerous people were drawn to the region. Since then, the USA has been one of the largest oil producers in the world.

On March 28, 1979 , a meltdown occurred at the Three Mile Island nuclear power plant near the city of Harrisburg . On September 11, 2001 , four American planes were hijacked and used for terrorist attacks. Two were crashed in New York City and one in Washington, DC . The fourth plane, which was likely to hit a government building in Washington, DC, was crashed by one of the hijackers in Shanksville , Pennsylvania because he was involved in fighting with passengers. In 2005 a nationally sensational trial took place in Dover, Pennsylvania : the Kitzmiller vrs trial. Dover Area School District . Here the United States District Court for the Middle District of Pennsylvania ruled that intelligent design is not a science and should therefore not be taught in schools as an alternative to the theory of evolution .

Pennsylvania is a deeply divided state politically and socially. While the west is traditionally characterized by the steel industry and mining around Pittsburgh , the hill country of the outgoing Appalachians is characterized by small towns and farmland, in which the Quaker , Presbyterian and Amish churches often still form the centers of society. This area can be compared to the Bible Belt . To the east lies Philadelphia, a major city that, like Pittsburgh, was hit hard by the shipyard, steel and automobile crisis in the 1970s and 1980s. In the meantime, both cities have recovered economically from these crises, but less so the small towns, so that the state is included in the Rust Belt . A number of affluent suburbs are located around Philadelphia, which is also home to numerous African Americans and Hispanics. These conditions in Pennsylvania, which James Carville once described as “Philadelphia and Pittsburgh with Alabama in between”, make it a highly competitive state in presidential elections, as both parties can justifiably hope for the 21 electoral votes through the presence of their traditional constituencies to be able to book for yourself.

Pennsylvania has elected democratically since 1992 and seemed to evolve from swing state to blue state . In 2006 it voted out the controversial Conservative US Senator Rick Santorum from the Republican Party in favor of Democrat Bob Casey ; the second Republican in the Senate, Arlen Specter , who had been a member of the judiciary committee for years, has always been considered one of the most moderate Republicans ever. In April 2009 he finally changed parliamentary groups and became a democrat. However, the elections in 2010 brought a turnaround towards the Republicans, who were elected Governor Tom Corbett until he was voted out on January 20, 2015 and who are again represented in the Senate by Pat Toomey . He took over from Arlen Specter in January 2011. The Democrat Tom Wolf has been the state governor since January 20, 2015. The Pennsylvania delegation to the House of Representatives of the 112th Congress consists of twelve Republicans and seven Democrats; in the previous legislative period the relationship was exactly the opposite. In the 113th Congress , the Republicans have a 13: 5 majority. 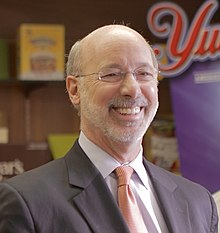 Tom Wolf , the Governor of Pennsylvania

The governor of the state has been the Democrat Tom Wolf since January 20, 2015 .

The governor exercises executive power at the state level, that is, he leads the state government and determines the guidelines of the policy. He has the right to pardons , appoints senior civil servants and judges to the state constitutional court, and plays a central role in lawmaking by signing or vetoing bills. He is also commander in chief of the Pennsylvania National Guard and represents the state externally. The governor is elected directly by the population every four years .

Other important members of the executive are the lieutenant governor , the attorney general , the secretary of state and the state treasurer (roughly equivalent to a finance minister).

Pennsylvania State Capitol in the capital Harrisburg , where the legislature meets

The legislature consists of a bicameral parliament , a house of representatives and a senate . The House of Representatives consists of 203 members (MPs) elected by the people for two years, while the Senate consists of 50 members (senators) who are elected for four years. Half of the senators are elected every two years. Both state senators and MPs represent a constituency in parliament. Republicans currently have a majority in both houses. It is a full-time parliament.

Representation in the US Congress

It is well known Groundhog Day (Groundhog Day), which is always celebrated in different places of the United States and Canada on February 2. According to tradition, the marmot (more precisely: the woodchuck , English groundhog ), which is taken from its burrow, predicts the weather. If it sees its shadow (or its shadow can be seen), another six weeks of winter can be expected. If it does not see its shadow (or its shadow cannot be seen), early spring is expected. (See also the film: Groundhog greets every day ).

The economic output of Pennsylvania in the year 2016 was 724 billion USD making it the sixth highest economic output of the states of the USA and a share of 3.93% of the total American economy. Counted as a separate country, Pennsylvania's economic output would be roughly the same as that of the Netherlands . The real gross domestic product per capita (GDP) in 2016 was USD 56,625 (national average of the 50 US states: USD 57,118; national ranking: 21). The unemployment rate was 4.6% in November 2017 (national average: 4.1%).

Counties in the US state of Pennsylvania