Classification of the Appalachians according to the USGS

The Appalachians ( English Appalachian Mountains ) are a forested mountain system in eastern North America , which extends over a length of 2400 kilometers from the Long Range Mountains on the west coast of the Canadian island of Newfoundland to the north of the US state of Alabama extends. Although their highest peak is more than 2000 meters high, the Appalachians have a low mountain character both in terms of their height and their morphology . Only a few mountains rise above 1200 m and many mountain peaks remain well below 800 m.

The Appalachians limit the North American craton ( Laurentia ) or the North American platform to the southeast. They are thus a kind of morphological counterpart to the North American Cordillera , which limits the craton to the west. The geological history of the Appalachians, however, differs significantly from that of the western mountains of North America. Their fold belts are much older and were originally related to similarly old fold belts in north-west Africa as well as western and central Europe, some of which now also appear in the form of mountainous countries (e.g. the Anti-Atlas in Morocco and the Massif Central in France) (see below ) . As a result of continental drift and the resulting breakup of the North Atlantic , the folds of the Appalachian belts were separated from those of Western Europe and Northwest Africa. This also led to the emergence of the coastal lowlands, which join the Appalachians to the southeast and east. There are rocks with "Appalachian" folds deep underground, overlaid by sediments from more recent geological epochs.

With their foothills, the Appalachian Mountains stretch from Mississippi to Canada ( Newfoundland's Long Range Mountains ). The special geographic constellation with the Appalachian Mountains in the east and the North American Cordillera in the west enables polar, cold air masses from the north, moving south from Hudson Bay, to meet tropical, very warm, humid air masses in the American Midwest moving north from the Gulf of Mexico . In such weather conditions, severe thunderstorms and even tornadoes form , sometimes with catastrophic effects, which is why the corresponding region is also known as Tornado Alley . 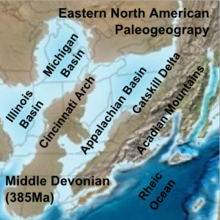 The folded and stacked rock complexes of the Appalachians, which consist to a not inconsiderable part of marine sedimentary rocks , represent the North American part of an ancient chain of mountains that is geologically older than the Atlantic . It extended in the late Carboniferous around 300 million years ago across what was then the ancient continent of Pangea and is known as the Hercynian system . The corresponding mountain formation is called Alleghenian orogeny and is the counterpart of Variscan orogeny in Western and Central Europe . Today's North America began to detach itself from Northwest Africa around 200 million years ago, in the late Triassic , so that the now heavily eroded Hercynian system was torn apart. Its rocks can be found east of the Atlantic in the Anti-Atlas in Morocco , in the Iberian Meseta in Spain, in the Massif Central in France and in the Rhenish and Bohemian Massif in Central Europe.

In the Appalachians, however, there are also fold complexes that arose before the Alleghenian orogeny and can also be traced across the Atlantic, including to the Grampian Mountains in Scotland . They are assigned to the Taconian orogeny ( Ordovician , approx. 440 million years ago) and Acadian orogeny ( Devonian , approx. 400 million years ago). The geological history of the Appalachians therefore goes back well into the Old Paleozoic and includes the closure of at least two ocean basins.

In contrast to the mountains of the young chain mountains such as the Himalayas , the Rocky Mountains and the Alps , today's relief of the Appalachians was not created as a result of plate tectonic convergence , but rather by simply lifting part of the old mountain block from the underground in the Middle Miocene , around 15 Millions of years. The relief was partially reversed in that the old foreland basin was also lifted out and today, in the form of the Appalachian Plateau, sometimes forms higher mountains than the old folded mountain hull (for example with the approx. 1450 meter high Mount Porte Crayon in West Virginia). Since the beginning of the opening of the Atlantic, at least two “Ur-Appalachian Mountains” have been excavated and removed again, one in the Middle Jurassic and one in the Early Cretaceous .

Structure from west to east

In the west of the Appalachian Mountains lie the Allegheny Plateau and the Cumberland Plateau .

The highest mountains in the Appalachian Mountains in the American states and Canadian provinces as well as territories with a proportion of these mountains are listed below, sorted in descending order by height:

Historically, the Appalachians were the first hurdle for the first immigrants on their way west. In 1763, at the end of the Seven Years' War , Great Britain established the main ridge of the Appalachians as a border of white settlement as a gesture for the Indian peoples allied with it. The Royal proclamation 1763 stated that the relationship between British settlers and Indians henceforth by separation ( segregation ) and not through interaction ( interaction should be determined). However, this was already broken in the 1770s by the settlement of Kentucky under the direction of Daniel Boone . The later General and 1st President of the USA , George Washington , worked as a geometer in their surveying development .

There are large deposits of hard coal in the Appalachian Mountains . These are dismantled using Mountaintop Removal Mining . First of all, the hilltops under which the coal stands are blasted and removed, then the coal is extracted in the open pit . In total, around 500 mountain peaks were removed over an area of ​​5700 square kilometers in the Appalachian Mountains, the landscape being seriously changed and long-term impacted by mining residues.

The first connection through the Appalachians was the Wilderness Road through the Cumberland Gap . The first modern road was the National Road from Cumberland, Maryland, to Vandalia, Illinois, completed in 1839 .

The first rail line through the Appalachians was built by the Baltimore and Ohio Railroad . In 1853 it connected Baltimore with the Ohio in Wheeling (West Virginia) . In 1854 the Pittsburgh – Harrisburg (–Philadelphia) line of the Pennsylvania Railroad was closed.

By 1857, the Norfolk and Western Railway pierced the Appalachian Mountains in the New River Valley and the Southern Railway near Asheville, North Carolina. In 1873 the Chesapeake and Ohio Railway connected Richmond to Huntington (West Virginia) via Staunton .

The Appalachians offer good hiking and touring opportunities, including:

The Americans living in the Appalachian Mountains have developed their own identity and are called English mountain people (or mountainmen ) in the USA . Characteristic of the mountain people is their own dialect, their own music, their own self-confidence and low income.