The title of this article is ambiguous. See Connecticut (disambiguation) for additional meanings .

Connecticut ( English Connecticut ? / I [ kəˈnetɪkət ]) is a state in the northeastern United States and part of the New England region . Connecticut was one of thirteen colonies that rebelled against the Kingdom of Great Britain during the American Revolutionary War . The name arose from the French corruption of the Mohegan word quinnehtukqut , which means "long river (of the tides)".

The state is officially called The Constitution State , which was adopted by law in 1959, and is also called the Provision State . This name comes from the fact that during the American Revolutionary War the Continental Army was supplied with provisions from Connecticut; the state hardly saw any fighting on its own territory.

Connecticut, the third smallest state in the United States, is located in the northeastern United States on the Atlantic Ocean . The state extends over 177 km between 40 ° 58'N and 42 ° 3'N and 113 km between 71 ° 47'W and 73 ° 44'W. Connecticut is bordered by Massachusetts to the north, Rhode Island to the east, Long Island Sound to the south, and New York to the west . The state is traversed by the largest river in New England : the Connecticut River . 1,809 km² (12.6 percent) of the land is covered by water, and 56 to 63 percent of the land is forested, otherwise hills, lakes and plains (including the 16 km wide coastal plain) characterize the country. Part of the Appalachian Mountains forms the highest peaks ( Mount Frissell 725 m) in the state.

The Connecticut flag is blue, reminiscent of the uniform color of the state's militia. In the middle is the Connecticut seal on a coat of arms. On it are three vines, each with three red grape panicles. It is also believed that the three panicles are supposed to represent the three colonies of New Haven, Saybrook and Hartford. At the bottom of the banner is Qui Transtulit Sustinet, which means something like “He who brought over exists”. Some interpretations of this motto refer to the Bible ( Psalm 80,9  EU ): “ Vineam de Aegypto transtulisti, eiecisti gentes et plantasti eam ” and translate more freely: “Whoever transplanted will survive”. The seal was formerly the seal of the Saybrook Colony and was passed on to the Connecticut Colony when Colonel George Fenwick brought it from England in 1639.

The Dutch Adriaen Block was the first European to come to Connecticut in 1614 . At that time there were 16 Algonquin Indian tribes with 6,000–7,000 people.

The first Englishmen came to the country from Massachusetts in 1633 . Two years later the settlements of Windsor and Wethersfield were established. Thomas Hooker founded Hartford in 1636 . The three settlements merged to form Connecticut in 1639. In the same year the New Haven colony was established. In 1662 Connecticut was granted autonomy, approved by King Charles II , and its own constitution. In 1665 Connecticut and New Haven merged.

The planning of a merger with the Dominion of New England took place in 1685. Two years later, King James II wanted to revoke the constitution of 1662. After the fall of King James II in 1688, Connecticut was able to regain autonomy in July 1689.

Connecticut declared independence from Great Britain as one of the Thirteen Colonies in July 1776 and became the fifth state of the United States on January 9, 1788 . The slavery was abolished 1848th

Connecticut has 3,574,097 inhabitants (as of the 2010 US Census), of which 71.2 percent are white (excluding Hispanics and Latinos), 13.4 percent Hispanics or Latinos , 10.1 percent are black or African-American , and 3.8 percent are Asian-Americans and 0.3 percent Indians . 322,941 residents (9.0 percent of the total population) stated in the American Community Survey in 2014 that they had German ancestors .

The Connecticut people are believed to be the original embodiment of the Yankee .

The religious communities with the largest number of members in 2000 were the Roman Catholic Church in the United States with 1,372,562, the United Church of Christ with 124,770 and the Anglican Episcopal Church with 73,550. Jewish communities had 108,280 members.

Connecticut has moved closer and closer to the Democratic Party in presidential elections since the 1990s . After Republican dominance during the 1970s and 1980s, the Democrats have clearly won Connecticut and its eight (seven since 2004) electors since the 1992 election. Connecticut is now one of the strongest democratic strongholds in the United States. The first setback that the Connecticut Democrats have suffered since then was the victory of former Democrat and now independent candidate Joe Lieberman in the 2006 Senate election. After Lieberman's decision not to run again in 2012, the seat with Chris Murphy fell back to a Democrat . The second state senator has been the Democrat Richard Blumenthal since 2011 . All five Connecticut seats in the US House of Representatives have been occupied by Democrats since 2009.

Since 2019, the Democrat Ned Lamont has been the successor of his party colleague Dan Malloy, Governor of Connecticut.

On April 25, 2012, Connecticut abolished the death penalty and replaced it with life without the option of dismissal as the new maximum penalty.

There are also eight National Natural Landmarks in Connecticut as of September 30, 2017. 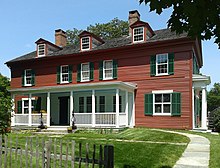 The NPS designates a National Historic Site and a National Heritage Area for Connecticut :

Connecticut also has 63 National Historic Landmarks and 1,615 structures and sites on the National Register of Historic Places as of September 30, 2017.

The real gross domestic product per capita (English "per capita real GDP") was 73,643 USD in 2016 (national average of the 50 US states: 57,118; national ranking: 4). Connecticut is one of the wealthiest states with one of the highest standards of living and education.

The main crops grown in Connecticut are cereals , potatoes , tobacco , corn and oats . Ordinary animal husbandry is practiced in the state.

Connecticut is a very industrial state, manufacturing aircraft engines , machines , metal goods , textiles , nuclear submarines and chemical products , among other things . It is said that the Frisbee was also invented there.

Counties in the US state of Connecticut