The title of this article is ambiguous. Further meanings are listed under Maryland (disambiguation) .

Maryland ( English pronunciation  [ mɛɹɪlənd ] ) is a state of the United States on the Atlantic coast .

Its capital has been Annapolis since 1694 (approx. 40,000 inhabitants in 2016, US Census Bureau ). With a population of over 610,000, Baltimore is the largest city. Maryland is known as the Old Line State, Free State, and Chesapeake Bay State . 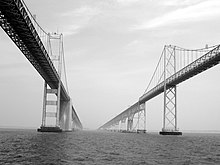 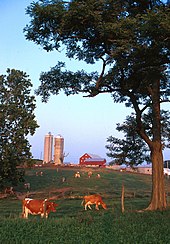 Maryland is in the middle of the east coast. It is bordered to the southwest by Virginia and Washington, DC , to the west by West Virginia , to the north by Pennsylvania, and to the northeast by Delaware . The Chesapeake Bay , which cuts deep into the country, is home to important ports such as Baltimore and Annapolis, where the US Naval Academy is located. For a long time the bay was one of the most productive fishing grounds in the world, but overfishing and water pollution have made the legendary oyster beds almost completely disappear. In the relatively small state, the extremes are close together: here the metropolis of Baltimore, there the remote hills of the Appalachian Mountains and on the coast tranquil fishing villages. In general, the state has a peculiar shape: the narrowest part of the state is at Hancock . The borders with Pennsylvania in the north and West Virginia in the south are less than three kilometers apart - making this the narrowest point of a state in the United States. With a population density of 209 inhabitants per square kilometer based on the land area (comparable to Rhineland-Palatinate ), Maryland is one of the most densely populated US states. In addition to the metropolis of Baltimore, about half of the extensive metropolitan area of ​​Washington, DC also belongs to Maryland.

Climate and the effects of climate change

According to the effective climate classification , the climate in Maryland can be described as the east side climate : There are hot, humid summers, cool winters and year-round rainfall. In the Chesapeake Bay , the spring and summer temperatures are more moderate than in the interior, as in Washington, DC

The effects of climate change have been reviewed by Hino et al. (2019) examined as an example for Annapolis : Due to the overheating of the earth's climate system, the number of tidal flood events in Annapolis increases over time. In 2017 alone, Annapolis recorded 63 such events. The economic damage is considerable. The passage of seawater over the coastal fortifications in the year mentioned cost the owners of shops, cafés or restaurants between 86,000 and 172,000 US dollars per shop due to the lack of customers.

Lord Baltimore , who received a cultivation license for the land in 1632 , named the area after Queen Henrietta Maria , wife of King Charles I of England , who enacted the Charter for the Foundation of Maryland that same year .

On March 25, 1634, the first settlers settled in the area. The Province of Maryland was the only Catholic among the otherwise strictly Protestant British colonies in North America. The first Catholic diocese and the first Catholic cathedral in the USA were built here. In the 17th century there were repeated clashes between Catholics, Anglicans and Puritans in the colony. The Maryland Tolerance Act of 1649 was one of the first laws to explicitly tolerate other (Christian) denominations and is therefore considered to be the forerunner of the 1st Amendment . In 1657 it was reinstated after renewed violent conflicts. However, after the Glorious Revolution in 1689, the practice of the Catholic faith was banned, which was not to change until the independence of the United States. Many Catholics continued to practice their faith in secret.

The Mason-Dixon Line , also the border between Pennsylvania and Maryland, was drawn in the 1760s to settle disputes between the Penn and Calvert families. Originally, the royal charter - due to an incorrect map - granted Maryland the territory north of the Potomac River up to the 40th parallel, which would have made Philadelphia , the largest city in Pennsylvania, part of Maryland. Thereupon the ruling families of Maryland and Pennsylvania, Calvert and Penn, commissioned the surveyors Charles Mason and Jeremiah Dixon to measure a new valid boundary. The line later named after them has also become the traditional and often cited border between the so-called northern and southern states .

In 1774 the Assembly of Freemen declared itself the legislature of the colony. With the Maryland Constitution of 1776 Maryland finally renounced Great Britain . Thomas Johnson became Maryland's first elected governor in 1777.

The US capital Washington, DC was established in a district separated from Maryland for this purpose. In the War of 1812 Maryland theater of war was in vain sought to win the colonies when the British access. British troops failed in the destruction of the shipyard and the capture of the city of Baltimore due to persistent resistance from a port fortification. The fierce battle inspired the eyewitness Francis Scott Key to write The Star-Spangled Banner , which became the text of the American national anthem .

During the Civil War , Maryland remained largely neutral. The state allowed slavery, but this played a far less important role economically than in the states of the " deep south ", and Maryland was not one of the states that separated from the Union as the Confederate States of America . On April 19, 1861, a week after the start of the Civil War, armed clashes broke out in Baltimore between sympathizers of the Southern States and members of the Massachusetts Militia en route to Washington to serve in the Union Army. The clashes, which cost lives on both sides, went down in history as the Baltimore Riot of 1861 (or Pratt Street Riot or Pratt Street Massacre ). Maryland was the scene of several battles: the Battle of Antietam took place there on September 17, 1862, and the Battle of Monocacy on July 9, 1864 . When it became clear that it would not break away from the Union as a result of the precautions taken by the north, Maryland was not included in the emancipation proclamation . The slavery was abolished in 1864 with its new constitution.

At the end of the 19th century, industrialization arrived in the east coast state , and numerous immigrants from Europe settled here. The city of Baltimore became a center of German-born Americans , later many Afro -Americans came as a result of the Great Migration .

Senators Chris Van Hollen (Democrats, since 2017) and his colleague Ben Cardin (Democrats, since January 2007), who replaced Paul Sarbanes , represent the interests of Maryland in the Senate in Washington . In the 114th Congress House of Representatives, the state delegation consists of seven Democrats and Andrew P. Harris as the only Republican.

In terms of presidential elections, Maryland can be called the Blue State , which has only been won by Republicans in 1972, 1980 and 1984 since John F. Kennedy's election in 1960. The high percentage of the African-American population in Maryland is a major contributing factor. This has been one of the main Democratic voters' groups since the late 1960s. In the Electoral College Maryland since 1964 provides ten electors.

On May 14, 2008, the Maryland government decided to dedicate the first Friday after Thanksgiving to the Indians in the state. 121,000 Indians, most of them immigrated from other states, lived in Maryland at the time. The majority had long withheld their identity because, on the one hand, no tribe had received official recognition and, on the other hand, they feared being discriminated against like the former slaves.

As the 18th state in the United States, Maryland passed a law abolishing the death penalty on March 15, 2013 by 82 votes to 56. The punishment had been suspended since 2006 following a court ruling. This ended a 375-year era; the death penalty was introduced in 1638 under British colonial rule.

Baltimore is Maryland's most populous city 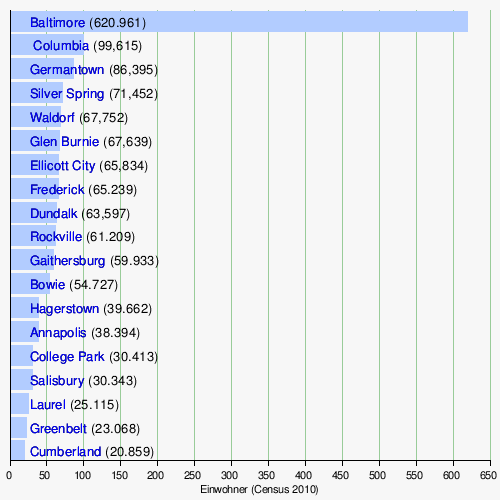 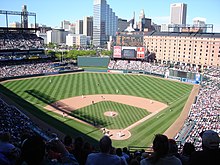 Oriole Park is the stadium of the Baltimore Orioles

The American football team of the Baltimore Ravens , which was founded in 1996 and has played its home games in the NFL since 1998 in the 71,008-seat M&T Bank Stadium, plays in Baltimore . The baseball team of the Baltimore Orioles , which is playing in the MLB , was founded in Milwaukee in 1894 , has played in Baltimore since 1954 and has won the World Series title three times. With 91,704 seats, the FedExField in Landover, which opened in 1997, is the largest stadium in the NFL; it serves as the home ground for the Washington Redskins . In Rockville , the third-rate professional football club Real Maryland Monarchs plays its home games in the USL Second Division . Crystal Palace Baltimore , which is affiliated with the English club Crystal Palace, also plays in this league .

The most important state universities are grouped together in the University System of Maryland with headquarters in College Park . The US Navy's military academy, the United States Naval Academy , is one of the most recognized American universities with the aim of achieving a bachelor's degree. The best known private university is the Johns Hopkins University . Additional colleges can be found on the Maryland List of Universities .

Counties in the US state of Maryland