Poultry is the generic term for all bird species that are bred as farm animals or domestic animals and are suitable for human consumption. Sometimes the term is synonymous with domestic uses or poultry, sometimes it also includes game birds , game birds that are specifically hunted for human consumption, with a. Depending on how birds are also in commercial poultry , fancy fowl and ornamental poultry or fat poultry , lean poultry and wild fowl distinguished.

Chicken farm with ducks, pigeons, chicks, chickens and rooster on a painting by Otto Scheuerer (1862–1934)

Zoological order of the poultry

Most poultry species belong to the hen or goose birds and thus to the large group of Galloanserae . Depending on the system, pigeons are also included. 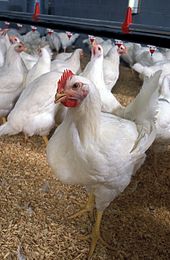 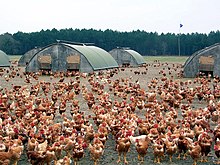 The turkey is usually a turkey , in Switzerland as Trute referred.

The poultry production takes place mainly for the production of animal protein in the form of meat and eggs (rarely especially chicken, and quail and ostrich eggs). The feathers of some species (goose down, peacock feathers, ostrich feathers) are also used, and leather is also used in ostriches. Chicken eggs are also used to obtain vaccines .

Poultry meat is low in fat in muscle tissue and, like other meats , contains protein , vitamins and minerals . Because of the frequent contamination by Salmonella and Campylobacter , poultry meat should always be cooked through and cross-contamination avoided during processing .

Since most bird species hardly differ in terms of their anatomy, the subdivision or cutting of poultry of all species is largely the same. 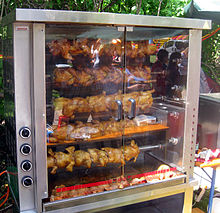 Roast chicken on a May Festival