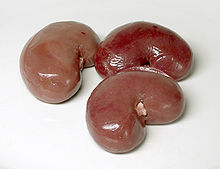 Raw kidneys from the lamb

Offal is the collective term in kitchen language for the edible internal organs of slaughtered animals , game and poultry . The most important offal are heart , liver , kidneys , tongue , stomach , sweetbreads (less commonly lamb sweetbreads ), tripe , brain , udder and lungs . In Bavaria and Austria the diaphragm is also offered as " crown meat ". In some countries the testicles are eaten by various animals, most notably bulls and lambs. In a broader sense, the innards also include the marrow and blood . Offal is rich in vitamins and nutrients , but easily perishable raw. They are part of many classic dishes and various sausages , e.g. B. of liver sausage and blood sausage ; the French sausages andouille and andouillette consist exclusively of offal.

Traditionally, after animals were slaughtered, all usable parts were processed and eaten in some way - and not just in poor households. Some of the things that are no longer considered edible used to be a delicacy. Since innards were generally considered to be less valuable and nutritious than muscle meat, they were often given away in soup kitchens for the poor, which in the course of time made them appear as typical poor food. Against this background, people who were dependent on a diet with offal were disparagingly referred to as tripe swallowers since the late Middle Ages .

Today offal is rarely used in the kitchen in Germany (with the exception of Bavaria, Baden-Württemberg and Rhineland-Palatinate), England and especially in the United States. The rejection is not equally strong against all innards; something that is strongly rejected by large sections of the population can also be viewed as a delicacy by a minority, for example sweetbreads . In the United States, offal is particularly avoided and is almost a food taboo.

The majority of the offal is now processed in the food industry, especially in sausage production. Direct consumption in Germany fell by over 70 percent between 1985 and 2003, from 2.1 kg to 600 g per year and person, while meat consumption in the same period only showed a decrease from around 66 kg to 61 kg.