The term parry is used in several contexts, including in the field of combat , martial arts , sport and rhetoric . In general, "parry" is usually understood as a defense and / or counterattack or reaction to an impact from another side.

It is also a technical term in kitchen language . 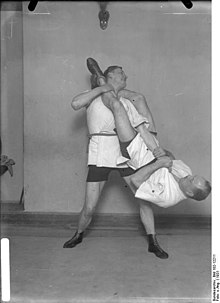 Parrying an attack in Jiu Jitsu with a neck grip

The term parry is widely used in the field of sport, especially in sports with a combat or competitive character, such as in martial arts and team sports . Often successful Parry is a parade called.

In martial arts , such as Chinese Shaolin Kung Fu and Japanese Karate , parrying is understood as a defense against an enemy attack.

The defense of the opponent's blows with a shield or an edged weapon in sword fighting or fencing is also known as parrying .

When riding, parrying is a gathering aid or an aid that slows down the gait . The rein is shortened while driving the thighs and cross-tightening and then immediately yielded. A distinction is made between half parades and whole parades. Whole parades lead to a halt. Half parades are carried out differently depending on the purpose (see table).

Parrying through (to trot, step or stop) is called parrying, which leads to a change to a lower gait or to stopping.

The parade should take place with as little force as possible in the horse's sensitive mouth and only for a short moment. A one-sided parry can only be given without disturbing the horse if the hind leg is about to swing forward on the parry side and before it touches the ground. This means that a parade can only be given if the rider's thigh is floating on the same side.

To be distinguished from the parade are the persevering rein and the keeping rein aid.

In the high school lesson school parade , which was only rediscovered in 2011 and has been lost for many decades , the horse is assembled to the maximum even while standing.

The Parry referred to in the kitchen language processing pieces of meat to them from tendons , skins (connective tissue) and fat to release before they are cooked. Any resultant Parüren are often used for the production of funds and sauces used.