The title of this article is ambiguous. Further meanings are listed under Burgstein (disambiguation) . 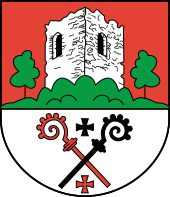 Coat of arms of the former municipality of Burgstein

Burgstein was a municipality in the Vogtlandkreis in Saxony . In 1994 it was formed from the places Geilsdorf , Großzöbern , Gutenfürst , Heinersgrün , Kemnitz , Krebes and Schwand with their respective districts. In 1999 Dröda was incorporated. On January 1, 2011, it was incorporated into the neighboring community of Weischlitz , with all the districts , with which the Weischlitz administrative community had previously existed.

Burgstein is about 12 kilometers southwest of Plauen and about 13 kilometers northeast of Hof . The north of the municipality is crossed by the upper reaches of the White Elster .

The castle stone, after which the community is named, is one of the typical elevations of the Vogtland hilltop land. It consists of a volcanic Paläobasalt breccia of Upper Devonian ( Erdaltzeit ) and is 546  m above sea level. NN high. The ruins of two late medieval churches standing close together have been preserved there. The hiking area around the Burgstein is a landscape protection area and parts of it are located in the Green Belt , the former border protection strip of the GDR.

The district of Kemnitz

The following districts belonged to Burgstein:

Castle stone ruins in the western hallways of Ruderitz

Located in the west of the Vogtland, the places around the Burgstein were owned by the von Sack family from the Vogtland in the 14th century . There is archival evidence of a noble residence on the Burgstein for at least the 1420s (“… that [Edel-] Lewt was sitting at Burckstein [,] they were called the Pucher”).

In 1474 a pilgrimage arose after an apparition of Mary , combined with the construction of a pilgrimage chapel (today western castle stone ruins), which belonged to the parish of the neighboring village of Krebes and as a so-called dispute parish thus to the diocese of Bamberg . Not least the location directly on the border of the dioceses of Bamberg and Naumburg led to long-term disputes between the two over the presumably considerable income from pilgrimages, which were contractually settled in 1487.

The construction of the second, eastern Burgstein church is to be seen in connection with the elevation to an independent parish in 1489 (it would therefore have been the parish church of the new parish). In the years 1512 and 1512, Elector Friedrich the Wise (1463–1525), the sovereign responsible, donated Burgstein textile furnishings. With the implementation of the Reformation in Vogtland and the associated rejection of the Catholic pilgrimage practice, the decline of the double church began. In 1540, the Saxon Elector Johann Friedrich ordered the demolition of both Burgstein sacred buildings, which were not completely demolished but left to decay. The members of the Burgstein parish were referred to the church in the neighboring village of Geilsdorf.

Regarding the manorial rule , the castle stone in the corridor of Ruderitz belonged to the Geilsdorf manor in the Electoral Saxon or Royal Saxon Office of Plauen . The Vogtland official border ran through the Burgstein area until the 19th century. While the northern places Geilsdorf, Grobau, Gutenfürst, Kemnitz, Krebes with Schwarzenreuth, Ruderitz, Schwand and Steins belonged to the Plauen office, the southern places Berglas, Großzöbern, Kleinzöbern, Dröda, Heinersgrün with Marxgrün, Pirk and Türbel were administered by the Voigtsberg office. In 1856, Ruderitz and the Burgstein district became part of the Plauen court office and, in 1875, the Plauen authorities .

In the age of romanticism , the castle stone with its two ruins was rediscovered in the 19th century. An inn built on the Burgstein in 1875/77 increased the attractiveness of the place considerably until the beginning of the 1950s and was the meeting point of an illustrious group of artists around the Vogtland painter and graphic artist Hermann Vogel , especially at the beginning of the 20th century . With the establishment of the restricted area on the inner-German border , the Burgstein area , which had previously been popular with tourists, was no longer accessible. The last host family on the Burgstein was evicted in 1952 . Only with the fall of the Berlin Wall did the situation in the restricted area end for the Burgstein area.

Special features of the individual districts of Burgstein

The remains of the castle in Geilsdorf

Home of Hermann Vogel in the district Krebes

The ruins of the pilgrimage and parish church are cultural monuments and popular hiking destinations. They were restored in the 1990s on behalf of the city of Plauen. The masonry was covered with mortar and the wall crowns were given rounded concrete heads. In the area in and around the ruins, the tree growth was removed. The interior is secured by galvanized steel bar doors. Access is only possible for events. There has been an association called Burgstein-er-Leben e. V. which has set itself the task of enlivening the environment; Guided tours are offered there with advance notice.

The churches were built by the dioceses of Bamberg and Naumburg, this was made possible by the location near the diocese borders and supported by Kasper Sack zu Geilsdorf. Due to an apparition of Mary by two miners, a fortified church was first built there, which was later expanded. When the diocese of Naumburg heard of the high number of visitors, the second church was commissioned. In the course of the Reformation , the churches were burned down and forgotten. It was not until the Romantic era that they were revived under Hermann Vogel and his friends.

The Burgstein was closed again by the restricted zone in the border area between the GDR and the Federal Republic of Germany. Access was impossible for most of the population. This only changed with the opening of the border on November 9, 1989.

In the area of ​​the municipality, the A 72 motorway runs with the junction in Pirk and the famous Elstertal bridge .

The municipal area is crossed from northeast to southwest by the Leipzig – Hof railway line . There are stops in Grobau and Gutenfürst. The Gutenfürst station was important as a border station for interzonal trains during the Soviet Zone / GDR .

Wikisource: Manors and castles in the kingdom of Saxony: Geilsdorf  - sources and full texts

Wikisource: Manors and castles in the kingdom of Saxony: Heinersgrün  - sources and full texts

Wikisource: Manors and castles in the Kingdom of Saxony: Good Prince  - Sources and full texts

Wikisource: Manors and castles in the kingdom of Saxony: Schwand  - sources and full texts

Wikisource: Manors and castles in the kingdom of Saxony: Pirk (Vogtland)  - sources and full texts