Tickets for an interzonal train journey from 1977

The passenger trains between West Germany or the Federal Republic of Germany and the Soviet Zone or GDR or Berlin were referred to as interzonal trains . In later years, a distinction was made between transit trains , which were primarily used for transit traffic to West Berlin , and the actual interzonal trains. The latter served a number of locations in the GDR, and generally did not go to Berlin train stations. Since the majority of the trains were used by retirees over the age of 60 (women) or 65 (men), the joke was the oneColloquial term in the GDR Mummy Express .

The term interzonal train was introduced in 1946 by the Deutsche Reichsbahn in the Soviet occupation zone . Even after the formation of the two German states, it was the official name for German-German passenger trains for both railway administrations, for the Deutsche Reichsbahn (DR) until 1954, for the Deutsche Bundesbahn (DB) until the 1960s. Colloquially, Interzonenzug lasted until the end of the GDR. Only with the reunification did the term disappear. In official usage, the name changed several times as a result of the respective political situation. In 1960, for example, the DR was talking about trains from GDR − West Germany , and in the 1970s and 1980s about trains from GDR − FRG . The trains were considered to be international passenger trains and were therefore in the DR's international timetable . At DB, they spoke of trains DB − DR (1970), and in the 1980s they also referred to trains Federal Republic of Germany - German Democratic Republic or Berlin (West) . At the technical level, the expression interchangeable trains or east-west express was also common.

The first interzonal train departs on May 12, 1949 at 2 p.m. from Friedrichstrasse station

The first freight train left the Ruhr area for Berlin on August 5, 1945. Continuous passenger traffic was not started until May 1946. The first (and until 1949 only) inter- zone express train - reserved exclusively for foreign travelers - ran between Berlin and Osnabrück . There was a connection to the Nord-Express to Amsterdam and Paris . Rail traffic between Berlin and the western zones was interrupted from April 23, 1948 to May 12, 1949 during the Berlin blockade due to alleged "technical difficulties" on Soviet instructions.

Since the only pair of express trains in the interzone traffic (FD 111/112) between Cologne and Berlin was constantly overloaded, five additional pairs of express trains were offered across the inner-German border from September 10, 1949 , which also carried wagons of the (then) second class for the first time :

In the summer of 1949 there was a special feature: the Reichsbahndirektion Nürnberg used additional trains to cope with the increasing traffic, which ran via Ludwigsstadt to the demarcation line. Here the travelers had to get off and cross the border on foot (crossing of trunk road 85 ). From Probstzella there was a connection with an express railcar to Berlin-Friedrichstrasse (FDt 79/80) in addition to local traffic from August 25, 1949.

Travel between the two German states until 1961

GDR citizens who wanted to travel to the Federal Republic of Germany needed an interzone passport to be able to use these trains, and from 1953 an exit permit from the GDR.

According to the timetable for 1960/61, trains ran until the Wall was built

Most of these trains also stopped at railway stations in the GDR, but were only released for domestic traffic there in exceptional cases (D 1035 from Magdeburg, D 197 from Eisenach, D 1001 and D 1099 from Gotha, D 1029 from Saalfeld, D 137 from Gera , D 145 from Plauen). In the case of the respective counter-trains, passengers traveling within the GDR had to leave the train at these stations at the latest.

Travel between the two German states between 1961 and 1989 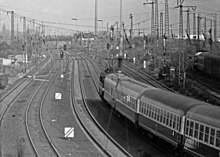 Interzonal train in Halle on its way to Berlin-Wannsee, 1984

After the wall was built , controls at the GDR border were intensified and the border stations were reinforced. There was a clear separation between the trains to Berlin and the trains to the GDR.

The interzonal trains were express trains to terminal stations in the GDR with sometimes long routes, for example Cologne– Rostock via Lübeck , Frankfurt am Main - Frankfurt (Oder) via Gerstungen - Leipzig or Munich – Rostock via Gutenfürst - Leipzig and Potsdam. From the first stop in the hinterland after the border control station, the trains also served internal GDR traffic. Therefore, they did not run through West Berlin territory. Interzonal trains that drove through the greater Berlin area used the Berlin outer ring and stopped at what was then Potsdam Central Station ( Potsdam Pirschheide ) , on the Cologne – Görlitz route also at the Berlin Schönefeld airport station, which is also outside Berlin . For trips between the Federal Republic of Germany and East Berlin, most travelers used the transit trains that served the Friedrichstrasse station in East Berlin , with border controls taking place at the station's control point. As a rule, there were only one or two pairs of trains per day and route on the interzonal trains.

The controls were quite extensive. For example, the Cologne – Rostock – Cologne interzonal train stopped in Herrnburg for 40 minutes when entering and leaving the station for thorough personal and baggage checks. In the subsequent section to Bad Kleinen , checks were carried out on the moving train for a further 40 minutes. The same procedure was followed at the other border crossings. Even within the GDR, these trains were escorted - at least near the border - by employees of the GDR transport police. On the German side, the passport controls were carried out without further delay in the journey in the moving train. Travelers boarding eastward at German border stations were checked on the platform there.

In the last few years of the GDR's existence, the offer was gradually expanded. Since the mid-1980s, some express trains have been running on weekends as small border traffic for day travelers from the Federal Republic between Lübeck and Schwerin , Lichtenfels and Saalfeld or Helmstedt and Eilsleben . As a result of making travel easier for GDR citizens, additional trains were introduced in 1988/89.

After the fall of the Berlin Wall , both German state railways tried to cope with the surge in demand by installing many new trains. After reunification, the trains were integrated into the normal offer of the railways; some, however, also discontinued without replacement (e.g. the connection Cologne – Görlitz and Cologne – Paderborn – Ellrich – Halle).

Transit train from Hamburg passes through the border installations at Berlin-Staaken station, 1986

In traffic with Berlin, the transit trains drove through the GDR without a scheduled traffic stop. Before the transit agreement , the waiting time at the border stations of the GDR was up to an hour. Checks were made when entering and leaving the GDR, and the luggage of the travelers was also checked. The transit agreement stipulated that only one passport control should take place while driving through the GDR. At the border stations of the GDR the idle time was now only 5 to 20 minutes (longer than 5 minutes only in Gerstungen and Probstzella due to the locomotive change). The trains were accompanied in GDR territory by members of a passport control unit of the Ministry for State Security and the transport police.

The transport police secured necessary operational stops by surrounding the train in such a way that no GDR citizen could enter the train and escape from the GDR . From the mid-1980s, there were regular stops of this kind for transit trains between Bebra and Berlin in Neudietendorf and Dessau , since electrical travel was carried out between these stations, as well as in Reichenbach on the way to and from Hof . In general, transit trains had special rights in the course of operations, which, above all, should help avoid unscheduled stops of the trains under all circumstances. The transit trains in GDR and West Berlin were manned by Reichsbahn personnel, dining , couchette and sleeping cars were managed by Mitropa employees , and vice versa the same applied to DSG cars.

In Berlin, the transit trains began and ended at the Rummelsburg depot , drove empty over the eastern light rail line and were thoroughly searched on the long-distance platform of the Berlin Friedrichstrasse station to prevent attempts to escape. Passengers were only allowed to board after the train had been released. This long-distance platform was in the eastern part of the city, but could be reached by S-Bahn and U-Bahn from the west without any controls. If you wanted to enter East Berlin or the GDR from the west, you had to pass the border control point inside the train station. Only after the inspection was the platform of the East Berlin S-Bahn accessible. In West Berlin, the trains stopped at Berlin Zoologischer Garten station , and from 1976, depending on the route, also in Berlin-Spandau or Berlin-Wannsee . On the train running displays, the destination was given as "Berlin Stadtbahn" , which was also the tariff name.

No one was allowed to get on or off the transit trains between the Federal Republic of Germany and Berlin in GDR territory. Exceptions were some border stations on the GDR-western border for traveling to the Federal Republic. The practice here was different: entry and exit in Gerstungen was prohibited, as has been the case in Probstzella since the 1970s . The exception there was a special feeder train from Saalfeld to one of the transit trains. In Schwanheide , Gutenfürst and Marienborn it was possible to switch to GDR internal trains. In Potsdam-Griebnitzsee on the border with West Berlin - except in the first time after the Wall was built up to 1964 - no passengers were allowed to get on and off, the stop was not listed as an operating stop in the course books.

Over loudspeakers at the GDR border station - for example in Schwanheide - the passengers with their destination Berlin were greeted as follows: “Schwanheide, this is Schwanheide! Dear travelers, we welcome you to the German Democratic Republic! All travelers who are not going to Berlin are asked to get off immediately, as this train does not stop as far as Berlin! I repeat...!"

Some of the pairs of trains that served transit traffic with West Berlin via the Helmstedt – Marienborn border crossing were international trains. They ended eastward not at Berlin Friedrichstrasse station, but in Warsaw (Warszawa Wschodnia (East)) or Moscow Belarusian station . These trains went westwards to Paris-Nord , Ostend or Hoek van Holland .

The following border stations were used (from north to south or west to east):

West Berlin could only be reached by rail from the GDR via the border crossing at Friedrichstrasse station with the Berlin S-Bahn .

The border crossings Walkenried / Ellrich on the inner-German border and Drewitz / Berlin-Wannsee were also used for freight traffic .

The US Army Transportation Corps , the Royal Corps of Transport (RCT) and the French Army (Train Militaire Français de Berlin) had their own trains for transit traffic to and from West Berlin . Locomotives and locomotive personnel were placed on the respective network by the Deutsche Bundesbahn and the Deutsche Reichsbahn. The border formalities were carried out by members of the Soviet Army in accordance with the Four Power Agreement . When controls were carried out on the Berlin-Wannsee-Potsdam section, this was not done in Griebnitzsee, but at what was then Potsdam Stadt train station (now Potsdam Hauptbahnhof).