Greater Berlin is a name for the city and unitary community of Berlin within the boundaries of the urban area that was created in 1920, as it still exists today with only a few changes.

The expansion of Berlin through the Greater Berlin Act

Population development in Berlin from 1871 to 2018. The change in area is also noticeable in the population.

In the 19th century, the industrial agglomeration of Berlin developed partly without coordinated infrastructure and urban planning , with the Hobrecht Plan finally making metropolitan structures possible across regions from 1862 onwards. After a special purpose association formed in 1911 had proven to be inadequate, the formation of the urban area over an area of ​​878 km² created more opportunities for coordinated planning and the compensation of large financial and social imbalances between parts of the area.

When it emerged on October 1, 1920, Greater Berlin was the most populous municipality in the world with 3.8 million inhabitants after London and New York and, with 878 km² after Los Angeles, the most extensive municipality in the world. As a result, the number of inhabitants rose again by around a sixth by the end of 1942 to a maximum of almost 4.5 million. Immediately after the end of the war , the population was 2.8 million and rose again to around 3.4 million in the post-war period . After a slight decline in the 1990s, the population rose again at the beginning of the 21st century to around 3.5 million in 2015. Forecasts from this period assume that the population figures of the 1920s will be reached again in the 2020s. The expansion of Greater Berlin has not changed significantly , taking into account the division in the meantime , the political upheavals and administrative reorganizations and, after some area exchanges and adjustments, is 891.68 km².

Map of the 1861 area expansion

Since the beginning of the industrial revolution , but especially during the high industrialization after the founding of the German Empire in 1871, Berlin's population grew steadily . Free areas in the capital of Prussia and the German Empire, which bordered neighboring communities and were previously mainly used for agriculture, were increasingly needed for residential and industrial purposes .

It had been discussed since around 1820 whether the Berlin urban area could be expanded by incorporating the suburbs of Moabit and Wedding , the zoo and the arable land of Schöneberg and Tempelhof bordering Berlin to the south . The actors in the city and the surrounding area only represented short-term self-interest: the Niederbarnim district advocated the incorporation of Moabit and Wedding because the high social spending there burdened the district budget, the Teltow district was against the incorporation of the Schöneberg and Tempelhof areas because the local bourgeois population was one was an important source of tax revenue. The Berlin city council refused to take over the financially weak working-class communities Moabit and Wedding, but was very interested in the wealthy Schöneberg and Tempelhof areas. After 40 years of fruitless local political discussion, the above-mentioned areas were incorporated into the city of Berlin by a royal cabinet resolution of January 28, 1860, on January 1 of the following year.

In order to unite the conflicting interests of the city and the surrounding area in a joint instance, Lord Mayor Arthur Johnson Hobrecht proposed in 1875 that the cities of Berlin, Charlottenburg , Spandau and Köpenick and the districts of Teltow and Niederbarnim be founded into a new "Province of Berlin". In return, Berlin wanted to forego incorporation in order to meet the interests of the districts. However, the plan was rejected by the districts as well as in the parliaments of the city and the country. The Prussian government had no interest in the capital region leaving its core province of Brandenburg .

Since the 1890s, the discussion about the uncoordinated development in urban and transport planning and the non-solidarity financing of joint tasks increased again. The rich suburbs in the south and west benefited from the low social costs of their affluent population, which enabled them to cut taxes, while the opposite effect occurred in the core city and the eastern suburbs.

In January 1906 the government master builder Emanuel Heimann , the architect Albert Hofmann and the building officer Theodor Goecke applied to the Association of Berlin Architects for an ideas competition for the creation of a uniform baseline plan. In cooperation with the Berlin Architects 'Association, an architects' committee for Greater Berlin was founded in the same year under the chairmanship of the secret building officer Otto March . In 1907 he published the "Suggestions for obtaining a basic plan for the urban development of Greater Berlin", which recommended a uniform development plan and formulated basic principles. As a result, an international “competition for a basic plan for the development of Greater Berlin”, or “Greater Berlin Competition” for short, ran from 1908 to December 1909. Shortly before the submission deadline, it was decided to expand the presentation to include a “General Urban Development Exhibition”, which took place at the University of Fine Arts in Charlottenburg from May to June 1910. The projects of the groups of Hermann Jansens , Josef Brix and Felix Genzmer in cooperation with the Hochbahngesellschaft (combined first and second prize) and Bruno Möhring , Rudolph Eberstadt and Richard Petersen (third prize) were awarded.

With the formation of a special purpose association for Greater Berlin (law of July 19, 1911) an attempt was made on the one hand to overcome some of the problems, but on the other hand to prevent a dominant position of the "red" Berlin in Prussian and imperial politics. However, this association was so non-binding that it could hardly meet the expectations placed on it. The increasing social differentiation between the communities caused additional problems and the association had no competencies in questions of social equality.

In 1912, the population of the city of Berlin, which had only increased slowly since the turn of the century, peaked at around 2.1 million.

Ultimately, it took the collapse of the German Empire through the First World War and the Revolution to finally politically enforce the creation of Greater Berlin. As a lasting success of the association, the extensive forests in the Berlin Weichbild have been preserved. They go back to the permanent forest contract of 1915. 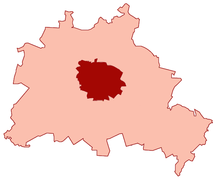 The driving force behind the law on the formation of a new township in Berlin of April 27, 1920, or Greater Berlin Law for short , was Berlin's Lord Mayor Adolf Wermuth .

In the vote on April 27, 1920 in the Prussian constitutional assembly , the SPD , USPD and parts of the DDP voted in favor, DNVP , DVP and the center against. The law was passed by 164 votes to 148 with five abstentions and came into force on October 1, 1920. This means that the six independent cities of Berlin-Lichtenberg , Berlin-Schöneberg , Berlin-Wilmersdorf , Charlottenburg , Neukölln and Spandau as well as from the surrounding districts of Niederbarnim , Osthavelland and Teltow the municipality of Cöpenick , 59 rural communities and 27 manor districts were incorporated into the previous municipality of Berlin .

In addition to the 1.9 million Berliners up to then, there were another 1.9 million inhabitants; almost 1.2 million of them through the seven surrounding cities alone. The urban area increased from 66 km² to 878 km². This made Berlin - after Los Angeles - the second largest city in terms of area and in terms of population - after London (7.3 million) and New York (5.6 million) - the third largest city in the world.

After the urban district of Berlin had left the province of Brandenburg in 1881 , it now formed its own administrative district with functions similar to that of the province with the incorporated regional authorities in the Free State of Prussia . Greater Berlin was created with 20 consecutively numbered districts ,

When creating the administrative districts, to which a number of self-government tasks were assigned, care was taken to ensure that “bourgeois” and “proletarian” districts were roughly balanced. Nevertheless there were “Los-von-Berlin-movements” until 1923, but all of them failed. The law made it possible to implement integrated urban planning and urban design. This created an important basis for Berlin's rise to become a metropolis with international status in the 1920s.

The law is still legally effective today, as reference is made to it in the official comments on the Unification Treaty of 1990 in order to define the extent and borders of the federal state of Berlin.

Further use of the term "Greater Berlin"

Over the decades, the term Greater Berlin disappeared more and more from linguistic usage, but was still present in the administration. It was included in the Basic Law for the Federal Republic of Germany of May 23, 1949, where it stood until German reunification and the associated repeal of Article 23 in 1990, de jure to the whole city, but in fact only related to Berlin (West) . Thus the Government in called East Berlin until 1977 still Magistrate of Greater Berlin and the Ministry of State Security existed for Berlin next county governments for 14 of the GDR districts , the Department of Homeland Security United Berlin . The 1950 constitution of Berlin named city and country just Berlin . The term Greater Berlin was the delimiting designation of "the previous regional authority Greater Berlin".

Even if the outer city limits of Berlin are still largely identical to the one established in 1920, there have been boundary changes over the years for various reasons:

Although almost unchanged over the course of the year, the character of the city limits established in 1920 has changed dramatically several times.

The amalgamation of several town centers resulted in multiple duplications of common street names, such as Dorfstraße , Hauptstraße or Bahnhofstraße . In the 1930s, a number of renaming campaigns - especially in 1931 and 1938 - began to replace some of the multiple street names with local references. Preferably the respective village street , or already main street, was replaced by the addition Alt- before the respective district. In 1938 in particular, streets with the names of members of the Hohenzollern family were named after people who were close to National Socialism. In 1950 there was another extensive change (mainly) of multiple existing street names. In 1951, around 150 street names "of a Nazi, militaristic or other out-of-date nature" were eliminated in the East Berlin districts.

Renaming is always linked to official actions, so there are still five birch avenues , five birch streets and three birch paths , three acacia avenues and two acacia streets , four oak streets or seven streets with the name Kastanienallee in the 2010s . Two of the 30 Bahnhofstrasse that were initially available through the incorporation of the districts into Berlin were no longer available , and around 20 were renamed in the last hundred years. But in 2014 there were still nine Bahnhofstrasse in Berlin in Alt-Hohenschönhausen , Blankenburg , Blankenfelde , French Buchholz , Karow , Köpenick , Lichtenrade , Lichterfelde and Schöneberg .

The street directory of Berlin is kept centrally, but the responsible offices in the districts are independently authorized to assign street names. In order to avoid duplication in the following, the Berlin Road Act prescribes an administrative act for the dedication of roads . In the other districts it must be clarified whether the desired street name (from the district or, in the case of private roads, the owner) is not already available in the State of Berlin.

See also : Lists of all Berlin streets and squares