Pankow [ ˈpaŋko ], [ 'pankoː ] is the eponymous part of the Berlin district of Pankow .

In parlance, localities of Pankow can also be in the buildings of Heinersdorf (Pankow-Heinersdorf) and Niederschönhausen (Pankow-Schönhausen) to the north . Pankow is located on the Panke and is named after this tributary of the Spree .

From the 13th to the middle of the 20th century

Archaeological traces of late Slavic pre-settlement have not yet been found. According to this, Pankow was founded around 1230 by German settlers “from wild roots”, like all other localities on the southwestern Barnim . The Angerdorf arose on the Panke . From her the Slavic waters was adopted as a place name . It was first mentioned in a document in 1311. The land register of Emperor Charles IV from 1375 indicated 42  hooves for the village , 4 of which were parish hooves ( Wedemhof ). Only 6 Hufen managed full farmers . The residue was distributed among 3  Ritter farms : Kerstian Duseke with 12 hooves (6 of duty-free), Hans Duseken with 7 1 / 2  hooves and Berlin he citizens Wartenberg with 12 1 / 2  hooves as Lehen from its city council . Of the 22 farms , 13 belonged to the Wartenberg farm and the rest to those of the Dusekes. The two and the Berliner also shared the church patronage . A jug poured out in the village . The village church of Pankow was built as a late Gothic stone church in the 15th century. Due to an extensive brick extension in the years 1857–1859, the village church lost a significant part of its village character.

The village development phase from the Middle Ages to the 19th century was replaced by an urban boom in the early years of the 19th century. The original village character can still be seen in the course of the Breite Straße , which traces the original village green with the church in the center. The Kavalierschloss located at the beginning of today's Damerowstraße underlines this grown structure of the district. The hunting parties to Buchholz and beyond in the surrounding area started from here in the 19th century. This building was used as a kindergarten after the Second World War .

In the following centuries, Pankow was shaped by changing ownership, among other things, the Elector Friedrich III bought in 1691 . a mansion and had this converted into Schönhausen Palace . This gave Pankow increased importance as the residence of the Hohenzollern family . At the end of the 19th century, the city began to develop into a place for summer retreat, which in turn led to an expansion of the infrastructure . The current road system was laid out around 1900 using existing trade routes such as Wollankstrasse.

Since 1818 Pankow belonged to the Niederbarnim district . Although the population of the rural community was already 58,000 people in 1919, the place was still formally a "village" at that time as it had not been granted city rights. In 1920, Pankow was incorporated into the district of Pankow by the Greater Berlin Act . The town hall of Pankow has been the seat of the district mayor since then.

The end of World War II

At the end of the Second World War , the Red Army first advanced to Pankow via Heinersdorf. In the area of ​​the Prenzlauer Promenade / Binzstrasse, bitter skirmishes took place with the last groups of the Volkssturm who had holed up in Neumannstrasse. On April 22, 1945, the troops set up their quarters on Binzstrasse. A burial place for the fallen Red Army soldiers was built at Trelleborger Straße . The reburial of the dead took place with the erection of the Soviet memorial in the Schönholzer Heide (in the Volkspark Schönholzer Heide ).
In Berlin-Buch there is another memorial in the Bucher Schlosspark . The Red Army soldiers originally buried there were also reburied in the memorial in the Schönholzer Heide.

District history since the middle of the 20th century

Between 1945 and 1949 Pankow was a district in the Soviet sector of Berlin and between 1949 and 1990 a district in what was then East Berlin's district of Pankow. This administrative area included the now independent districts of Niederschönhausen with Schönholz and Nordend, Rosenthal with Wilhelmsruh, Blankenfelde, Buchholz, Heinersdorf, Blankenburg, Karow and Buch.

In the 1980s, the Berlin magistrate had large areas of allotment gardens cleared and new residential areas built on the building land, for example on both sides of Arnold-Zweig-Straße.

After the fall of the Wall (old) Pankow was then between 1990 and 2001 a part of the Pankow district. After the district administration reform in 2001, Pankow remained a district in the now enlarged Pankow district.

In the area of ​​the former marshalling yard between the Pankow and Pankow-Heinersdorf stations , bounded to the north by the S-Bahn route and to the south by the Granitzstraße / Prenzlauer Promenade, the Pankower Tor district is planned. The investor is the entrepreneur Kurt Krieger , who grew up near the castle park . a. the furniture stores Furniture warriors, Hoffner and Sconto belong. The area, which was acquired by Krieger in 2009 and has been in the planning phase for several years, also includes the listed roundhouse at Heinersdorfer Brücke . The marshalling yard and freight yard was closed in 1996. The Berlin Senate and the Pankow district have long been against a shopping center planned here, but a compromise is now emerging. So that other shopping centers and other shops in the district are not endangered, the BVV reached a compromise with the investor: the new shopping center will be smaller and will not be built near Pankow train station, but in the direction of Prenzlauer Promenade. On April 25, 2018, the district assembly signed the letter of intent for the construction of 2,000 apartments (30% of which were social housing), a shopping center, a primary school on the former Pankow marshalling yard, a furniture store at the Prenzlauer Promenade , a park with 800 commuter parking spaces Parking garage for around 1000 bicycles near the Berlin-Pankow train station . When construction is still not in sight in 2020, Berlin's state curator Christoph Rauhut speculated : "In my opinion, Mr. Krieger only acquired the eastern area to prevent a competitor from settling."

After the population had not increased significantly since its foundation, it rose from the middle of the 19th century to about a hundredfold until around 1910. After the end of the Second World War and the clearing of rubble in the district, there was a steady increase in the population, which has only been declining again since 1990. 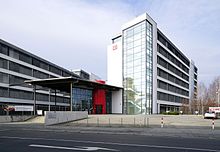 In Berlin-Pankow, the headquarters of the Eastern regional division of DB Netz is located on Granitzstrasse in the east of the district . In addition to the administration of the regional area, this operations center includes workstations of a network coordinator , several area dispatchers and several train dispatchers who are responsible for the dispatching of trains (exclusively trains of the Berlin S-Bahn ) in Mecklenburg-Western Pomerania, Berlin and most of Brandenburg are. For this purpose, numerous dispatchers work in this control center, who work exclusively with electronic interlockings (ESTW).

In the district are the S-Bahn stations Pankow and Pankow-Heinersdorf, which are served by the S2 , S8 and S85 lines. The Wollankstrasse train station (lines S1 , S25 , S26 ) is also in the area of ​​the Pankow district on the border with Wedding .

There are also two underground stations , both on the U2 underground line. Until 1993, today's underground station Vinetastraße , which opened on July 1, 1930, was still called Pankow (Vinetastraße) . It was originally opened as Vinetastraße . At that time an extension was planned via today's Berlin-Pankow train station to Pankow-Kirche. However, the global economic crisis prevented further construction. The station is underground, so the trains coming from the Schönhauser Allee high station have to go down a ramp.

Today's Pankow underground station is the terminus of the U2 line. It opened on September 16, 2000. As early as 1988, the route north of the Vinetastraße train station was extended to connect a planned workshop on Granitzstraße. However, this was not realized due to the fall of the Berlin Wall . In 1994 the track system was expanded to a turning track system and in 1997 further construction began up to the transfer station with the S-Bahn. Behind the station there is a sweeping track system, which can be included in the route even if the expansion to Pankow Church is still planned.

Several tram and bus lines open up the district. The area around Pankow train station is a major transport hub .

In 1920 Pankow was incorporated into Greater Berlin . The newly created district was administered by district mayors until 2001:

Pankow in art, in the media and in sports

Districts of Berlin in the Pankow district