This article describes the medieval city ​​of Berlin , and later the historic district of Alt-Berlin . For the Bar Alt-Berlin see Alt-Berlin (Bar) . 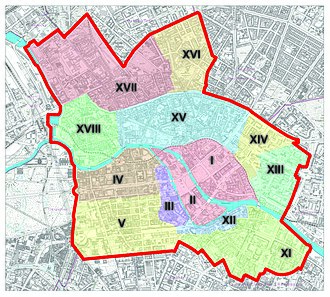 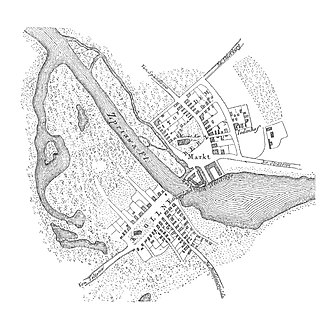 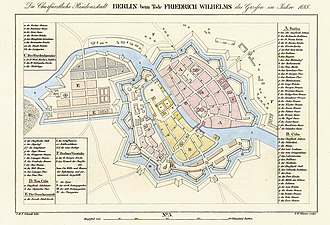 Old Berlin is a historic district in present-day Berlin district of Mitte . It is identical to the city of Berlin , which together with Kölln formed the twin city Berlin-Kölln , the founding origin of today's metropolis Berlin. Mentioned for the first time in 1244, Berlin was an independent city from the 12th century to 1307 and from 1442 to 1710 with close ties to neighboring Kölln. In 1710, Berlin and four other cities formed the Prussian residence city of Berlin. From then on, the name was used to distinguish it from the residential city and later capital Old Berlin .

Old Berlin lies on the right bank of the Spree and was surrounded by the fortress moat on the northeast side until 1875. After it was filled in, the Berlin Stadtbahn was built in its place by 1882 , the viaduct of which today forms the north-eastern border. Alt-Berlin is connected to Alt-Kölln via four Spree bridges, the Mühlendamm , the Rathausbrücke , the Liebknechtbrücke and the Friedrichsbrücke . Other adjacent historical districts are Luisenstadt in the south, Stralauer Vorstadt and Königsstadt in the east / northeast, and Spandauer Vorstadt in the north. 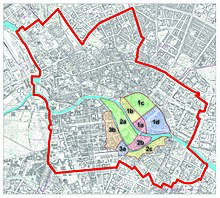 District in the city center of Berlin

From around 1727, old Berlin was divided into four quarters:

At the beginning of the 19th century, the city was divided into 17 districts:

From 1852 the city districts were reduced to eight:

From 1884 to 1920 there were only five nameless, numbered districts. After that there was no longer any administrative division of the district of Old Berlin, the name of which was itself only informal.

In 1987 the name Nikolaiviertel was reintroduced with the completion of the residential and business district around the Nikolaikirche . In the current city debate, the names Klosterviertel , Marienviertel and Heilige-Geist-Viertel are being used again.

With the incorporation of the city of Berlin into the Prussian royal seat, it became a district and was henceforth called Old Berlin. At times the district was still called Berlin.

Brief overview of the story

The town of Cölln, located on the Spree island , was first mentioned in a document in 1237, followed by the mention of Berlin in 1244, which was located on the northern bank of the Spree. In 1307 the two cities got a common magistrate and in 1309 a common town hall on the Long Bridge (today Rathausbrücke). In 1442, the joint city administration of Berlin and Kölln was repealed by Elector Friedrich II . The five cities of Berlin, Cölln, Friedrichswerder , Dorotheenstadt and Friedrichstadt were finally united in 1710 to form the royal capital and residence of Berlin .

When Greater Berlin was formed in 1920, Old Berlin was incorporated into the newly formed Mitte district. At the end of the Second World War , old Berlin was largely destroyed.

From 1965 old Berlin was completely redesigned and received a completely new look, largely abandoning the historical city plan and after the remaining building structure was torn down in the 1960s and 1970s. In addition to multi-storey residential and commercial buildings, the Berlin television tower was built.

Apart from the Rotes Rathaus and the Marienkirche , nothing in the central area dominated by the Berlin TV tower reminds you that you are in the historic city center, which was densely built up until the Second World War. Since then it has been a spacious pedestrian area with individual groups of trees, flower beds and the water features at the foot of the television tower. In addition, the former castle fountain with the new name Neptune fountain was included in the newly designed outdoor facilities. To the west of Spandauer Strasse, a park was created that has been called the Marx-Engels-Forum since the Marx-Engels monument was erected in 1986 .

From 1983 to 1987, the Nikolaiviertel and the eponymous Nikolaikirche were rebuilt.

The few historical buildings that survived the war or were also rebuilt are now listed, such as the Berlin Regional Court , the Old Town House on Jüdenstrasse , the Heilig-Geist-Kapelle , the ruins of the Franciscan monastery church and the baroque parochial church . In the Littenstraße a remnant of the old is still ramparts preserved.

The inner city plan , which was drawn up by the former city planning director Hans Stimmann on behalf of the Senate Department for Urban Development and approved in 1993, provides for the restoration of parts of the inner city structure under the premise "The city center as a place to live". In particular, the streets and squares should be able to be experienced again and reconnect the urban spaces that were cut up by the traffic aisles of the 1960s. In old Berlin, the whey market is to be surrounded again by an adjacent development. To this end, the street layout is to be changed and made narrower by means of denser development. The planned tram is to create the connection between Leipziger Strasse and Spandauer Strasse.

In the years 2015/2016, the public participation procedure Alte-Mitte - Neue Liebe and since 2018 the redesign of the city center, including old Berlin, has been discussed in the Stadtwerkstatt .

In addition to temporary theater projects, there is currently the theater discounter in the former Fernmeldeamt-Ost at Klosterstrasse 44. The Palais Podewils is also the venue for the Grips Theater .

The Podewil in Palais Podewils at Klosterstrasse 68 was already a place of art performance and production as a house of young talents and today sees itself as a central place for cultural education in Berlin. In the Franciscan monastery church , the district office of Mitte of Berlin has established a cultural venue for exhibitions, theater and concerts. There is a studio house project at Klosterstrasse 44, the existence of which is, however, threatened by the demolition plans of the house owners.

There is an overview of important, no longer existing buildings on the pages of the individual quarters of Old Berlin, the Nikolaiviertel , the Heilige-Geist-Viertel , the Marienviertel and the Klosterviertel .

There are 33 individual monuments in old Berlin and beyond that there are garden monuments, ground monuments, monument ensembles and overall facilities.

The urban ensemble between Alexanderplatz train station and Spandauer Strasse or between Rathausstrasse and Karl-Liebknecht-Strasse , which was built between 1966 and 1972, has decisively changed the cityscape of old Berlin. With an open space flanked by high residential buildings with the television tower , the capital of the GDR was to be given a striking face. Elements of the ensemble are the town hall passages with the five nine-storey houses on top of them, the buildings on Karl-Liebknecht- and Spandauer Strasse, also with houses on stilts and the former market hall (now a supermarket), the television tower with its conversion and the open space design of the train station to Spandauer Straße with water features and the Neptune fountain . This also included the multi-purpose restaurant Alextreff, which was demolished in 2000.

Sons and daughters from old Berlin