This article deals with the administrative seat of a municipality or city administration. For further meanings see City Hall (disambiguation) . 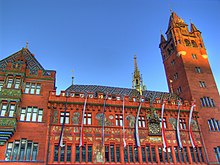 The Zurich town hall , built free-standing in the river, the promenade later extended to there

As the administrative center, the town hall often houses several or all of the municipal authorities (offices) such as the residents ' registration office or the registry office . Sometimes individual authorities are outsourced or at least additional citizens' offices are set up for public traffic .

There were already town halls ( bouleuterion ) in ancient Greece where the council met. However, the bouleuterion was not also the place for the administration, which was housed in the Prytaneion .

In the Middle Ages , the first town halls (also known as playhouses ) developed - especially as a result of the granting of town charter - as multi-purpose buildings and the most important secular building in cities. The magistrate or city council met here, which was usually made up of twelve councilors and judges from influential families or patricians and was therefore also known as the "twelve". As the seat of the council, the town hall was closed to the guilds and guilds in many places, which is why they built their own buildings. The ambitions and self-image of the urban elite were reflected in the often rich architectural design of the building.

Since many town halls arose from the granting of town and market rights, the ground floor was very often designed as an open market hall . Above this was another market hall, a “dance floor” or the council and court room, which was usually on the top floor. In addition, mostly only one or two administrative rooms and a kitchen were set up for catering. In some places the town hall tower housed the only public clock in the city (see also: Belfry ).

In the 19th century, after regaining municipal autonomy, the task of building the town hall became important again. Often one orientated oneself on the Gothic design language of the first heyday of the town halls (e.g. the Viennese town hall , a building from the Wilhelminian era ). In the 20th century, impressive town halls were built in Scandinavia, for example, Stockholms stadshus and Oslo town hall .

The town hall building was usually built in the center of the cities and gradually expanded. In the course of the community reforms since the 1970s, many town halls in today's districts were used for other purposes.

The Essen town hall has the highest actually used height, as the overall height is implemented there as a usable area. In addition, it is the only town hall in Germany to have a helicopter landing pad, which however was never usable. The building in Essen is 106 meters high, has 69,000 m² of usable space spread over 23 floors and was completed in 1979.

The largest height is the New Town Hall in Leipzig with a 114.5 meter high tower, which, however, apart from the aesthetic effect, has no noteworthy function. The building, which is over 110 meters wide, was completed in 1905.

The Basel Town Hall was built in its current form, with its two extensions on the right and left side, in 1904. The building, located directly on Basel's market square , stands out with its red sandstone and striking tower. The political center of Basel was established in the same place in 1290. In 1501, Basel joined the Swiss Confederation . The Grand Council , which spared no expense at the time, then decided in 1503 to build a new building with a connection to the “Palace of the Lords”. During this time, the coats of arms of the places ( cantons ) were created on the battlements. Hans Holbein the Younger was commissioned to paint this hall in 1521 and Hans Bock the Elder to restore it.

The late Gothic town hall in Leuven in Belgium is considered to be one of the most magnificent town halls of its time . Instead of a town hall tower, there are two corner towers on each of the two gable ends and a tower bay window on the ridge.

The predecessor building of the Cologne city hall , the first documentary evidence of which comes from the shrine map from 1135, is considered Germany's oldest city hall .

All over Europe there are town halls from different eras and each with different regional influences. The town halls, as the flagship of the cities, were also an expression of a local identity.