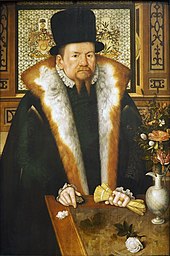 Picture of a wealthy patrician (1569) by Ludger tom Ring

Patrician ( Latin : patricius, Greek : πατρίκιος) was the name for members of the long-established upper class in ancient Rome . Derived from this, the socially relatively closed upper class in many medieval and early modern cities is also called patriciate . The aristocratic rule of the bourgeois patriciate is known as the urban aristocracy .

German cities of the Middle Ages and the early modern period

The Overstolzenhaus in Cologne from 1225 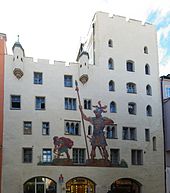 The Goliath House in Regensburg from 1260

In the German imperial cities of the Middle Ages , a patriciate developed from the former local nobility or the local ministeriality from the 11th century on . They called themselves “genders”, but patricius is also used in documents and documents written in Latin for the distinguished, wealthy citizens of German cities. The patricians occupied the council and other important municipal offices and tried to maintain an exclusive right to these offices, that is, to make the patricians the sole advisable families. The patricians, who were mainly active as merchants, formed guilds and enforced a hereditary right to the coveted offices. Patricians were also merchants, but - in contrast to those who sold “by yard , pound and lot ” - they devoted themselves exclusively to wholesale and long-distance trade .

They often founded associations called patrician societies, which were often organized along the lines of traditional parlor societies or religious brotherhoods . It is significant, however, that they were "closed societies", which is evident from the dance statute of the city of Nuremberg , which was drawn up in 1521 . Nobody could join such a society of their own volition, but outsiders were accepted, if at all, through co-optation by the existing members. Often the admission into such a society decided on admission to the patriciate and thus on the eligibility for election to the city council. The societies' "swear letters" resembled early constitutions, which for example regulated the distribution of seats between patricians and craft guilds. In many cases the patricians only defined themselves as a closed, separate estate through these associations and their legal rights.

With the strengthening of the handicrafts and the development of a bourgeoisie organized in guilds , the craftsmen began to fight against the privileges of the patricians united in guilds from the 13th century. As a rule, the guilds were able to gain a share in the city ​​council . In Cologne , the entire city constitution was tailored to the guild constitution, while in Augsburg , Nuremberg , Regensburg , Bern , Frankfurt and in most of the Hanseatic cities the patriciate was able to assert itself. Only in Hamburg was there no closed patriciate as in the southern German imperial cities, in Bremen and in Lübeck ( circle society ). As a result, the Hanseatic people became the ruling class there.

The medieval “patriciate” did not call itself that; one usually spoke of “genders”, as demonstrated for Cologne , Frankfurt am Main , Augsburg and Nuremberg . The expression “patrician” in its transfer to the urban upper class of the Middle Ages does not itself come from this time, but only from the Renaissance . In 1516, the Nuremberg councilor (city lawyer) Christoph von Scheurl (1481–1542) was appointed vicar general of the Augustinian order , Dr. Johann Staupitz, charged with drawing up an outline of the Nuremberg Constitution; He presented this on December 15 of the same year in the form of the epistle that is still famous today . Since this work was written in Latin, Scheurl referred to the Nuremberg "families" in an obvious analogy to Roman constitutional conditions as "patricii", which then became "patriciate" in the contemporary reverse translation. The word did not become generally accepted in this usage until the 17th and 18th centuries.

There were patricians not only in imperial cities. A city nobility could also develop in cities with a princely city lord. B. in Munich or Münster . In Münster, the people of the city nobility called hereditary men . The hereditary families, of which not a few were knightly , defended the recognition of their membership of the primitive and knightly noble nobility in the context of the hereditary dispute. The extremely successful family of entrepreneurs from Augsburg, the Fugger family , rose to the nobility at the beginning of the 16th century and soon after even rose to the nobility ; the Welser and the Tucher also belong to the most famous merchant families of Upper German imperial cities.

The oldest patrician families were often considered to be equal to the land-based nobility . The genealogical handbook of the nobility continues to include those families, even without a nobility predicate, whose members can be shown to have been inherited council families in German imperial cities by the 14th century at the latest.

In the Republic of Venice , the patriciate of Venice had already taken power in the High Middle Ages ; Something similar happened in the Republic of Genoa . Since the late Middle Ages , ruling patricians developed in many other European city-states (the trade republics), for example in Florence and the other northern Italian cities. In the Republic of the United Netherlands , the port cities were dominant from the beginning, especially Amsterdam , which was ruled by the patrician rulers of Amsterdam . Similarly, in Switzerland , which officially remained part of the Holy Roman Empire until 1648, the wealthy city cantons were politically leading, and they in turn were ruled by the patriciate of the Old Confederation . As in the German imperial cities, these patricians often became aristocratic at an early stage, which is why one speaks of “urban aristocracies” at the head of so-called “ aristocratic republics ”.

In England, on the other hand, the gentry , a ruling class formed primarily from rural landowners, ruled the increasingly powerful House of Commons . In France, shaped by a central monarchy since ancient times, the rise of the bourgeoisie was slowed down by the Huguenot Wars ; its weakening made absolutism possible ; It was not until the second half of the 18th century that it set the tone and triggered the French Revolution of 1789; finally under the " citizen king " it came to the lever of political power.

Since the 17th century, especially in the imperial and Hanseatic cities, leading families of the merchant class have formed newer upper classes who - in contrast to the patricians of the Middle Ages and the early modern era - no longer primarily aspired to the nobility (through the acquisition of Manorials and nobility titles), but emphasized bourgeois values ​​such as the ideal of achievement (mostly commercial) and a certain restraint in the display of wealth made their mark. These families, such as the Hanseatic people or other upper-class citizens , are therefore sometimes also referred to as " civil nobility ". They saw themselves as “patricians” and developed a sense of class that was not inferior to that of the older, aristocratic patricians. Comparably elitist groups were also able to form in the growing professional group of civil servants, an example of such an educated patriciate of civil servants are the “ Pretty Families ” from Kurhannover . However, even these bourgeois elites were often detached from the end of the 18th century in the wake of revolutions and industrialization in their local spheres of activity by new economic elites - a neureiches economic middle class (the bourgeoisie ) and a cultured educated middle class came into the light.