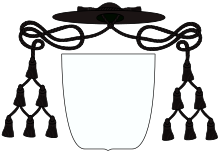 Coat of arms of a vicar general

As early as the Middle Ages , diocesan bishops appointed vicars general or episcopal vicars, called archdeacon or archdeacon at the time , who were entrusted with the administration of the corresponding episcopal area. They could also perform tasks of the bishop, such as holding liturgies (for example certain holy masses , devotions , pilgrimages ), consecrating churches or appointing pastors .

Task and power of attorney

The vicar general (vicarius generalis) "supports the diocesan bishop in the management of the entire diocese" (Can. 475.1 CIC) and is therefore in accordance with the applicable canon law with vicarious authority or authority ( potestas ordinaria vicaria , in the sense of Can. 131 , 2 CIC).

As a rule, only one vicar general is to be appointed, unless the size of the diocese, the number of inhabitants or other pastoral reasons suggest otherwise ( can. 475 §2 CIC ).

By virtue of his office, the vicar general has the executive power ( potestas executica ) throughout the diocese , which the diocesan bishop has by law in order to be able to issue all administrative acts , with the exception of those that the bishop has reserved for himself or those that are legally entitled to a special mandate of the bishop ( can. 479 §2 CIC ).

The vicar general is therefore charged with the execution of general administrative matters as well as the execution of the tasks that have been assigned to him by the bishop ( potestas executica a ordinario delegata , in the sense of can. 479 §1 CIC ). The tasks and official powers of the vicar general are therefore always dependent on the definition and delegation of the respective diocesan bishop.

The tasks and powers of a vicar general are partly expanded interpretatively, in that he is referred to as the “personal” deputy of the diocesan bishop or even as his alter ego . Both views, however, contradict the objective-functional task, from which no personal closeness can be derived. Nevertheless, a vicar general as deputy has the second highest office in a diocese after that of the diocesan bishop before the auxiliary bishops. However, he is always dependent on this and has to obey his orders and instructions.

The office of Episcopal Vicar ( vicarius episcopalis ) is administratively equated with the Vicar General, but has a juridical restriction on a certain segment within a diocese. The diocesan bishop can appoint one or more episcopal vicars who have the same ordinary power as the vicar general ( can. 476 CIC ) in a precisely defined area of ​​the diocese, in a more precisely defined area of ​​responsibility or for the faithful of a certain rite or group of people .

An official is the head of a church court ( tribunal ecclesiasticum ) and, as judicial vicar, the representative of the diocesan bishop at the court in whose name he speaks justice .

Requirements and Term of Office

A vicar general must be a priest , at least 30 years old and a doctor or licentiate (Lic. Theol.) In canon law or theology , or at least really experienced in these disciplines, "proven by orthodoxy, righteousness, prudence and practical administrative experience" ( can. 478 §1 CIC ) and blood related to the bishop at most in the fifth degree ( can. 478 §2 CIC ).

Vicars General in the German dioceses

Vicars General in the Austrian dioceses

Vicars General in the Swiss dioceses

Religious communities that have a superior general at their head also know the title of vicar general for his deputy. In this context, there are also vicars general in some sister congregations.

Since the military chaplaincy is subordinate to a military bishop, he has a vicar general.

In the Anglican Church , the official title vicar general is also common. In contrast to the Roman Catholic Church, an Anglican Vicar General only acts when the bishop is prevented from doing so.

The vicar general of the Catholic diocese of the Old Catholics in Germany is Jürgen Wenge .

In the Middle Ages, vicar was also used to refer to the deputy secular rulers. The vicar general in particular was the king's or emperor's deputy in an area that was not under direct ducal authority.