Diocese Paderborn is a redirect to this article. For the territory that was independent until 1802/03, see the Principality of Paderborn .

1200 years of the Diocese of Paderborn: German commemorative stamp from 1999

Belong to the Archdiocese of Paderborn

The areas in Hesse and Lower Saxony were part of the former principality of Waldeck .

The diocese Paderborn was 799 by Pope Leo III. and erected the then Frankish King Charlemagne . Later it became part of the ecclesiastical province of Mainz . The secular territory of the bishop acquired during the Middle Ages formed the prince-bishopric of Paderborn .

After the fall of the Holy Roman Empire of the German Nation , the diocese underwent a fundamental restructuring in 1821 with the Bull of Pope Pius VII. De salute animarum , an agreement between Prussia and the Holy See on the reorganization of the Prussian dioceses. The parts of the Apostolic Vicariate of the North , which were located in the Prussian province of Saxony and in the Saxon duchies , were incorporated into the Diocese of Paderborn, but were geographically separated from the core area. In the west, the former Sauerland region of Cologne became part of the Paderborn diocese. As a result of this reorganization, Paderborn became one of the largest German dioceses through the allocation of the diocese Corvey and areas of the dioceses Cologne, Osnabrück, Mainz, Minden, Halberstadt and Magdeburg. Paderborn was no longer part of the Mainz metropolis, but, along with Trier and Münster, belonged to the Archdiocese of Cologne. This restructuring process was completed in 1849 with the incorporation of the new parts of the new diocese under the then Vicar General and later Bishop Richard Dammers (1841-1844). From 1868 the Paderborn bishops were also administrators of the Apostolic Vicariate Anhalt until it was formally incorporated into the diocese in 1921.

In the course of the Lateran Treaty of February 11, 1929, the Diocese of Paderborn was founded in 1930 by the Prussian Concordat and the Bull Pastoralis officii nostri by Pope Pius XI. raised to the archbishopric . At the same time, the diocese was rewritten: Paderborn gave the dean's office in Erfurt and all the dean's offices of the commissioner's office in Heiligenstadt to the diocese of Fulda and Barmen-Langerfeld and Essen-Kupferdreh to the archdiocese of Cologne . The newly established Central German Church Province comprised the suffragans Fulda and Hildesheim . At that time the archbishopric was divided into 60 deaneries and 533 parishes.

Since after the division of Germany it was not possible to administer the area in the GDR (e.g. Saxony-Anhalt ) from Paderborn, an auxiliary bishop residing in Magdeburg was installed in 1949 , who acted as episcopal commissarius on behalf of the Archbishop of Paderborn.

In 1958, when the Diocese of Essen was established , Paderborn gave the cities of Bochum , Wattenscheid , Lüdenscheid and Gelsenkirchen as well as the Altena and Ennepe-Ruhr districts to the new Ruhr Diocese . The former Paderborn auxiliary bishop Franz Hengsbach became the first bishop of this newly structured diocese . During his time in the Ruhr bishopric he was appointed cardinal .

In a letter dated January 20, 1966, Archbishop Lorenz Cardinal Jaeger ordered the division of the 39 deaneries in the western part of his diocese into seven pastoral regions. These existed for almost exactly forty years until they were dissolved on July 1, 2006.

From July 23, 1973, the eastern part of the archdiocese in the GDR was an apostolic administration . Thereafter, the archbishopric administration for this area was suspended until German reunification . On July 8, 1994, this previous Episcopal Office of Magdeburg became an independent diocese of the new Central German Church Province, comparable to Erfurt , which formerly belonged to Fulda. The Diocese of Hildesheim , which had been part of the Central German Church Province since 1930, became the suffragan of the newly established Archdiocese of Hamburg in 1995 .

→ See also: History of the Principality of Paderborn

The role of the bishops of Paderborn has undergone major changes in over 1,200 years: missionary work, spiritual pastoral care and leadership, political sovereign and commander in chief. Different Paderborn bishops stood for all these roles.

In recent times, some priests and auxiliary bishops of the Diocese of Paderborn have been appointed to higher offices: The bishops of Osnabrück ( Franz-Josef Bode ), Fulda ( Heinz Josef Algermissen ), the emeritus bishop of Würzburg ( Paul-Werner Scheele ), the archbishop of Munich and Freising ( Reinhard Marx ), the Bishop of Speyer ( Karl-Heinz Wiesemann ) and the Curia Cardinal Paul Josef Cordes auxiliary bishops in Paderborn. The Curia Bishop Josef Clemens also comes from Paderborn. In 2012, Auxiliary Bishop Manfred Grothe headed the commission that examined the cost increases in the construction of the bishop's residence in the Diocese of Limburg; on March 26, 2014 Pope Francis accepted the resignation of Bishop Franz-Peter Tebartz-van Elst and appointed Grothe as Apostolic Administrator of the Diocese of Limburg. 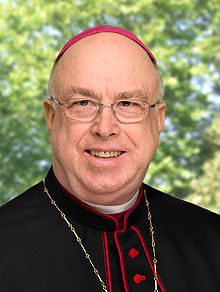 Since 2003 Hans-Josef Becker is the fourth Archbishop of Paderborn and Metropolitan of the ecclesiastical province of Paderborn . His predecessor Johannes Joachim Cardinal Degenhardt was in office from 1974 to 2002.

In the Archdiocese of Paderborn, the regional calendar for the German-speaking area is supplemented by the following celebrations (followed by the rank)

With effect from July 1, 2006, the past pastoral care regions were dissolved by Archbishop Hans-Josef Becker. At the same time he reduced the number of deaneries to 19, most of which he combined into larger units. Since this structural reform of the so-called middle level, the Archdiocese has been divided into the following 19 deaneries:

On January 1, 2010, the diocesan law for the territorial update of the pastoral areas in the Archdiocese of Paderborn came into force. This results in the merging and construction of the large pastoral rooms with the respective seat of the head of a pastoral room . This restructuring is expected to be completed by 2029. Most of the pastoral rooms have already been set up or the accompanying process has started (as of April 2015).

The dioceses of Erfurt , Fulda and Magdeburg are suffragan dioceses from Paderborn.

Like most bishoprics in Germany, the Diocese of Paderborn did not give a public account of its assets until the financial scandal surrounding the former Limburg bishop Franz-Peter Tebartz-van Elst . On September 29, 2015, the Archdiocese published an annual balance sheet for the first time and disclosed its assets. Accordingly, the diocese's assets amounted to a good four billion euros on December 31, 2014. That is around 660 million euros more than the sum shown by the Archdiocese of Cologne in its balance sheet. In contrast to Cologne, the assets of the so-called Episcopal See are not included in Paderborn. The figures on the assets of the episcopal see and the cathedral chapter should not be presented until 2017/18. The budget volume of the archdiocese in 2014 was around 500 million euros. Most of the assets shown on the balance sheet consist of financial assets amounting to 3.6 billion euros. This includes a stock portfolio with a volume of 570 million euros and fixed-income securities (bonds) with a volume of almost 2.7 billion euros. The diocese last achieved a return of 3.1 percent per year. 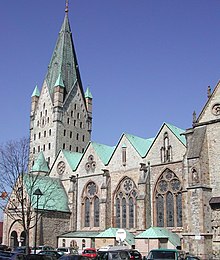 The church province of Paderborn