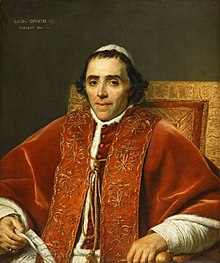 Luigi Barnaba Chiaramonti entered the Benedictine monastery of Santa Maria del Monte near Cesena at the age of 13 and accepted Gregorio as his religious name. After studying philosophy and theology , he taught from 1766 as a professor in seminars of his order in Parma and Rome.

Pope Pius VI , a friend of his family, made him abbot of the monastery of San Callisto in Rome. As a result, Abbot Chiaramonti was appointed Bishop of Tivoli in 1782 , then he was Bishop of Imola from 1784 and on February 14, 1785 the Pope finally elevated him to Cardinal Priest of S. Callisto . After several uprisings, Cardinal Chiaramonti, who pursued a policy of compromise, had to leave Imola and returned to his hometown of Cesena.

During the French invasion of Northern Italy in 1797 ( Italian campaign ), Cardinal Chiaramonti appeared publicly against useless resistance. When the city of Lugo nevertheless resisted and was released for sacking , the cardinal fell on his knees before the French General Augereau and put an end to the sacking.

After the death of Pius VI. 1799, Pius “the Last” (mockery of the revolutionary forces), in Valence there was a conclave in 1800 in the Abbey of San Giorgio Maggiore in Venice under Austrian protection. It took three months because several candidates were politically unacceptable to the Austrians or the French. Finally, Barnaba Chiaramonti was proposed as a neutral candidate outside the Curia, elected as the new pontiff on March 14, 1800 with the support of the secretary of the conclave and influential Vatican politician Ercole Consalvi and crowned Pope Pius VII on March 21, 1800.

His time as Pope was dominated by the situation in France, in which the Church had been largely expropriated and completely smashed by the revolution . Negotiations with Napoleon Bonaparte , in which he dealt with the results of the revolution insofar as they were acceptable to the Church, resulted in the historic Concordat of 1801 , which regulated the relationship between the Catholic Church and the French state for the next 104 years. In it the Pope had to recognize that the Catholic Church was no longer the state religion , although the majority of the French belonged to this church.

Pius VII. Tried in vain Napoleon to restore the church state to move. In 1804, his attempts even led to the humiliation of having to participate in Napoleon's coronation as emperor in Paris. In return, Pius VII only received the approval of a few orders and the abolition of the republican calendar.

In 1806 the dispute between the emperor and the pope escalated: Napoleon declared that the pope was de facto his subject, and he expected the pope to openly take action against Napoleon's enemies. The Pope protested diplomatically - but clearly - against both and refused to take sides in a war. On February 2, 1808, a French division under General Miollis entered Rome, and on May 16, an imperial decree decreed that Rome was directly united with French territory. After the Pope excommunicated Napoleon on June 10, 1809, Pius VII was arrested by General Radet , commander of the imperial gendarmerie , on the night of July 5th and taken as a prisoner to Savona in Liguria . After his deportation to France, he was interned at Fontainebleau Castle in 1812 . Despite strong pressure, Pius remained firm to Napoleon's demands even in exile; he also refused to install new bishops in France while he was imprisoned. He even went on a hunger strike once. According to an anecdote, Napoleon threatened the Pope that he had the power to destroy the Roman Church. Thereupon Pius VII is said to have replied with a mild smile: “Two hundred popes before me did not manage that. Why should you of all people succeed? "

After Napoleon's abdication, Pius was able to move back into Rome on May 24, 1814. In 1815 he received the Papal States back through the resolutions of the Congress of Vienna . Despite the poor treatment by Napoleon, Pius VII granted Napoleon's family asylum in Rome and intervened with the English on behalf of Napoleon.

Through his diplomatic skills and his adaptability, he ensured the rebirth of the papacy as the center of the Catholic Church and as a moral authority. In the same year the Pope also restored the Jesuit order . He hoped that this would overcome the Enlightenment and a revival of religious and ecclesiastical life. In addition, Pius VII initiated the restoration of the papal state, which was carried out in particular by Cardinal Agostino Rivarola . On the diplomatic stage he was assisted by Cardinal Secretary of State Ercole Consalvi, who had already negotiated the 1801 Concordat. With the conclusion of the Concordat with the Kingdom of Sicily in February 1818, Pius succeeded in settling political and religious tensions between the Papal States and Sicily. After negotiations with King Louis XVIII. In 1819 he achieved the re-establishment of the papal nunciature in Paris.

The grave of Pius VII by Bertel Thorvaldsen in St. Peter's Basilica

Pius particularly promoted the arts, he had the sculptor Antonio Canova , whom he appointed as supervisor of the art treasures of the Papal States, set up the Museo Chiaramonti named after him from 1807 , which was reserved for ancient sculptures. The new Braccio Nuovo wing was pulled in across the existing gallery by the architect Raphael Stern between 1817 and 1822. Canova, who arrived in Paris on August 28, 1815, was able to enforce his legitimate demands was appointed to repatriate the art treasures of the Vatican that had been abducted by the French.

In 1818 Pius VII was portrayed in Rome by the English painter Thomas Lawrence on behalf of the Prince Regent George (from 1820 George IV) . De salute animarum is the title of the circumscription bull of the Concordat concluded with Prussia on July 16, 1821 for the reorganization of the Church in Prussia .

Pius VII died in August 1823. The tomb of the Pope by Bertel Thorvaldsen is in the Cappella Clementina of St. Peter's Basilica .