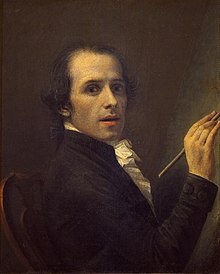 Antonio Canova (born November 1, 1757 in Possagno near Bassano del Grappa , † October 13, 1822 in Venice ) was an Italian sculptor . He is considered to be one of the main representatives of Italian classicism .

Since his father, a stonemason, died when Antonio Canova was three years old, he grew up with his grandfather Pasino Canova, on his father's side. At the age of 14 Canova began an apprenticeship with the Venetian sculptor Giuseppe Bernardi, who was named Torretti after his teacher. After the death of his teacher in 1773, Canova first worked with Bernardi's nephew, the sculptor Giovanni Ferrari, also named Torretti after his teacher. Canova went into business for herself in 1775.

The sculptural group commissioned by his sponsor, Senator Giovanni Falier (1710–1808), represents Eurydice and Orpheus (made 1773–1776). It is now in the Museo Correr in Venice. In 1779 Canova moved to Rome , where he lived as a guest of the Venetian ambassador . The successful artist returned to his homeland after the occupation of Rome by French troops in 1798. In 1802 Canova was accepted as an external member of the Académie des Beaux-Arts . As supervisor of the art treasures of the Papal States (from 1802) he was responsible for the repatriation of the works of art stolen by Napoleon in 1815 . Among his students are Franz Pettrich and Peter Kaufmann .

Grave monument for Archduchess Marie Christine 1805, in the Augustinerkirche in Vienna

After his death in 1822, Canova was buried in a mausoleum in the church of Santa Maria Gloriosa dei Frari in Venice in 1827 ; his heart was buried separately and is in a porphyry vase in the Academy of Venice.

“Now my soul is full of one single object, Canovas Hebe. I do not know whether you already know this artist's lovable goddess; it will rule me for a long time, maybe always. I almost believe now that the new have reached the old. It is said to be one of the youngest works of man, eternal youth. It is in the Alberici house, and the owner seems to feel the full value of the treasure. He has assigned the goddess one of the best places, a beautiful, bright room facing the great canal. I want, I must not venture a description; but I want to prophesy that she will become the artists adored and their pilgrimage. I have not yet seen the medicin; but judging by all the good casts of her, there is more to me here than any 'veneres cupidinesque'. "

This is followed by this poem entitled Canovas Hebe

I stood there, drunk with a sweet intoxication,
As if sunk in a sea of ​​bliss,
With awe of the goddess,
Who looked down on me sweetly ,
And my soul was in sparks:
There was more enthroned than Amathusia.
I had escaped from mortality,
And my fiery glances sucked
Ambrosia
And nectar in the hall of gods from her gaze ;
I did not know what happened to me:
And if Zeus stood close with his lightning
, I would presumptiously reach for the bowl
with which the deity held it,
And now, staggering, perhaps dared
to mock Alciden himself,
And with God for his reward beat.

It is no coincidence that finally in the grounds of the house of George Joachim Goschen in Grimma under the Amicitia- Temple (the Temple of Friendship), a cast of Thorvaldsen'schen in a grotto-like depression lift was installed. After Canova's death, a parish church, the "Tempio Canoviano" , was built in Possagno in the style of the Pantheon in Rome according to the artist's plans by GA Selva and A. Diedo.

As an artist's museum, Canova's birthplace with its paintings and the Gipsotheca Canoviana remained significant in terms of art history.