The Louvre ( [ˈluːvrə] listen ? / I ), officially the Louvre Museum ( French Musée du Louvre ), is an art museum in the 1st arrondissement of Paris . It is located in the historic Louvre Palace , the former residence of the French kings , on the right bank of the Seine

The origin of the collection goes back to the 14th century. The Duke Jean de Berry (1340–1415), a brother of Charles V , put on a collection of paintings, tapestries and illuminations, some of which can still be seen in today's exhibition. 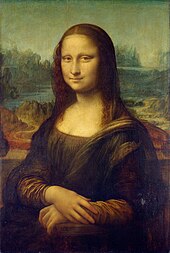 The actual founder of the collection, however, is King Francis I (1515–1547), who is considered the first great collector and patron on the French throne. In 1517 he set up a domicile for the aged Leonardo da Vinci on the Loire . After Leonardo's death in 1519, his pictures - including probably the Mona Lisa  - ended up in the king's collection, which at that time was still kept in Fontainebleau Palace.

Cardinal Richelieu , who was minister under Louis XIII in 1624 . built a large private collection at state expense, most of which passed into the possession of the crown in 1636. In 1660 the collection moved to the Louvre. Precious works were also acquired under Louis XIV , including by Titian and Raphael .

Opening to the public

Under Louis XV. Hardly any new pictures were added to the collection. The fact that the collection was not open to the public led to general criticism, whereupon France's first picture gallery was opened in the Palais du Luxembourg in 1750 . However, it was closed again as early as 1779, as the palace was used as the apartment of the later Louis XVIII. should serve. The paintings were returned to the Louvre depot . The politician Charles Claude Flahaut de La Billarderie planned to create a French national museum .

In the course of the French Revolution , the collection was made accessible for the first time in the Louvre by decree of the National Assembly of July 27, 1793. On August 10, 1793, exactly one year to the day after the abolition of the monarchy, it was opened as the Central Art Museum of the Republic .

After the victorious Italian campaign, Napoleon Bonaparte gave the express order to requisition famous works of art abroad for France. Soon the Louvre could no longer hold the works of art from Rome , Venice , Berlin , Vienna and many other European cities. Under Napoleon I, as part of his large-scale, groundbreaking national culture program, 15 branch museums were created across France, in which pictures from the collection were accessible to a broader public in the French province for the first time. After the fall of the Empire in 1814, Napoleon I's pioneering popular educational approach was no longer pursued; the looted art was brought back from the Louvre by the Allies, whereby the national element of the collection came to the fore again.

In 1821 the collection of antiquities continued with the purchase of the Venus von Milo . The Borghese Collection of Antiquities had been part of the collection since 1808. The Egyptian department followed in 1826 and the Assyrian department in 1847. From 1851 the exhibition space of the Louvre was expanded under Alfred Émilien de Nieuwerkerke . After the fall of the Second Empire in 1870, the collection was finally separated from the Crown and nationalized.

The collection benefited from the fact that since 1972 inheritance tax can also be paid in the form of works of art.

Grand Louvre and its current state 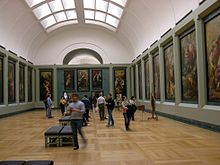 In 1981, President François Mitterrand initiated the “Grand Louvre” project, with which the entire building complex was subjected to museum use; It was completed in 1999. The Treasury moved; In this context, among other things, the Galerie d'Apollon was restored and the glass pyramid was created in the inner courtyard of the Louvre . The glass pyramid was designed by Ieoh Ming Pei and opened in 1989. Today it serves as the main entrance to the Musée du Louvre . Initially mocked as a “greenhouse” and “ cheese dome ”, the pyramid has now become a well-known symbol of Paris.

In addition, the Carrousel du Louvre was opened in 1993 , an underground shopping street with restaurants and the inverted glass pyramid that is directly connected to the Louvre. In 2009 there was a controversy over the move to a McDonald's branch in the redesigned restaurant area.

Since 1986, many works of art from the second half of the 19th century previously shown in the Louvre have been exhibited in the Musée d'Orsay .

In September 2012, the Louvre opened a new department for Islamic art, which is located in an extension based on a design by the architects Mario Bellini and Rudy Ricciotti . Around 2500 exhibits are on display, some of which come from the Musée des Arts Decoratifs .

Since 2016, Liévin am Pas-de-Calais, 180 km away, has been the location of the museum's most important depot, the Center de Conservation du Louvre .

One of several Ottoman ceramic tiles that are being reclaimed

In 2009, the Turkish city of Izmir reclaimed two ancient marble statues of the Greek gods Zeus and Apollo , which were found near the city, ancient Smyrna, at the end of the 17th century. The two works of art, over two meters in size, were brought to France as a gift to King Louis XIV at the end of the 17th century and are currently on display in the Louvre's antiques department. They are to be exhibited in the planned Museum of Civilization on the Aegean in Izmir.

In the Louvre there are 60 Ottoman ceramic tiles from the 17th century, which were stolen from the Türbe Selim II in Istanbul in 1895 by the French restorer Albert Sorlin-Dorigny . Sorlin-Dorigny worked on the restoration of Hagia Sophia between 1895 and 1899 and brought numerous art treasures to France during this time. He replaced the tiles with replicas made in the Choisy-le-Roi faience factory . The Turkish Minister of Culture confirmed the request for the return of the tiles in 2011.

Directors of the Louvre 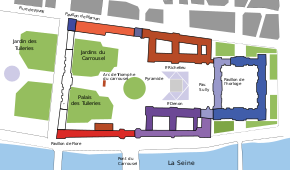 The collection comprises around 380,000 works, of which around 35,000 exhibits are presented on an area of ​​over 60,000 m². In terms of area, this makes the museum the third largest museum in the world. Particularly noteworthy is the quality of the Greek and Roman collections of antiquities, the departments of Italian Renaissance painting and Flemish painting of the 16th and 17th centuries as well as French painting of the 15th to 19th centuries. The French crown jewels are in the Apollon Gallery .

In addition to an extensive digital archive with works of art from its own collection, the Louvre offers online tours through the Egyptian Antiquity Department. Numerous exhibition rooms, halls and the exterior architecture of both the historic building and the famous glass pyramid by the architect Ieoh Ming Pei can be visited in 360 degrees via the Youvisit platform. In March 2021, the museum launched the website collections.louvre.fr, on which 482,943 objects from the entire collection can be viewed free of charge. The Louvre said it wanted to keep the website updated.

Louvre in other cities

In December 2012, the Louvre-Lens opened in the former mining town of Lens . The museum is located on an abandoned colliery site and is intended to help the northern French region to attract more attention and attract more tourists. The Parisian parent company leaves objects from its collection to the Louvre in Lens as medium or long-term loans so that they can be shown there.

The French government and the United Arab Emirates signed a cooperation agreement on March 7, 2007, with which inter alia. the construction of a "miniature Louvre" was agreed, located on the artificial island of Saadiyat in Abu Dhabi , the capital of the emirate.

The 24,000 square meter museum building was designed by Jean Nouvel . The sheikdom, which was planning an annual purchase budget of 40 million euros, was to pay an "Agence internationale des musées de France" 165 million - and annually for 15 years 13 million euros for temporary exhibitions in a 2,000 square meter gallery. In return, French museums will organize temporary exhibitions and also lend further exhibits (initially 300, then less as their own inventory increases, for a maximum of two years per object). Furthermore, the new museum will be allowed to call itself Louvre for the next 30 years ; for this it pays 400 million euros to the Louvre in Paris. The halls in the Louvre in Paris built with the money will be named after the deceased Emir of Abu Dhabi, Zayid bin Sultan Al Nahyan, as Center Sheikh Zayed bin Sultan al Nahyan , and this for an unlimited period of time.

Museum directors, curators and art historians protested aggressively against the commercialization of museum work and the “sell-out of French museums”, according to Jean Clair , former director of the Picasso Museum in Paris and a well-known theoretician of contemporary art. Among other things, it was organized. a collection of signatures against the project.

The opening in Abu Dhabi was initially planned for 2012/13, and construction work began in 2013. The opening was then announced for 2015. The shell construction was completed in June 2016 and the many water basins surrounding the museum could be flooded for the first time. The building is vaulted by a flat, translucent dome made of steel mesh with a diameter of 180 meters and a weight of 7,500 tons. The museum was inaugurated on November 8, 2017 and the official opening for visitors followed on November 11, 2017.