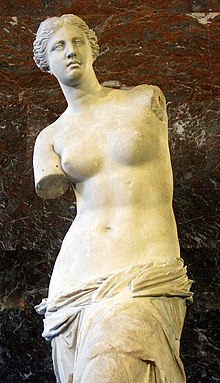 Detail of the front view of the Venus de Milo

The Venus de Milo (also Aphrodite of Melos ), a sculpture of the goddess Aphrodite , is one of the most famous examples of Hellenistic art along with the Laocoon group and the Nike of Samothrace . The 2.02 meter high sculpture was created towards the end of the 2nd century BC. The name of the artist has not been passed down.

The sculpture is made of marble from the quarries of the Cycladic island of Paros and represents the Greek goddess Aphrodite. After her discovery, she was named Aphrodites as Venus in the takeover of the Interpretatio Romana Aphrodites . Alternatively, she is also called Aphrodite of Melos (or Milos).

The sculpture was discovered on April 8, 1820 by the farmer Georgios Kentrotas on the Cyclades island of Milos , which like all of Greece at that time belonged to the Ottoman Empire , in the vicinity of the ruins of an ancient theater. Kentrotas was looking for stone as a building material when he discovered worked marble and sculpture. He summoned some French who were looking for antique objects. The farmer was not aware of the outstanding importance of the find, the French gave him some coins.

The French ambassador to Constantinople , Charles François Riffardeau de Rivière , was able to acquire the sculpture for France through his contacts. After some turmoil, it was initially supposed to be shipped to Constantinople, but the French, especially the embassy secretary Lodoïs de Martin du Tyrac , knew how to prevent this. Riffardeau donated the sculpture to the French King Louis XVIII. He had it installed in the Louvre in Paris , where it is still located today.