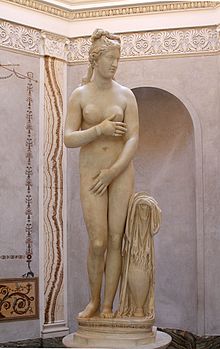 The assumption that Venus was originally an Italian goddess of farmland , gardens , spring and as such a goddess of farmers and winemakers is no longer supported today. There are no signs of an early cult either. She did not have her own flamen (priest) and even the oldest calendars do not record a festival of Venus. Since the 4th century BC She was often equated as the "goddess of love" with the Greek Aphrodite , whose cult spread to Italy as Venus Erycina from Sicily , especially from Mount Eryx . The first archaeological evidence was the discovery of a representation together with Persephone on a mirror from Praeneste . She achieved special importance as the goddess of the Latin covenant and as such had sanctuaries in Lavinium and Ardea .

In Rome in ancient times she was particularly revered as Murcia, in which one later wrongly wanted to see the "myrtle friend" (Myrtea) , and as Cloacina . As Venus Libentina or Venus Lubentina , she was the goddess of sensual pleasure. The corpse goddess Venus Libitina was equated with this "[...] because of the similarity of names". The utensils necessary for burial were kept in their temple and the lists of the dead were kept. Parallel to the development of Venus, the equation of the Oscar goddess Herentas with Aphrodite took place in Campania . The first Roman temple of Venus was built in 295 BC. Consecrated by Quintus Fabius Maximus Gurges . 217 BC After the Battle of Lake Trasimeno, a temple was praised by Mount Eryx and built on the Capitol at the behest of the Sibylline Books of Venus .

The legend that Aeneas was the son of her and Anchises was extended to the effect that he emigrated to the central Italian region of Lazio after the destruction of the city of Troy . According to this version, Venus first led her son safely out of the sinking Troy together with the old father Anchises. As the goddess of love, she then made sure that the Carthaginian queen Dido fell in love with Aeneas and gave him refuge. She also intervened on the side of her son in the decisive battle against Turnus and brought his spear back to him. Aeneas is said to have brought a portrait of her to Lavinium.

In addition to the many forms of worship that Venus enjoyed and which corresponded to the Greek cult of Aphrodite, she has a special meaning as Venus genetrix, that is, as the ancestral mother of the Roman people through her son Aeneas ( Aeneadum genetrix ). She especially revered the Julier family , who derived their descent from their grandson Iulus , son of Aeneas, as ancestral mother. With this in mind, Julius Caesar established her as Venus genetrix on the forum he had laid out in 46 BC. A splendid temple where every year eleven days of games were celebrated ( Veneralien ). Gaius Octavius, called Augustus , also referred to them, which is made clear by the fact that a dolphin (the animal assigned to Venus) is depicted at the foot of the armored statue of Prima Porta , which shows the Princeps. As the ancestral mother of the entire Roman people, the 135 completed double temple of Venus and the Roma near the Colosseum (later called templum Urbis Romae ) was consecrated to her together with Roma by Hadrian , of which only ruins remain today.

Venus was sacred on April 1st, on which she was worshiped by the Roman matrons alongside Fortuna Virilis (goddess of happiness for women among men) and Concordia as Venus Verticordia (turn of the female hearts for discipline and custom). Of lesser importance were the cults of Venus Obsequens (the compliant), Venus Salacia (goddess of courtiers) and others. Also in Campania , probably due to Greek influences, the cult of Venus was in high esteem, here she was, for example, the city ​​goddess of Pompeii as Venus Fisica .

After Venus, the fifth day of the week was called Veneris , hence ital. Venerdi , French. vendredi , esperanto vendredo , span. viernes . The South Germans equated her with their goddess Frija (North Germanic Frigg ), hence the German name Friday . The planet Venus is also named after her. 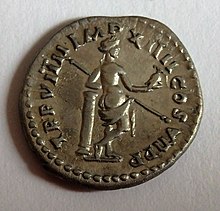 In Roman times, Venus was often used as a motif in small-scale and craftsmanship, which also mass- produced goods using inexpensive materials . Occasionally, Venus was depicted on the reverse of coins.

Since the painting of the Renaissance , the mythological Venus, along with Eve, was of decisive importance as a model for the female nude . Venus was depicted with Adonis and Mars and their son Amor or their birth from the sea ( Sandro Botticelli ). Often the standing Venus ( Lucas Cranach the Elder ) or the resting Venus ( Giorgione ) were simply painted.