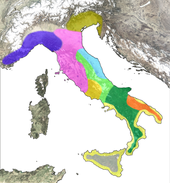 The Latins were a main tribe of the Italians , closely related to the Faliskern . They may have migrated at the beginning of the 1st millennium BC. In the area of ​​today's Italy . The Latin language ( lingua Latina ), named after the Latins, became a world language with the rise of Rome .

The Latins lived on the lower reaches of the Tiber . In Roman tradition, the term "Latiner" is traced back to Latinus , the king of the mythical Aborigines .

There was a union of Latin cities under the leadership of Alba Longa , the unifying element was the cult of Iuppiter Latiaris . Other Latin cities were Aricia , Astura , Bovillae , Circei , Gabii , Lanuvium , Lavinium , Praeneste , Tarracina , Tibur and Tusculum . In Latium were also the cities of Antium and Velitrae ( Volsker ), Ardea ( Rutuler ) and later the Roman colony Ostia .

In the 6th century BC The Latins were significantly more powerful than Rome , which in its later tradition, however, dated the destruction of Alba Longa in the 7th century and thus underpinned its claim to rule. In the two so-called Latin Wars , Rome fought for supremacy over Latium: In the 4th century BC. BC it gained the upper hand and dictated a treaty that trade would only take place "via Rome". The victory of Rome in the Second Latin War (340–338 BC) marked an important step in the expansion of Roman land power beyond the boundaries of the urban area.

The Latin communities in the immediate vicinity of Rome held a special position among the Italian allies of Rome (the so-called Latin law ). In terms of private law, their citizens were on an equal footing with the Romans and were allowed to vote in the Roman people's assembly . They acquired Roman citizenship by moving to Rome .

There was also a second group of municipalities under Latin law: it was the settlements that Rome laid out as colonies . The citizens of these colonies enjoyed roughly the same rights as the Old Latins (so-called Latinity ). Such colonies with Latin law existed mainly in Spain, North Africa and southern France.