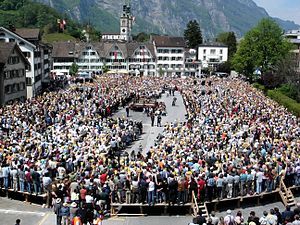 Voting by the rural community in the Swiss canton of Glarus in 2006.

The people's assembly , ( Greek ἐκκλησία, ekklesia ; Latin comitia (pl.) For the various assemblies) is the public gathering of the citizens of a state or other regional body (e.g. a municipality ) for various political purposes.

These can include the public discussion of political issues, their decision by voting , the election of political office holders or other acts. The People's Assembly is the institutional counter-draft to the modern parliaments of representative democracy , in which specially appointed and usually full-time representatives of the people come together for political advice and decision-making and from whose activities normal citizens are usually excluded.

The historical origin of the people's assemblies lies in antiquity , especially in ancient Greece , where numerous city-states ( poleis ) had this sometimes more sometimes less formal establishment of the ἐκκλησία. The best known is certainly the Athenian people's assembly (see Attic democracy ), in which all Athenian citizens were allowed to participate and which met several times a month in a fixed place to decide the most important issues of the state. But there were also popular assemblies in the Roman Republic , the most important of them being the Comitia Centuriata .

In old Germanic law , the term thing is used for popular assemblies . It has been preserved in Althing in Iceland and in some places in Switzerland in the form of the Landsgemeinde (e.g. Landsgemeinde (Glarus) ) or at the local level in smaller communities as a community assembly.

People's assemblies in the literal sense of the word are extremely rare in today's political systems, since in representative democracy the sovereign electorate only takes part in the election and is then represented by their representatives ( MPs ), as well as through "extra-parliamentary" forms of political influence (e.g. through demonstrations ), participates in political decision-making. In some Swiss cantons and in smaller municipalities in New England ( e.g. Groveland (Massachusetts) ), popular assemblies are still part of the political order, but then sometimes form the center of political power.