This article deals with demonstrations in a political sense. Further meanings are listed under demo . 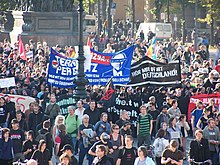 Demonstration freedom instead of fear 2007 in Berlin

Protester wearing a gas mask in front of the White House in Washington, DC during the " We Can't Wait " protests in February 2006

Posters and banners are part of a demonstration

A demonstration (from Latin demonstrare , show, point out, prove, short form: demo ) in the political sense is a public gathering of several people for the purpose of expressing opinions .

In Germany, the right to demonstrate is a fundamental right that is anchored in Article 8 (freedom of assembly) of the Basic Law .

Forms and actions of demonstrations can be very diverse: They range from human chains, rallies, silent marches , vigils to protest actions such as sit-in strikes or blockades , from individual actions to mass demonstrations. They can be peaceful or violent. Demonstrations usually take place as a march or protest march , often only or combined with a standing rally. Other special forms are, for example, Critical Mass , Tour de Natur or demonstrations lasting several days. New forms of protest are online demonstrations and other mass activities organized on the Internet.

The reasons for and topics of the demonstrations are varied: They range from rallies against government policy, against animal testing, for peace, criticism of globalization, for environmental protection, for a certain immigration policy, for or against the construction of new roads, against the transport of nuclear waste, counter-demonstrations, for union goals, for more university funds or against tuition fees.

In the event of serious incidents that endanger public safety or health, governments can apply emergency laws which, in addition to the freedom of assembly, also restrict the right to demonstrate. However, the restrictions on freedom of assembly and the right to demonstrate during the Corona crisis are restrictions on individual fundamental rights and should not be confused with the emergency laws, which are broader. The emergency laws were passed on June 28, 1968. They have never been used.

The right to demonstrate is a fundamental right and is enshrined in Article 8 of the Basic Law in Germany . For meetings in the open air, the article allows restrictions based on a law.

Legally one speaks of an assembly. Jurists distinguish between the concept of assembly in Article 8 of the Basic Law (which only grants "Germans the right to assemble peacefully and without arms") and that of the simple statutory right of assembly (which also grants non-Germans this right and also applies to armed or unpeaceful demonstrations) .

Since the federal reform of 2006, the right of assembly falls under the exclusive legislative competence of the federal states . The Assembly Act of the Federation continues to apply in accordance with Article 125a, Paragraph 1 of the Basic Law , unless the Länder replace it with their own laws. So far, only Bavaria, Lower Saxony, Saxony and Saxony-Anhalt have made full use of this option. So far, Berlin has only passed one law that expands the powers of the security authorities to make image and sound recordings at meetings. In addition, the Federal Assembly Act continues to apply in Berlin.

Meetings in the open air must be registered in Germany , but not approved. There is no ban on gathering , unless the demonstration directly endangers “ public security or public order ”. Similar regulations apply in Austria , but here all generally accessible meetings must be registered 24 hours in advance - including those that do not take place in the open air. Cultural and election campaign events are excluded from the registration requirement. Failure to register a meeting will result in an administrative penalty, but this is no reason to dissolve the meeting.

During the demonstration, the right of assembly applies to all those involved in Germany, replacing police law as a lex specialis . Police measures are therefore subject to stricter legal limits.

In Germany, Austria and some cantons of Switzerland, for example, there is a ban on masking at demonstrations , which prohibits participants from covering their faces or carrying certain objects with them.

Peasant demonstration on the Bonn market square on February 27, 1971

On February 15, 2003, over 10 million people demonstrated against the impending Iraq war , most of them in Europe. In Berlin alone around 500,000 people took to the streets.

In non-democratic states, such as the former Eastern Bloc states , only state-ordered, state-sponsored demonstrations were allowed. Other demonstrations were violently suppressed (for example on June 17, 1953 in the GDR ). Another example was the student protests in the People's Republic of China in 1989 , which were bloody ended by the army at gunpoint in the Tian'anmen massacre .

The Monday demonstrations in 1989 in the final phase of the GDR were completely non-violent.

In 2007, left-wing, anti-authoritarian groups created the Out of Control demonstration concept in order to systematically make police operations and tactics such as hiking kettles or the preventive surveillance of gatherings more difficult.

Thanks to the widespread use of cell phones and social networks , it is now possible to inform a group of like-minded people about an event and / or to call them up much faster than in the past. This also favored rallies in Iran and China as well as the revolutionary upheavals in 2011 in Tunisia, Egypt and other countries (see Arab Spring ). 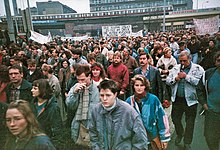 Demonstration against the 2018 Academic Ball at the Ring

Sound recording of a demonstration in the Netherlands on January 1st, 1980 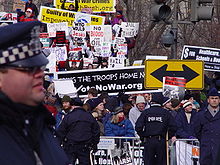 Peace demonstration in the USA, 2005

Wikinews: Demonstration  - on the news